Samsung’s been in the smartwatch game longer than most. The first Galaxy Gear hit the market way back in 2013, beating out the Apple Watch by 18 months. It doesn’t get nearly as much love (or market share) as Cupertino’s offering, but Samsung’s established a nice place for itself in the category, recently surpassing all of Android Wear’s market share.

The company’s success in the category arrived, in part, due to its very Samsung-esque approach of jamming as much functionality as humanly possible into the hardware. That was in full display on the Gear S3, which was essentially the Galaxy Note8 of smartwatches. Flashy, feature-filled and downright gigantic. But while bigger is better has been a winning strategy for the company’s smartphones, the same logic doesn’t apply to wearables. After all, you’ve got wrists to think of.

Indeed, 46mm is a lot of watch — and that’s doubly the case when the profile expands to include all sorts of smartwatch innards. The result was a watch that felt downright unwieldy on my own wrists — and I’ve got fairly average-sized wrists for a dude who’s around 6 feet tall. I can only imagine how the thing must have felt on a smaller wrist. I understand where Samsung’s coming from, a more is more design perspective, but the nature of a device that size precludes a pretty large part of your potential audience.

I met with Samsung ahead of the Gear Sport’s sale date, and while the company wouldn’t come right out and admit that the device was a response to some of the negative feedback stemming from the standard S3’s large footprint, it did acknowledge that the Sport’s 42mm size does open the product up to a wider spectrum of wearers. Now, 42mm isn’t exactly compact — the device still seems unlikely to attract a large female fan base — but it’s much better.

Honestly, for a company that’s never shied away from potentially flooding the market with a million different devices in the same category, it’s tough to rationalize the fact that the company didn’t release the Sport SKU alongside the original S3 (which already came in two different configurations). Instead, it’s waited half a year and released the device with a “sport branding,” introducing a few workout-specific features that will eventually trickle down to the Gear S3. 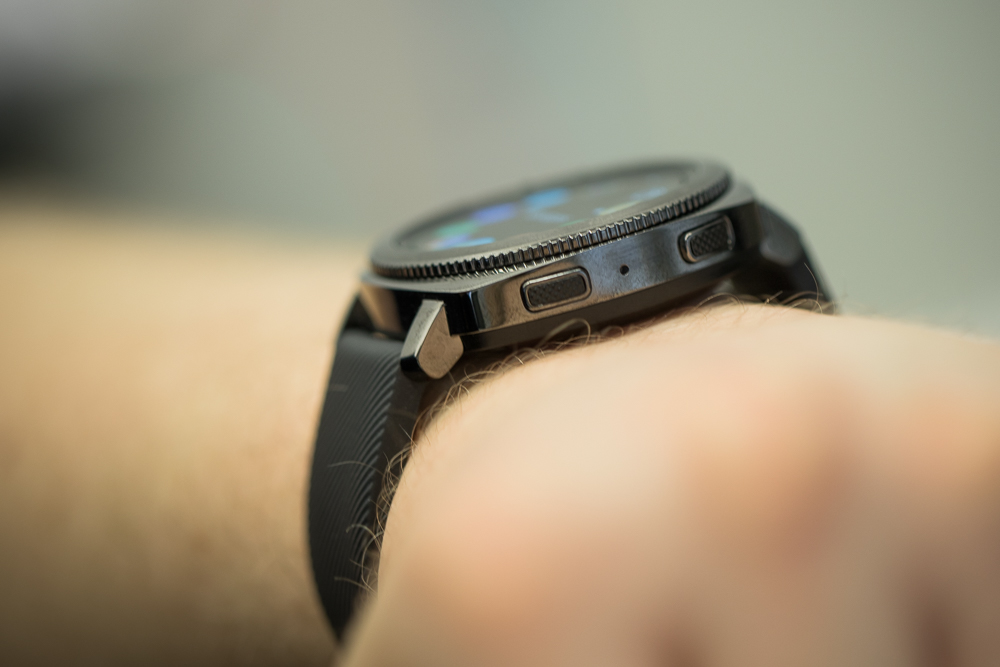 But better late than never. Turns out a few millimeters’ worth of case size makes a hell of a lot of difference. On my wrist, at least, the Sport fits comfortably, fading into the background until you need it, the way a good wearable should. I never got there with the original S3 — it’s just too big and bulky and metallic to ever really forget the fact that you’re wearing the thing.

The industrial design is essentially the same as the standard S3, albeit somewhat shrunk down. Where you come down on that fact is, of course, entirely a matter of personal preference. The devices are certainly flashier than other smartwatches on the market. Frankly, I’ve always felt like the S2’s minimalist design language was the peak for the company — and easily one of the best-looking smartwatches to date.

The S3 is bigger, bolder and more metallic, with a serrated ring around the face. But again, the size makes all the difference, and it certainly doesn’t feel as garish this time out. The rotating bezel is still present — which is always a good thing. It’s easily my favorite navigation interface in smartwatches, beating out Apple’s spinning dial. It’s an easier and more intuitive control scheme. 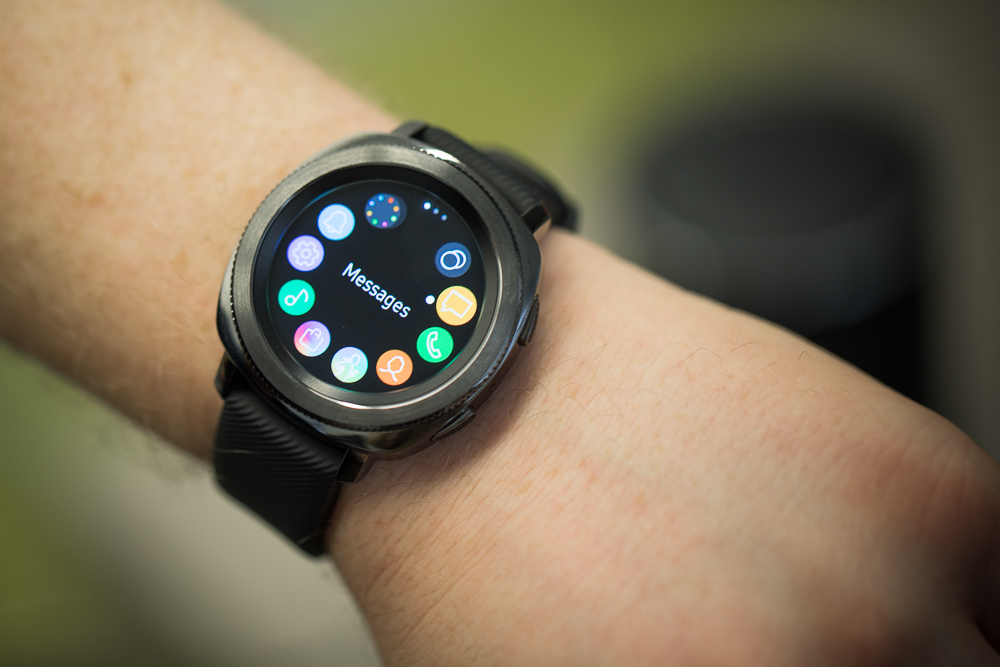 Samsung’s dedication to the Tizen operating system has also  surprisingly paid off. The company has really made the Linux off-shoot its own. It’s clean and easily navigated with an orderly circle of apps that line the edge of the screen. Navigation is smooth and I didn’t run into too many issue with the phone, though I got a number of false positives with the phone triggering voice control at random interval — something the company tells me it’s looking into.

The app selection isn’t quite where Samsung wants it to be (the company broadly says it has “thousands”), but the fact that the company has made Tizen the No. 2 smartwatch OS likely goes a ways toward convincing developers to make the leap.

For its part, the company seems to be activity courting some of the big names. That’s certainly the case with Spotify. The company has worked directly with the streaming service to bring offline mode to the watch. Unlike its larger sibling, there’s no LTE version of the Sport, so the ability to drag and drop music is kind of the next best thing. The watch has 4GB of storage on board, which the company says translates to “about 500 songs.” At the very least, that should get you through a run.

The other biggie here on the software front is the addition of iOS compatibility, which should be a big boon for the company’s wearables. Of course, you’re going to have the fullest experience if you use the watch with a Samsung device (or even one from another Android manufacturer), but that’s just the way these things work. 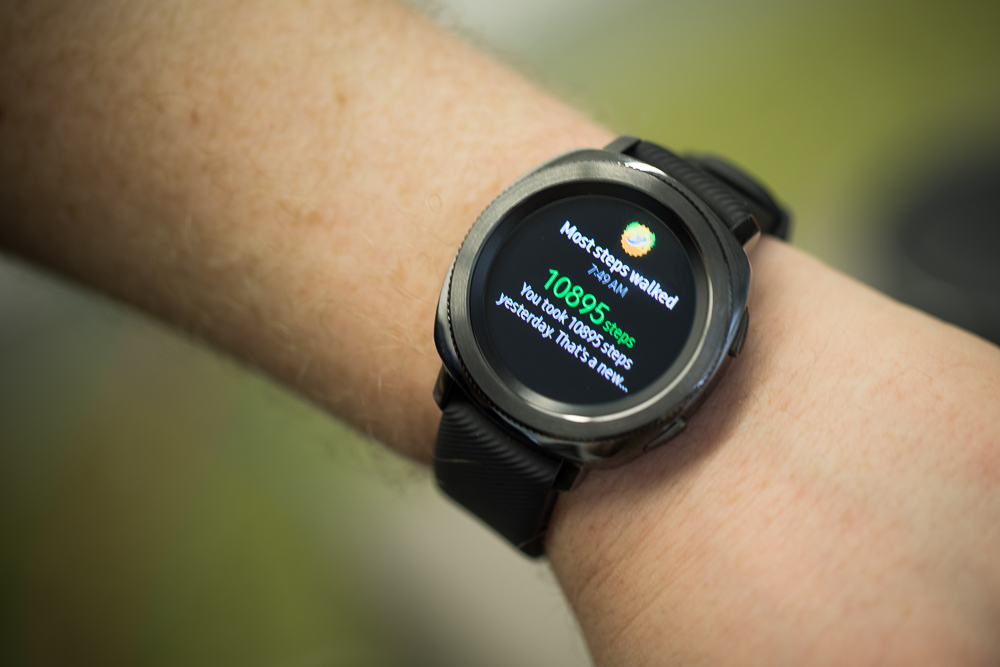 The Sport name is a nod to the addition of swim tracking (the watch has five ATM) water-resistance and apps from companies like Speedo. Most of those will ultimately filter down to the S3, meaning that the Sport’s standout features moving forward are going to be sizing and pricing, at $299, down from the S3’s initial $349.

Those pieces, built on top of the wearable’s growing suite of features, add up to a pretty compelling smartwatch experience.