Demand for the iPhone X has been “off the charts,” according to Apple, which led to the new device selling out in a matter of minutes. Well, that and the limited quantities available at launch. According to several reports, ship times dropped from two to three weeks for all models to up to five weeks only 10 minutes after pre-orders opened up. Because of the scarcity of the hotly anticipated device, sellers have been scalping their pre-order confirmations on eBay, hoping to cash in on consumer demand.

According to the latest figures from eBay, there were more than 1,200 listings posted on its site within 45 minutes of the pre-sales opening at 12 midnight PT today.

We ran an “iPhone X” search now, and found more than 4,480 live listings, the majority being “Buy It Now” offers instead of auctions.

eBay also tracked a big spike in “iPhone X” searches on its site.

From midnight until 1 PM ET, there were 36,555 searches for iPhone X, the company tells us. 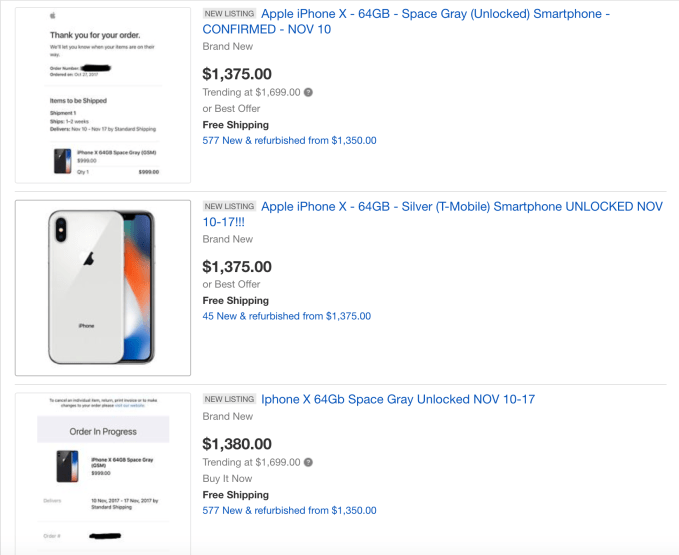 While it’s too soon to say what the average selling price is — that will require more sales data over a longer period of time to be accurate — eBay says most of the listings appear to be in the $1,500 price range.

And let’s not forget that some people have posted their iPhone X  pre-order confirmations for sale at prices that can only be chalked up to “wishful thinking” — like tens of thousands of dollars or more. 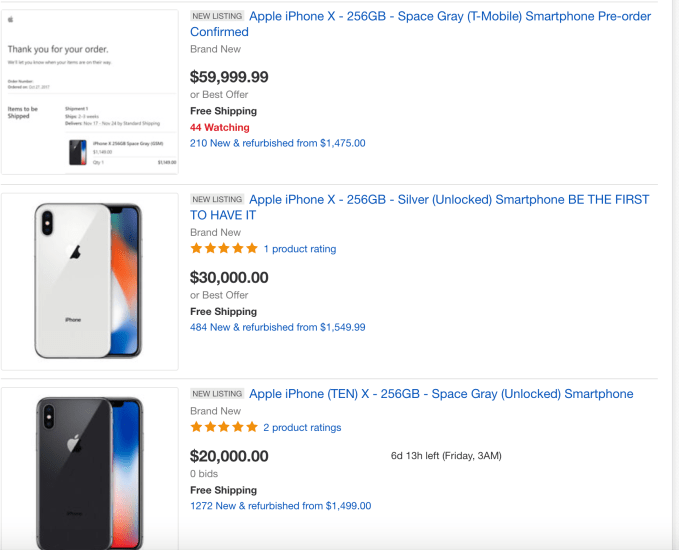 Good luck getting someone to pay $60K for the new iPhone, dude!

The benefit to shopping for the phone on eBay is that you’ll be able to get it quicker than the ship times Apple is now able to promise, even if you’re paying more. You’ll also have a good selection of devices to choose from by carrier, finish or storage space.

As for the lack of inventory, Apple would like you to believe it’s all demand-related. The company today issued a statement to that effect, saying:

We are thrilled to be taking orders for iPhone X, the future of the smartphone. We can see from the initial response, customer demand is off the charts. We’re working hard to get this revolutionary new product into the hands of every customer who wants one, as quickly as possible. We will keep accepting orders online, and iPhone X will be available at Apple retail stores on Friday, November 3 starting at 8 a.m., as well as from our carrier and retailer partners around the world.

However, it’s not possible to know if whether it’s really high demand that led to the quick sellout, as Apple did not share how many devices it had available at launch. Some analysts, however, had said they expected only two to three million would be on hand ahead of iPhone X’s November debut. To put that into context, the iPhone 6 sold more than 10 million units its first weekend. (Apple no longer releases first weekend sales figures for new iPhones.)

eBay will continue to track iPhone X sales over the weekend, and we’ll update if and when the company has more data to share.