That’s according to a new report from Canalys which claims smartphone shipments in India crossed the 40 million mark for the first time in Q3 2017 courtesy of 23 percent annual growth. That means that India has overtaken the U.S. on sales with only China ahead of it.

Given the huge gulf in populations — India’s stands at over 1.3 billion while the U.S. is around 320 million — the move had been expected for some time, but recent developments, including demonetization in late 2016, set progress back during recent quarters.

“This growth comes as a relief to the smartphone industry. Doubts about India’s market potential are clearly dispelled by this result,” Canalys analyst Ishan Dutt said in a statement.

Despite the landmark, watchers have long said that India’s smartphone market is one that will require patience. China, for example, is far ahead with more than 110 million shipments per quarter but issues such as complicated supply chains, local retail laws, import taxes, lower GDP and poorer quality internet are likely to restrict India’s sales for some time.

India may not be at China levels yet, but there are plenty of familiar names from the country that dominate the India market.

Earlier this year, Chinese brands and Samsung squeezed India’s phone companies from the top seller list and they continue to lead the field today.

According to Canalys’ numbers, Samsung remains top with 9.4 million shipments in Q2, up nearly 30 percent, but Xiaomi seems set to overtake it soon after growing by over 290 percent year-on-year to reach 9.2 million units.

Chinese trio Vivo, Oppo and Lenovo rounded out the top five, while Apple is nowhere to be seen. The U.S. is said to have shipped a record 2.5 million devices in India in 2016, with progress made in urban areas. However the comparatively high price of the iPhone makes it difficult to gain wide mainstream adoption despite the introduction of lower-priced devices and discounts for older models. 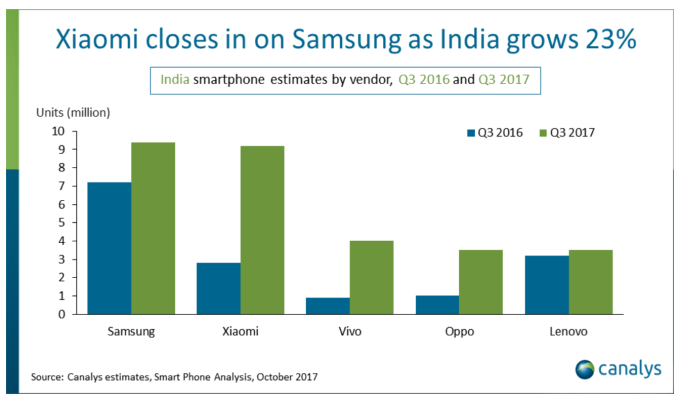