Former Apple intern Christian Selig says he wasn’t happy with the selection of iOS apps for browsing Reddit, so he decided to build his own. The developer this week launched his own Reddit client called Apollo, which offers a beautifully designed browsing experience for either iPhone or iPad, as well as customizable gestures, a media viewer, a full Markdown writing editor and other features inspired by Reddit user feedback.

“Other Reddit apps for iOS don’t follow iOS design guidelines well, and look quite out-of-place as a result, creating an unfamiliar experience for users that doesn’t mesh well with the rest of the iOS ecosystem,” explains Selig, about why he was motivated to build a new Reddit app. “They also don’t serve as a full replacement for the desktop website,” he added.

With Apollo, he hopes to offer not only a better mobile version of Reddit, but one that beats browsing the site via the web, too.

The first thing you’ll notice about Apollo is its look-and-feel, which does feel more in line with Apple’s design than some of the other Reddit clients on the market today. It’s a beautiful, clean and modern app, and is easy to navigate. 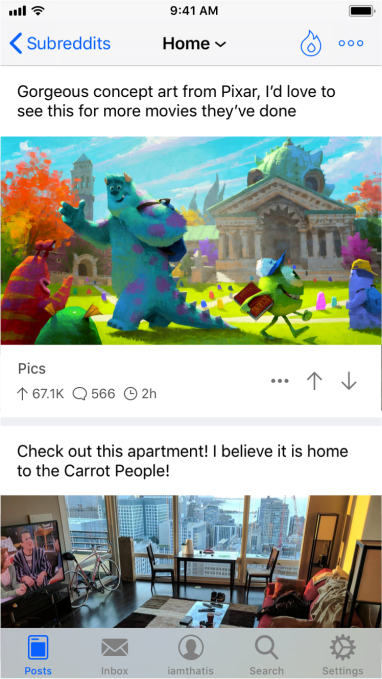 The app includes five tabs: Posts, Inbox, Account, Search and Settings, all accessible from the bottom of the screen.

From the main screen (Posts), you’re able to browse the Reddit homepage in either an expanded or compact mode. The former is the default and is a better experience for viewing the imagery and videos accompanying the posts, but if you prefer a denser look, you can switch over to compact mode from the “more” button at the top-right of the screen.

From there, you can also sort the feed by what’s hot, favorite items, hide the posts you’ve read and share items. 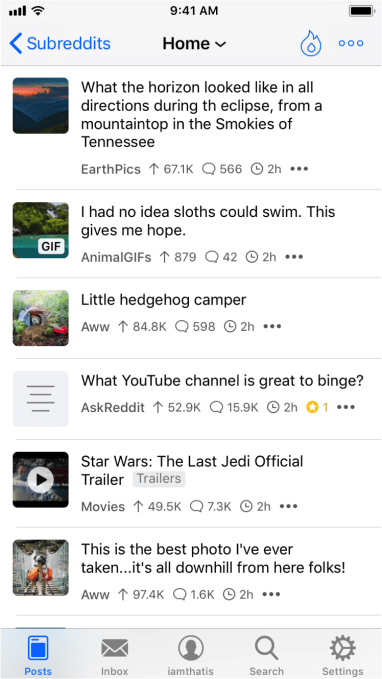 From the viewer, you can upvote or downvote the content, tap to view the comments, or access more functions, like saving the image or GIF to your device, opening the content in Safari, sharing or saving the item or tapping to view the user’s profile or the subreddit. 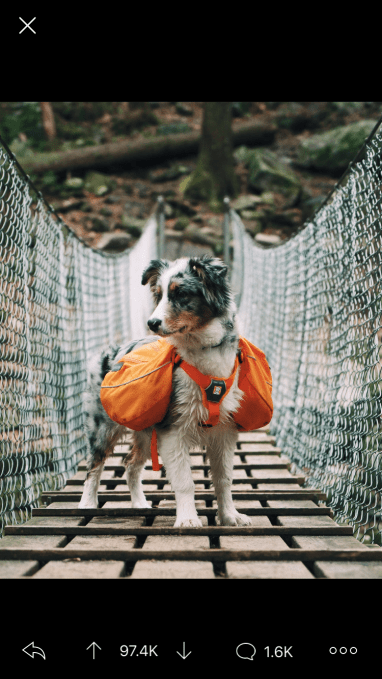 There are a number of little touches in the app that speak to the thoughtfulness behind its design. For example, while you’re reading through comments, you’ll notice with each indent in a long thread, the line next to the comment has a different color, making it easier to differentiate between the posts.

When comments include links, they open in a web viewer right in the app, instead of launching Safari. That way, you can view the link, then tap “Done” to quickly return to the discussion. 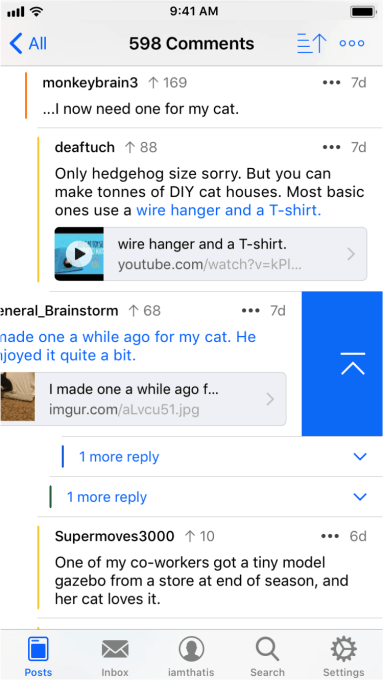 The app makes good use of gestures, as well.

You can swipe on posts and comments to collapse them, reply, upvote or downvote and save. However, in the Settings section, you can completely customize these gestures to your liking, including those for your inbox, profile posts and profile comments, too.

Beyond changing the gestures, Apollo is highly customizable in other areas, too. You can pick between a light theme or dark, and can even configure it to turn on based on things like screen brightness or local sunset times. (Or you can press and hold on the nav bar to toggle it at any time.) 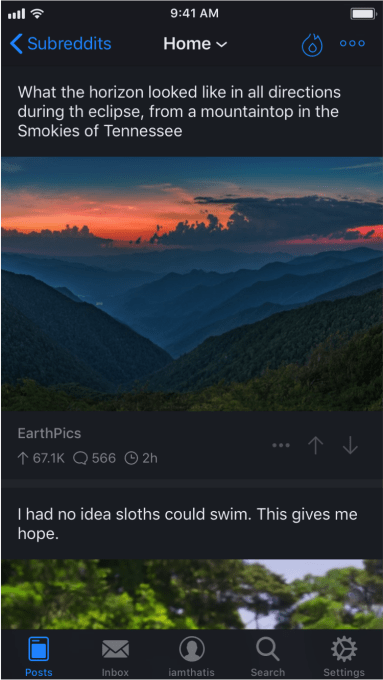 You can pick which favorite subreddits appear in the app’s “Jump Bar” (nav bar).

You can head into the Settings to configure more controls, like filtered keywords, filtered subreddits and blocked users.

And you can add multiple accounts to the app — something that should appeal to those who like to keep their identities separate.

You can even change the default app icon from a selection of more than a dozen. 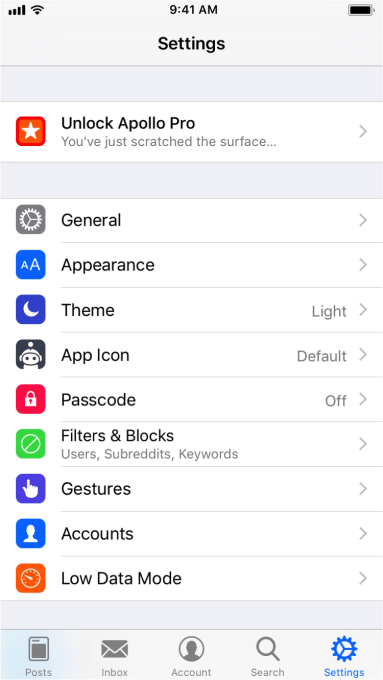 Because of Selig’s familiarity with Apple, he’s put the latest technologies to good use in the app. In addition to being built in Swift 4.0, it also uses 3D Touch extensively, as well as the Taptic Engine, Safari View Controller, and implements Apple’s smart invert introduced in iOS 11.

“Fundamentally though, it was built entirely with Apple technology to take full advantage of the platform and really feel at home on it and immediately familiar to anyone who uses iOS,” Selig says. “In a nutshell, my goal was to make it feel like if Apple built a Reddit app, so I’d consider it a really great first class citizen of iOS.”

While many of the features and customizations will please heavy Reddit users (and so far, their feedback is largely positive), the app also appeals to those who aren’t part of Reddit’s core base, because of its attractive design, emphasis on media content and ease of use. 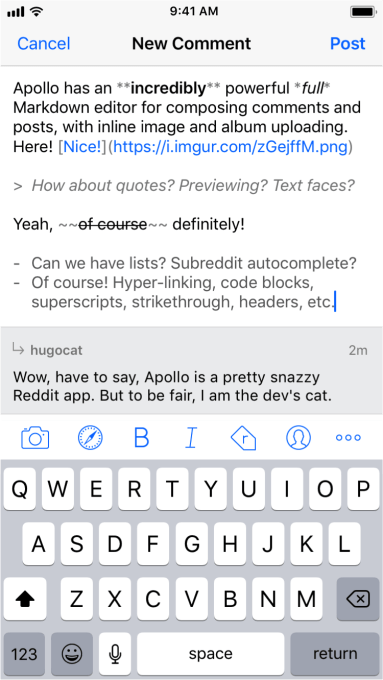 Apollo is a free download, but an in-app purchase of $2.99 will unlock extra features, including the ability to submit posts using the Markdown editor (free users can submit comments with the editor), the Automatic Dark Mode, the ability to customize your gestures, change the app icon and more.

Thankfully, the app is not cluttered by ads, but there is an in-app Tip Jar — a newly permitted option for app developers.

The app is clearly a labor of love from someone who really enjoys Reddit. And it’s been in the works for quite a while, as it turns out.

Selig, who’s based in Halifax, Canada, says he’s been working on Apollo since September 2015 — when he graduated from Dalhousie University where he had studied Computer Science. And he worked on it part-time the year before, after he briefly interned with Apple as an iOS developer on the Enterprise iOS team.

He now plans to continue working on Apollo full-time, but may do some independent contracting on the side if time permits, he says.