It’s been quite a day for Twitter and the West Coast is barely past breakfast.

Besides a surprise earnings beat and the decision to ban Russian media firms RT and Sputnik from its advertising platform, the day is also notable for Twitter’s share price jumping 15 percent in early trading on news it could be profitable before the end of this year.

Twitter managed to slim its quarterly losses to just $21 million in Q3 2017 despite a shrink in revenue, and its predictions for the final quarter of the year are even more optimistic.

From its letter to shareholders [PDF]:

We also expect that at the high end of our adjusted EBITDA range, we will likely be GAAP profitable

Combined with the Q3 results, this disclosure went down well with investors who have become accustomed to minimal user growth and continual losses. 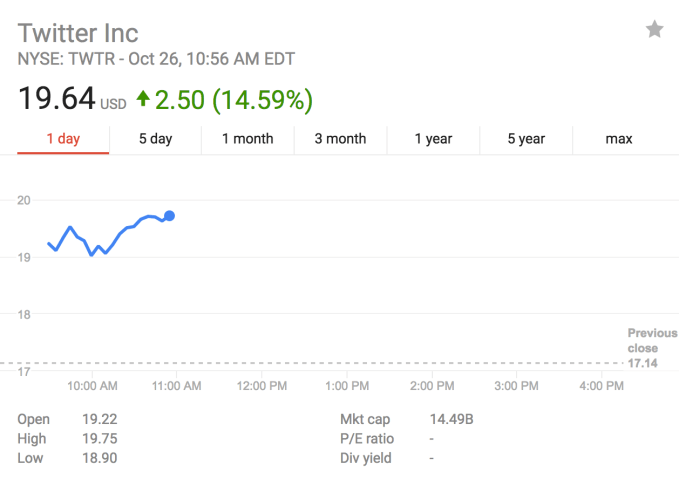 A major factor for Twitter’s potential profitability is that it is handing out less share-based compensation for employees, but there are other bright spots right now for Twitter. Total monthly users are growing (up four percent) and, while U.S. revenue dipped slightly in the last quarter, income from overseas grew by six percent.

Plenty of work still to do, but adding a profitable quarter to the mix would be another positive move forward.