The acquisition was finalized on October 18, after being announced publicly last month. It seems the two companies aren’t wasting time joining forces.

Specifically, the Mevo Plus includes a more powerful 802.11ac Wi-Fi chip and Bluetooth 4.1 as improvements to its wireless capabilities, and it has over 100 feet of range – or five times that of the first generation devices.

Faster transmission is achieved by the introduction of 2×2 MIMO antennas, increased connection range, and better connectivity in noisy environments.

In-app editing tools let Mevo Plus users cut, pan, and zoom between multiple live shots – like TV industry professionals do. They can also use an Autopilot mode that leverages face detection and scene analysis in order to pick the most interesting shots, then edits the stream for the user.

Additionally, users of the new Mevo Plus, Mevo, and Studio software are now able to instantly stream to their Vimeo Live accounts, as part of the integrations between the two companies’ products.

The Mevo Plus can also stream to Facebook, YouTube, Twitter and Periscope, and its updated software also includes support for electronic image stabilization, 1080p streaming and 4K recording. 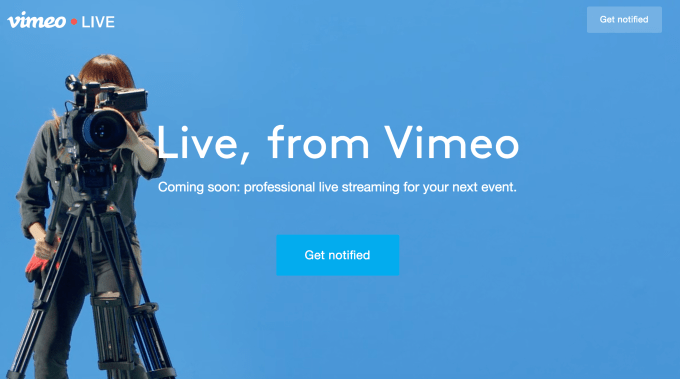 The move into live streaming makes more sense for Vimeo than its scrapped plans for subscription video-on-demand, given its core business has already been focused on selling tools and other services to professional and semi-pro video creators through plan upgrades. Plus, some customers use Vimeo’s VHX to sell their films, shows and web series across platforms, including Foo Fighters, NPR’s “This American Life,” Comedy Central, Drafthouse Films, and others.

With Livestream operating as a part of Vimeo, its customers can now host their own live events, too. And Livestream’s over 10,000 paying subscribers can take advantage of Vimeo’s larger video streaming platform.

“The past month has been incredibly affirming: Vimeo and Livestream are united in our commitment to democratize the storytelling process and give more creators access to capabilities that were previously limited to a select few,” said Anjali Sud, CEO of Vimeo, in a statement.

”Mevo Plus is a remarkable tool that puts the power of a TV studio in your pocket, and is the first camera that integrates directly with the Vimeo platform. We are excited to launch deeper integrations in the coming months that will make live event production infinitely easier,” she added.

Sud has only held the CEO position for just over 100 days, after earning the spot following a year-long search. Previously in charge of Vimeo’s creator business, Sud has now refocused the company’s vision on that creator business, acquired Livestream, and helped launch Vimeo’s first hardware product.

The Mevo Plus goes on sale today in the U.S. at Best Buy, Amazon, B&H, Adorama, and getmevo.com for $499.99. The first generation camera will continue to be sold while inventory exists, for $299.99.