Twitter is responding to political scrutiny over the role it may have played in spreading Russian misinformation, and to a bipartisan Congressional bill proposing new regulations for online ads, with some new initiatives of its own.

So it’s launching an Advertising Transparency Center where users should be able to see all the ads running on Twitter, the content/creative of those ads, how long they’ve been running and which ones are targeted specifically at you. Anyone can then report an ad as inappropriate or simply say that they don’t like it.

Twitter also says it will be shining a spotlight on political ads, specifically ads in support of a particular party or candidate. Those “electioneering” ads will be redesigned so that users can identify them as such. (That’s a mockup below from Twitter of what ads might look like in the future.) 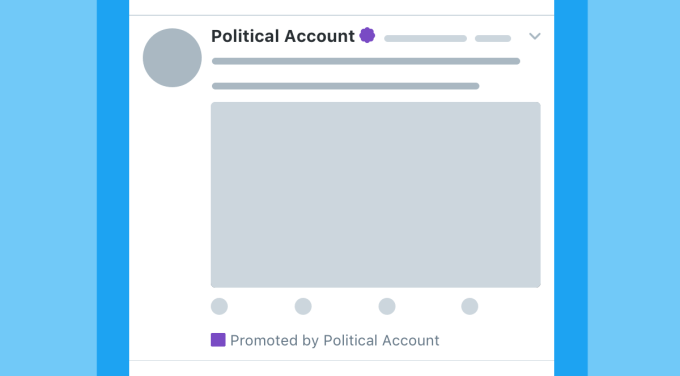 There will also be a special section in the transparency center focused on electioneering, where you can find out additional information like who’s being targeted by an ad, more information about the organization buying it and how much they’ve spent on advertising.

Not every political ad is explicitly endorsing a candidate. On the topic of “Issues-based ads,” Twitter writes that there’s “no clear industry definition,” but it says, “We will work with our peer companies, other industry leaders, policy makers, and ad partners to clearly define them quickly and integrate them into the new approach mentioned above.”

Twitter says these transparency efforts will go live in the United States first, but the plan is to make the information available globally. The company’s blog post also discusses that Congressional bill:

Last week, Senators Mark Warner (D-VA), Amy Klobuchar (D-MN) and John McCain (R-AZ) and Representatives Derek Kilmer (D-WA), and Mike Coffman (R-CO) introduced the Honest Ads Act legislation. We thank these members and others for their foresight in drawing attention to these issues as well as Chairman Hurd (R-TX) for holding a public hearing today on political advertising laws and regulations to facilitate a thoughtful discussion on disclosure policy. We look forward to engaging with Members of Congress and other key stakeholders on these issues as the legislative process continues.

Facebook has also said that it will increase transparency around advertising by allowing anyone to see any ad run by any organization on the social network.