Amazon’s Kindle app isn’t the only mobile app from the company getting a makeover today. Amazon has also now quietly introduced a new version of its Appstore app for Android devices. The new store features a visual redesign and an increased focus on Amazon’s own virtual currency, Amazon Coins.

Introduced in 2013, the Amazon Coins platform represents a different means of encouraging consumers to pay for apps and in-app purchases. Instead of seeing a dollar amount associated with their purchase, app developers show the purchase amount as coins. This could take the sting out of spending cash, Amazon has believed.

To what extent that has paid off is a bit unclear.

Since then, Amazon has tried other programs meant to encourage users to download more apps — including giving them away for free. But that program, called Amazon Underground, shut down earlier this year. At the time, Amazon said that it had other ways for developers to make more money, including Amazon Coins, which is why it no longer needed Underground.

Now Coins has a prominent position in the new Appstore.

From the central tab labeled “Coins,” Appstore users can buy Coins in various packages. The idea is that the more Coins you purchase, the more you’ll save on the purchase amount. For example, 100 Amazon Coins are worth $1.00, but when you buy them in larger bundles, they cost less. With the highest package, customers can save up to 22 percent on their Coin purchases. 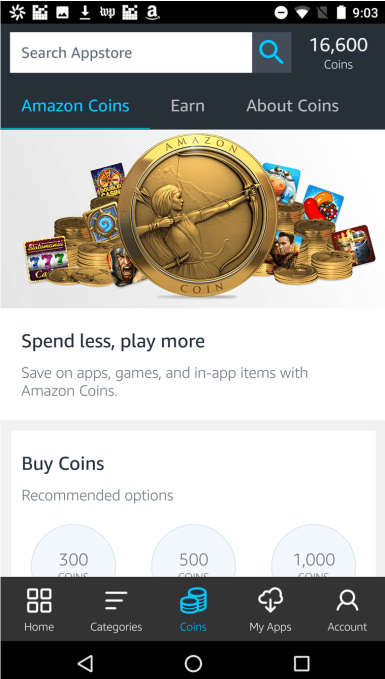 However, developers still receive their 70 percent royalty, even when the customer buys their app or in-app purchase using Coins. That means Amazon is eating the discount.

In addition, Coins are used by app developers as a way to encourage users to try their apps or stay engaged. In these cases, Amazon gives them away for free as in-game rewards. The Coins tab will also showcase ways consumers can earn more Coins, giving developers increased exposure.

Beyond the new focus on Coins, the revamped Appstore also introduces a simpler, more streamlined interface with visual elements like bigger images promoting the apps, and horizontal navigation at the top for browsing personalized recommendations, games, top charts and more.

In addition to a tab for browsing apps by category, there’s also a new “My Apps” tab that lets customers manage the apps they’ve already downloaded, as well as install updates. 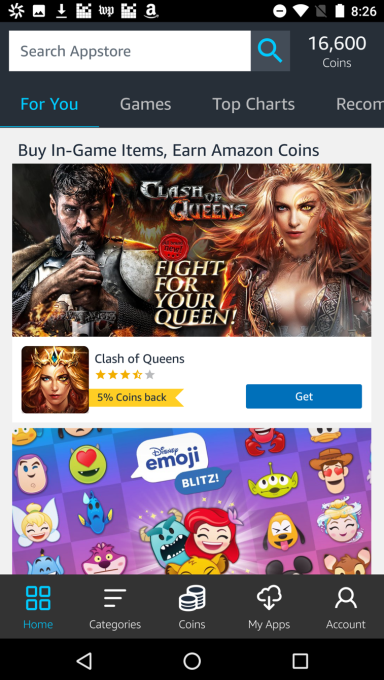 According to an announcement shared with developers, apps that are already being distributed to “all other Android devices” don’t need to be updated — they’ll immediately become available in the new Appstore. Otherwise, developers can toggle this on under their device support options in the developer portal.

Amazon’s revamp of its Appstore comes at a time when the two major app stores, Google Play and the iOS App Store, have just undergone makeovers of their own. In Google’s case, it recently introduced a selection of “instant apps” — apps that can be used without a download — alongside other features, like an improved Editor’s Choice section and new hub for games.

Meanwhile, Apple’s App Store makeover was more extensive, with increased use of editorial, separated top charts of games and apps and a whole new design.

Correction: 100 Amazon Coins are worth $1.00, not $100; this typo has been corrected. In addition, Amazon’s original blog post referred to the Appstore update as impacting a range of devices, including Fire TV and Fire tablets. After publication, it removed the references to Fire devices, and clarified this is only impacting Android devices.