Snapchat is embracing links beyond its native content and will now allow you to briefly disappear from its Snap Map. In an update to Snapchat’s iOS app today, Snap began rolling out two important new features. You now can share links from other apps via the iOS share sheet, allowing you to send a private message with the link to one or several people. And rather than just turning live location sharing on or off permanently, you now can opt to hide in “Ghost Mode” for 3 or 24 hours.

Snapchat also is making it easier to watch people’s Stories by letting you tap and hold on their name anywhere in the app. Android already had link sharing from other apps to Snapchat, and the company tells me Google Play-powered devices will get the Ghost Mode timer today or tomorrow.

External link sharing could make Snap into a legitimate source of referral traffic for news and e-commerce sites. That’s especially important to publishers as Facebook recently began testing burying all non-ad Page posts in a separate Explore Feed instead of the standard News Feed, reducing referral traffic by more than 50 percent to publishers where the test is running in five countries, including Serbia and Cambodia. 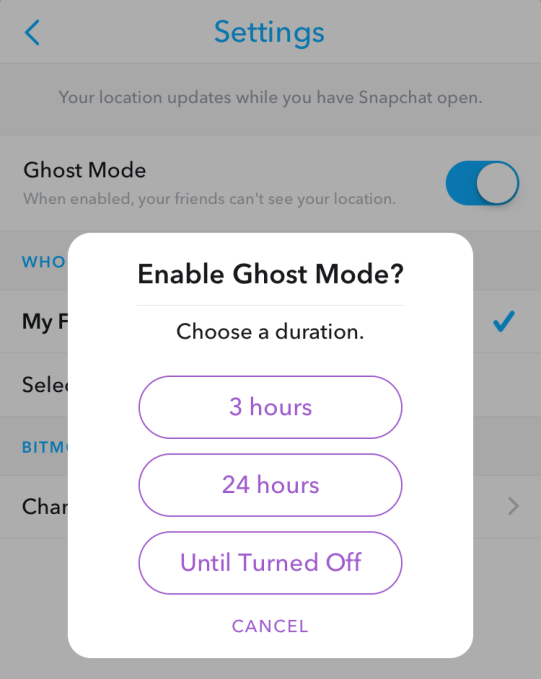 Brands and businesses seeking to go viral with teens could benefit from easier link sharing using the standard procedure instead of forcing users to copy and paste URLs. Snapchat recently began allowing links to be attached to private Snaps and Stories, spurring an unofficial developer platform that apps like Sarahah and Polly are piggybacking upon with anonymous messaging and polls.

Temporary Ghost Mode could make sure that if users want to turn off their location briefly, they don’t forget and leave it off permanently. This feature is crucial because Snapchat already hides Snap Map behind the camera, making it accessible with a pinch motion some users might not even know about. It’s easy to forget whether your location sharing is on or off. Now if they’re going somewhere sensitive like a secret party or a romantic partner’s place, they can drop into Ghost Mode and automatically reappear later.