Having just returned from an overseas vacation where I “partied with” a number of locals met spontaneously while out at concerts, bars and other events, I can’t quite wrap my head around the need for a dedicated app for travelers wanting to meet locals to hang out with — doesn’t this just happen naturally? But that, at least in part, is the premise behind today’s official launch of PartyWith, a revamped version of the app previously known as Party with a Local.

Founder Dan Fennessy notes the app has outgrown being only for travelers, but poking around in the app, that seems to still be a top use-case.

To be fair, PartyWith isn’t exactly carving out new territory in online networking — it’s part of a growing trend. (And perhaps I’m just showing my age when expressing a desire to meet people in real life instead of through apps, as is the millennial way.) 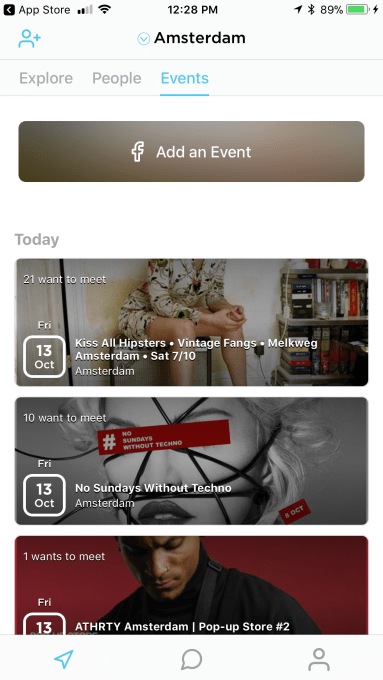 After all, a number of social networking companies are today exploring the idea that people are turning to mobile apps to make friends, not just find dates. Tinder attempted to expand beyond dating with Tinder Social, while Bumble launched a friend-finding feature Bumble BFF as well as professional networking option, BumbleBizz. Even Facebook is dabbling with helping strangers connect at events through its “Discover People” feature and other options.

Plus, several startups are attempting mobile friend-making, as well, like Shapr, Patook and HEY! Vina, for example.

PartyWith’s differentiator from these efforts is its focus on events — specifically, nightlife. Even if you aren’t quite sold on its social aspects, it could serve as a way to find out what’s happening in a city you’re visiting.

These events are added by the app’s users, as the startup doesn’t yet have formal relationships with event organizers. However, it has tested working with brands, including Budweiser, TimeOut, and Thrillist, among other alcohol brands, to help bring people to their sponsored events. 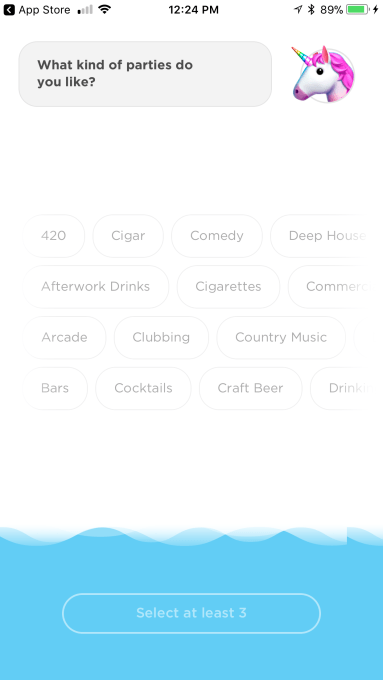 When you first launch the app, you’re asked what kind of parties you like (e.g. clubbing, comedy, arcade, cocktails, dive bars, festivals, live music — or you can pick music genres like punk or jazz, etc. — and much more).

You can then fill out your profile further and browse the upcoming events in your current city or elsewhere, post your own event, explore the profiles of other users and chat, or post a “party status.” The latter is basically a shout-out about what you’re up for. The app also offers some suggested statuses, like “Let’s go clubbing,” “Let’s go out as a group,” “What’s good tonight?,” “I need nightlife tips,” etc. 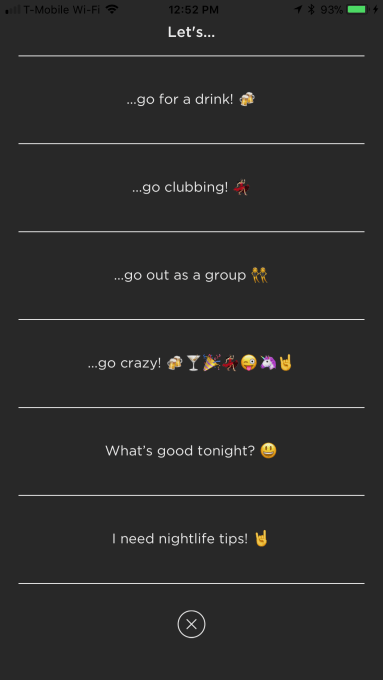 According to Fennessy, an Australian living in Amsterdam and former cartographer for Lonely Planet, the revamped version of PartyWith has made some changes in order to clarify that it’s not a dating app. It removed the gender filters, he noted, because that was encouraging some people to use the app in the wrong way. It’s not for dating or hookups, it’s for making friends.

A participant in Techstars Connection, which had its demo earlier this year, the app has grown to more than 170,000 users, Fennessy claims. It’s most popular in Amsterdam, New York and São Paulo at present, but is accessible worldwide.

Longer-term, the goal is to move PartyWith into other verticals, by connecting people who want to meet up for meals, drinks, playing or watching sports and more, Fennessy says.

A team of five from five continents, PartyWith has $430,000 in funding from Techstars, ZX Ventures, AB InBev, and other angels.

The new version of PartyWith is available as a free download on the App Store.