One night in Larry Guterman’s freshman year, he was at a loud party in a gym — and ended up with what he says was “ferocious” ringing in his ears afterward. But trip after trip to an audiologist, he said, came up without helpful results even though his hearing seemed to be headed south.

Then, one day, he said he picked up the iPhone and listened to the speakers. “I said wow, speakers are getting way better, why not just take the functionality of a hearing aid and stick it on the phone?” That today has turned into SonicCloud, a startup geared toward taking the same signal processing technology that’s improved over time in the mobile era and apply it to help people who are hard of hearing be able to take phone calls on their phones. The company said it has raised $4 million in financing from a batch of angels including Ian Hogarth, the co-founder of SongKick.

“The first time I met [Guterman] was over a phone call, and Larry was talking to me normally because he was [using a prototype for SonicCloud],” CEO Sachin Khanna said. “The next time I met him face to face in a quiet environment. I was amazed by how profound his hearing loss was. When I went and met the audiologist [with his audiogram] they gave me a look and said, ‘can this person talk on the phone.’ The majority of the audiologists within the first few seconds would say [Guterman] needed a cochlear implant. After [telling them we talked over the phone] they would do is give me a blank stare as if I were a lunatic.”

As you walk down the street in an urban environment, you’ll probably see a majority of the people wearing some kind of earbud — whether that’s something tethered to their phone, or a wireless earbud like the AirPod, or something in between. Right now Guterman hopes that they can tap into the hardware that those people are wearing to go after hearing loss and help improve their general quality of life. 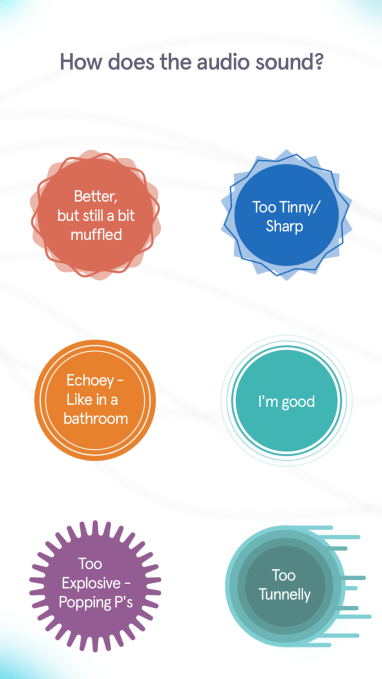 The goal is to boil down the introduction to the app — and figuring out a person’s specific hearing profile — to something much more approachable. When they start up the app, they’ll be asked a series of questions and to tune various sounds to zones where they can understand what the person is saying on the other end. That can be as simple as sliding up and down on a screen until a “Sh” or “Sph” sound becomes sharp enough to hear, even for someone with hearing issues.

Update: The timeline is a wee bit confusing since the technology is technically owned by Sonitum, but built originally by a company called SonicCloud. So here’s the rundown: SonicCloud spun up in 2012 by Guterman and co-founder Jon Lederman, who served as CTO of the company until August this year. The company filed for a patent in 2013 for the technology, and in 2014 the company was converted to a C-Corp, SonicCloud Inc. In 2015, Sonitum was formed and acquired the assets from SonicCloud (the company). That’s when Khanna joined as CEO of Sonitum, and the company raised financing.

By taking the approach through an app on a smartphone, the company hopes to pick off some of the basic problems that hearing-impaired people have — such as having trouble being able to understand what someone is saying over the phone during an interview. SonicCloud tries to tune its algorithms specifically to each person’s hearing patterns, and figure out at what specific ranges people are having trouble even if those ranges on the spectrum are very small. Right now, the service is also basically a fully operational online calling service.

“We built a voice calling service on steroids, we sometimes call it Skype on steroids,” Guterman said. “On top of that, we layered on a service that can process speech. When you’re interviewing for a job on the phone and you can’t understand the difference between yes and no — and forget about jury duty, even — there are so many things that are impacted and are at stake. The impact is often for people who withdraw and become isolated and not talk on the phone.” 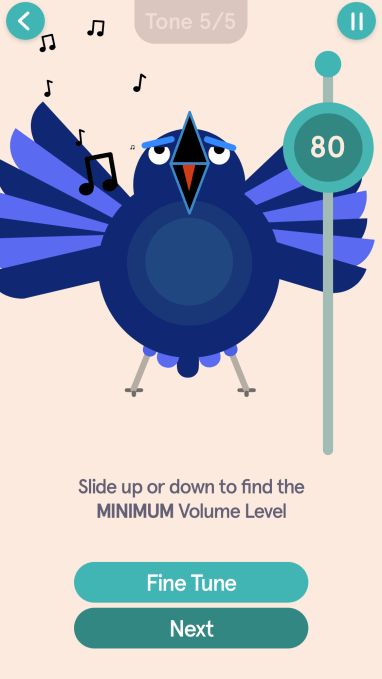 Khanna and Guterman started working on SonicCloud shortly after raising a seed round at the end of 2015. Since then, advances in technology on the actual device — whether that’s the new A11 Bionic chip in the iPhone 8 and iPhone X or the incremental changes since then — have offered new opportunities to do the kinds of calculations necessary to produce a proper signal for people hard of hearing. For now, the operations are done in the cloud, but it doesn’t seem like a stretch to see some technology like this happening closer to the device as power improves over time.

There are still a lot of attempts at different ways to approach the problem of hearing impairment. Apple is working with Australian-based Cochlear to bring one of the first hearing aids made for the iPhone. It still remains to be seen if this is a problem that can be solved at the technical level, but for now, Guterman hopes that they’ll find a way to figure out a replacement for hearing aids that can cost tens of thousands of dollars.

Update: We’ve included some additional information about the timing of the launch for the company and the product.