ARKit, Apple’s augmented reality framework that CEO Tim Cook recently likened to being as “dramatic” a development as the App Store itself, has now been installed more than 3 million times worldwide through a host of ARKit-powered apps and games, according to a new report out today from Sensor Tower.

The app store intelligence firm also examined the most popular ARKit apps, and found that games are currently dominating, in terms of both which apps are available featuring the new technology, as well as what people are downloading.

What makes ARKit compelling, Cook this week explained in a wide-ranging interview with The Independent, is that it allows developers to focus on their passions, while Apple handles the technical hurdles of implementing AR in the mobile apps.

“The way that you get lots of great ideas is for us to do the heavy lifting of the complexity of locational things and software, and put those in the operating system,” Cook had said.

Initially, however, what consumers are responding to the most are AR-powered games, Sensor Tower found. That’s not too surprising — after all, Pokémon GO is what really brought AR into the mainstream with its AR game for capturing Pokémon out in the real world. 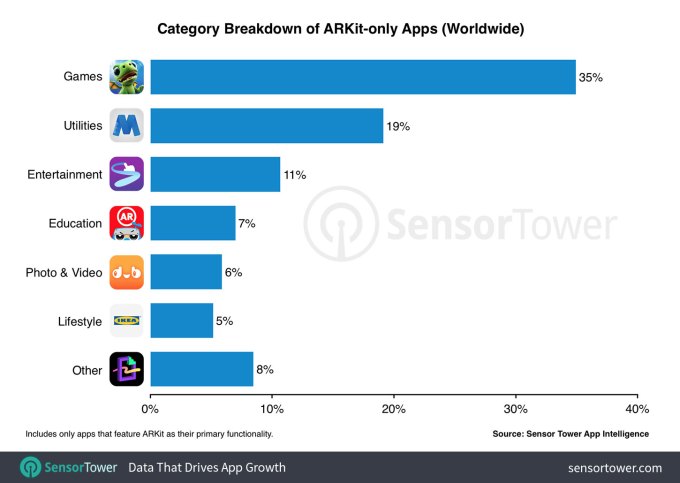 ARKit-powered games are also seeing a lot of traction, in terms of downloads and revenue, Sensor Tower found. In fact, mobile games accounted for 53 percent of ARKit-only app downloads and 62 percent of revenues so far.

Many of the AR games are “a mix of AR-driven takes on traditional game mechanics,” noted Sensor Tower, like strategy or puzzle games.

When looking at the number of estimated installed and revenue, apps like “AR Dragon,” “Zombie Gunship Revenant” and “AR Sports Basketball” were the top three free ARKit apps. Of those, “AR Dragon” from the Australian developers at PlaySide Studios accounted for more than 20 percent of the top free ARKit-only app downloads.

The top 10 paid ARKit apps were also largely games, and games held most of the positions on the top grossing chart, too.

A paid AR measuring tool, TapMeasure from the 3D-sensing company Occipital earned the No. 1 spot on the top Paid ARKit app chart.

Though games were prevalent on the top charts, there were some exceptions that showed ARKit’s non-game potential, including the interior design app Homecraft (a Lifestyle app, ranked as the No. 10 free app); the AR measuring utility AR MeasureKit (No. 5 free); and the Entertainment app Paint Space AR (No. 9 free).

When games are removed from the equation, the most popular ARKit apps seem to be those focused on using AR within 3D spaces in the real world — like the No. 4 top free ARKit app, IKEA Place, which soars to No. 1 when games aren’t in the picture.

The makeup of the ARKit landscape may change over time as developers experiment with what works — and what sells, of course.

Apple’s advantage in AR is that it works with iPhone, which has a less fragmented ecosystem than Android, as it controls both the hardware and software for all its devices.

“…having [ARKit] on iPhone changes the game for developers, because instantly they had hundreds of millions of potential customers,” Cook told The Independent. “If it were on a different device then you would never have a commercial opportunity, and without the commercial opportunity you’d never have 15 million people that say, ‘I want to design my passion with AR,’ ” he said.