After raising upwards of $100,000 via a Kickstarter campaign earlier this year, the team at Iconfactory has brought back one of the more popular third-party Twitter clients, Twitterrific for Mac. Effectively abandoned years ago when Iconfactory shifted its focus to mobile, the Kickstarter was meant to establish demand for a Mac app ahead of devoting developer resources to building it.

Today, Twitterrific 5 for Mac has gone live, and includes a number of features like a dark mode, themes, support for multiple timelines and accounts, syncing with its iOS counterpart, customizable fonts and type sizes, and more.

The client has also been built with macOS integrations in mind, including support for Notification Center, Retina displays, built-in sharing, full screen mode, and other features.

Longtime Twitter users will remember there was once a time when the landscape was rife with third-party Twitter clients, including Twitterrific, Tweetbot, and many more. But shortly after Twitter snapped up Tweetie in 2010 to form the basis of its own mobile app, it overhauled its API Terms of Service in 2011, effectively telling developers to stop building their own third-party Twitter apps.

Twitter then picked up TweetDeck for $40 million to save it from being acquired by UberMedia. But the app hasn’t received as much attention in recent months, as Twitter is focused more on mobile and web than it is on desktop.

The Twitterrific Mac app was first released a decade ago, but stopped being updated in 2013 as the team followed the money to mobile.

There’s still a small, but devoted crowd interested in a Twitterrific Mac app, however, as the Kickstarter proved.

But at double the price of a rival third-party client for Mac, Tweetbot, Iconfactory has priced its software to appeal to a niche audience whose fondness for Twitterrific hadn’t faded over the years. (Its new app is $19.99 compared with just $9.99 for Tweetbot.) 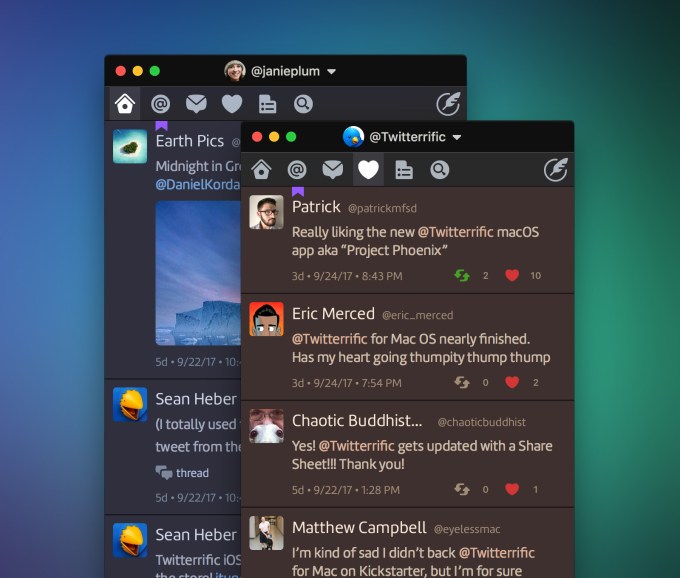 That said, the app delivers a good handful of features Mac users will like, beyond standard items like support for multiple panes, and access to Twitter’s main features like mentions, DMs, favorites, retweets, quote tweets, trending topics, saved searches, lists, and more.

It also makes it easier to follow chained tweets and “tweet storms,” while adding in-demand features Twitter itself doesn’t have, like the ability to edit your tweets, for example. (To be clear, Twitter doesn’t allow for tweet editing natively, so Twitterrific’s implementation is a workaround – it deletes the tweet you need to correct with the new one you’ve edited. Still, it’s handy.)

Different types of tweets are color-coded in Twitterrific as well, allowing you to quickly differentiate regular tweets from replies, DMs and your own updates.  And the app is quite customizable, too, with support for things like light and dark themes, the ability to control font type and size, which windows you want to see, and what content you don’t.

For those with the Twitterrific iOS version, the app will sync your reading position between devices, plus your mutes and muffles, a lighter version of muting.

The app also promises an ad-free experience without other clutter like Twitter’s “While You Were Away” catch-ups or other people’s tweets in the timeline. (Twitter doesn’t currently serve ads through its API, so third-party apps like Twitterrific don’t show them. But that could change.)

Kickstarter backers received the new Twitterrific for Mac app at a discounted price, and in some cases, were able to beta test. The public release at $19.99 may be a tougher sell among other mainstream Mac users, however, given the competition from both Tweetbot and the free Tweetdeck app.