“So much of it is stranger than fiction. It’s a great story, I knew that if I didn’t write the book, someone else would and I’d regret it,” says Billy Gallagher, author of “How to Turn Down a Billion Dollars: The Snapchat Story.” The book, which starts pre-sales today and debuts on February 13th, follows CEO Evan Spiegel from the Stanford dorms where Snap was invented, to rejecting Facebook’s acquisition offer in 2013, through Snap’s rocky IPO.

Gallagher is uniquely apt to pen the book. The former TechCrunch reporter and Khosla Ventures analyst was just two years younger and in the same Stanford fraternity as Spiegel [Disclosure: so was I]. He already knew many of the young CEO’s contemporaries and was privy to the back-channel gossip about how the idea for disappearing messages came to Spiegel, as well as why co-founder Reggie Brown was pushed out of the company.

Gallagher’s first-ever story for TechCrunch in May 2012 helped set the record straight that, “No, Snapchat Isn’t About Sexting.” Now completing his Stanford Graduate School of Business degree, Gallagher has both the life experience and the know-how to decode the most fascinating startup founding story of the decade. Even without much assistance from the company itself. 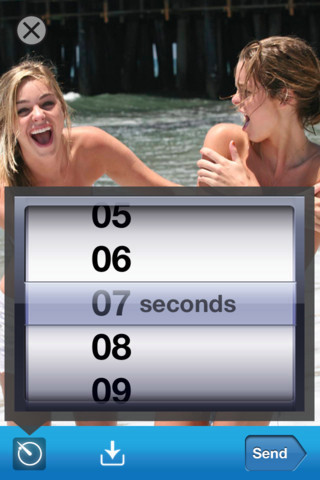 One of Snapchat’s first PR images, setting a racy tone from the start

“I was given no official access,” Gallagher tells me. “Snapchat’s PR helped me with fact checking. I had to rely on previous sources I had from TechCrunch. I was pounding the pavement, cold-calling and cold-emailing. ‘What files can you show me? What emails can you show me?’ ” Gallagher worked from more than 200 interviews and 450 pages of source notes to compile the end result.

But the hardest part was adjusting from the rapid-fire publishing style of TechCrunch to the long feedback cycle of publishing with St. Martin’s Press. “You find something out, you get really excited, you find a second source, and then you post about it,” Gallagher says of blogging. But with the book, he’s had to watch scoops he first sniffed out get exposed later by the blogs.

Gallagher wouldn’t share hints about any of the scoops he has left for the book’s launch in February, but says what he thinks readers will enjoy is “Some of the early days of the company and even stuff at Future Freshman [which pivoted into Snap]. There’s meat left on the bone there.” Plus there’s all the details of the rejected Facebook acquisition. While The New York Times’ Evelyn Rusli diligently reported on Spiegel turning down Facebook’s $3 billion-plus bid in 2013, Gallagher’s book will reveal the inside movements that characterize the failed deal.

As for his concluding perspective of Spiegel forged through the writing process, “You have to be impressed with anyone who can take an idea that was arguably not that great of an idea at its start, turn it into something very smart and simple, and build it into what Snapchat is today,” Gallagher explains. “I admire the guts to turn down Mark Zuckerberg and Facebook at such a young age, and then back it up by taking the company public.” 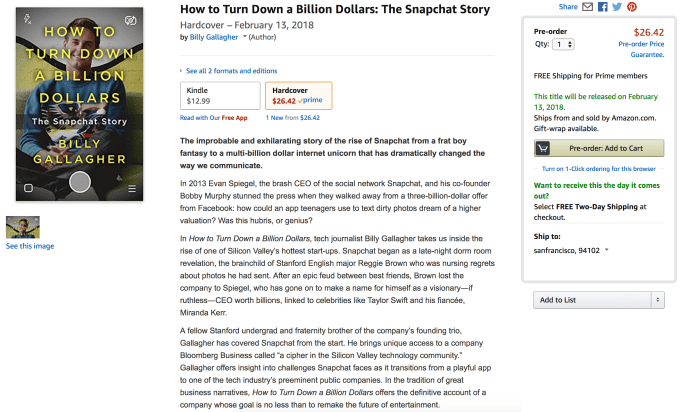 Yet don’t expect some cheery, one-sided profile of the product genius. “Evan has some weaknesses. For founder-CEOs that are the company, it can be really hard when what’s getting you from zero to 1, and trusting your gut, isn’t what gets the company from 1 to 100.”

And in regards to Facebook’s strategy of copying Snapchat that’s making it so hard for the younger company, Gallagher gave these foreboding words: “It’s a little disheartening to see how Facebook just looks at companies and says, ‘You’re Houseparty. You’re doing this really cool innovative chat app. We’re going to either buy you or crush you, and crush you by copying you with all the advantages of our scale,’ ” he says glumly. “It’s hard to do anything in the social space without getting crushed by Facebook. What happens in five to ten years if this cycle continues?”

“How to Turn Down a Billion Dollars: The Snapchat Story” is now available for pre-sale from Amazon via St. Martin’s Press