Taking care of a cut or scrape usually means swapping out the bandage a few times, and maybe putting a little healing cream or hydrogel on there. But what if the dressing could dispense that stuff on its own? That’s the idea behind a smart bandage now being tested by engineers from the University of Nebraska-Lincoln, Harvard and MIT.

Instead of plain sterile cotton or other fibers, this dressing is made of “composite fibers with a core electrical heater covered by a layer of hydrogel containing thermoresponsive drug carriers,” which really says it all. 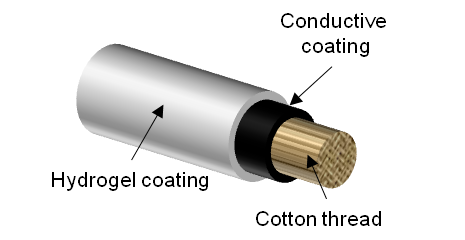 It acts as a regular bandage, protecting the injury from exposure and so on, but attached to it is a stamp-sized microcontroller. When prompted by an app (or an onboard timer, or conceivably sensors woven into the bandage), the microcontroller sends a voltage through certain of the fibers, warming them and activating the medications lying dormant in the hydrogel.

Those medications could be anything from topical anesthetics to antibiotics to more sophisticated things like growth hormones that accelerate healing. More voltage, more medication — and each fiber can carry a different one.

“This is the first bandage that is capable of dose-dependent drug release,” said UN-L’s Ali Tamayol in a news release. “You can release multiple drugs with different release profiles. That’s a big advantage in comparison with other systems.”

In a paper published in the journal Advanced Functional Materials, the team documents how in tests, critters (not humans — those tests come later) healed better when given the active bandage. They also made sure that the heat didn’t affect the healing process or the medication.

For ordinary scrapes a normal bandage (or plaster, for our friends across the pond) is probably still more than sufficient — this is for people whose healing processes are inhibited, or for whom frequent dressing changes are impossible or inconvenient.

Next up, in addition to further testing to satisfy the FDA, is investigating how to integrate sensors with the fibers, to measure blood glucose levels, pH and other indicators of how the healing process is going. Maybe soon your bandage will even include a progress bar.