Samsung announced the Odyssey today, its inside-out tracked VR headset which will run on the Windows 10 platform. It’s the company’s first headset that operates with a PC powering it rather than a smartphone, and first impressions indicate that the company did a pretty stellar job.

I had a few minutes to play around with the Odyssey today at Microsoft’s mixed reality event, and what’s clear is that the headset delivers an experience that is pretty indistinguishable from the top competitors like Oculus and HTC on a similarly specced PC.

The headset is the most expensive Windows 10 option currently, at $499, while Acer’s headset is the cheapest with its bundle retailing for $399. It’s nice that Microsoft has some varying price levels, but it’s hard to think of reasons to recommend buying the lower-specced headsets when Samsung’s options show off far more than a $100 jump in quality. 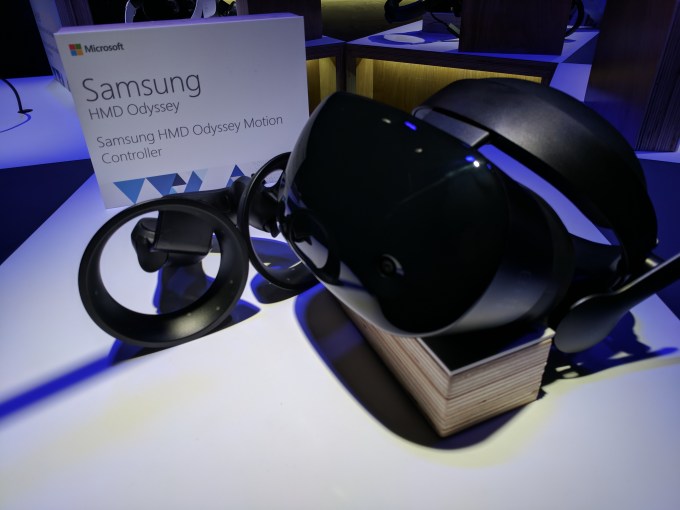 The star of the headset is definitely the display quality, which forgoes the lower-quality LCD screens that all the other announced headsets are using, in favor of AMOLED, which will allow for a more responsive experience that should reduce discomfort. The Odyssey is also a jump in resolution from the other headsets’ 1440×1440 per eye displays to a wider 1440×1600 per eye setup.

None of this matters much if you’re running on integrated graphics, which Microsoft gives as an option, but I haven’t found to be the most pleasant experience. If you have a machine with decent discrete graphics, you’re going to have a noticeably smoother experience with Odyssey over the headsets from the other OEMs.

While I’m still partial to the build quality on the Oculus Rift and HTC Vive over the Odyssey, Samsung has built a headset that feels very substantial and offers a few sorely lacking features from what other OEMs have shown off.

The integrated AKG headphones, all prepped and ready for 360-degree spatial sound, are pretty nice, but the biggest thing is that they’re just there and are one less thing you’ll have to fiddle around with before diving into an experience.

We’ve talked at length about the setup process and the quality of the motion-tracked controllers for Windows 10, but Samsung’s headset really makes up for most of the gripes I had about the previous setups.