Identify the traits of your top performing employees and hire people like them, but without the discrimanatory bias of traditional recruiting. That’s the promise of Pymetrics, an artificial intelligence startup that today announced $8 million in new funding onstage at TechCrunch Disrupt SF. Pymetrics’ goal is “making the world a fairer place” by dismantling hiring discrimination like sexism, racism, ageism and classism.

Anyone can play the Pymetrics test games and get scored on different hireable traits, plus see suggestions for job types they’d be great at. You can watch my interview with Pymetrics’ CEO Frida Polli below:

Here’s how it works. A company’s all-star employees play Pymetrics’ set of games that assess things like memory, emotion detection, risk-taking, fairness and focus. Pymetrics determines which traits equate to high performance for specific roles in the company.

Then recruiting candidates take the same test, which is scored by AI instead of humans so a person’s name, gender, skin, color, age or resume aren’t factored in. Finally, Pymetrics recommends companies hire people who are similar on the inside to their best workers, but not necessarily on the outside. 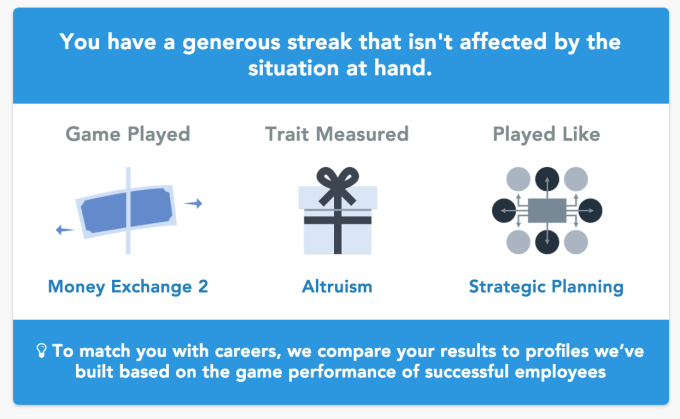 The result is a hiring process that doesn’t preference white guys from elite schools who were on the sailing team just like the recruiter. Instead, it finds the best people for the job, regardless of their backgrounds. That leads companies to find amazing talent that’s been overlooked because of what they look like, or because they went to community college or haven’t worked at popular companies.

“The resume is the most biased piece of information used in the hiring process,” says Polli. The average resume gets scanned for six seconds, and mostly just surfaces name-brand experience that looks good on paper rather than what makes someone good at a job. “Google did the famous study of resumes and performance test scores, and found an extremely small correlation,” Polli tells TechCrunch.

Pymetrics’ insights can make companies better at hiring at a time when it’s becoming clear that talent is the big differentiator between success and failure. That’s why JAZZ Venture Partners led the $8 million round, and its partner Zach Lynch will join the startup’s board. The round also includes return support from Khosla Ventures, Randstad Innovation Fund and BBG Ventures. Pymetrics also received a grant from The Rockefeller Foundation that will fund access to the software for companies that use it to hire high-potential at-risk youth.

Bringing Pymetrics to $17 million in total funding, the new capital will go toward expanding Pymetrics’ London and Singapore sales office as the company seeks to sign more international clients. It’s already working with 50 enterprise clients, including huge companies like Accenture as well as Unilever, which recently put 250,000 of its employees through the Pymetrics test games. Polli says the company drastically increased the quality of candidates it brought in for interviews, becoming 100 percent more likely to hire them. It also hired new types of people, like one who’d never been on a plane before. 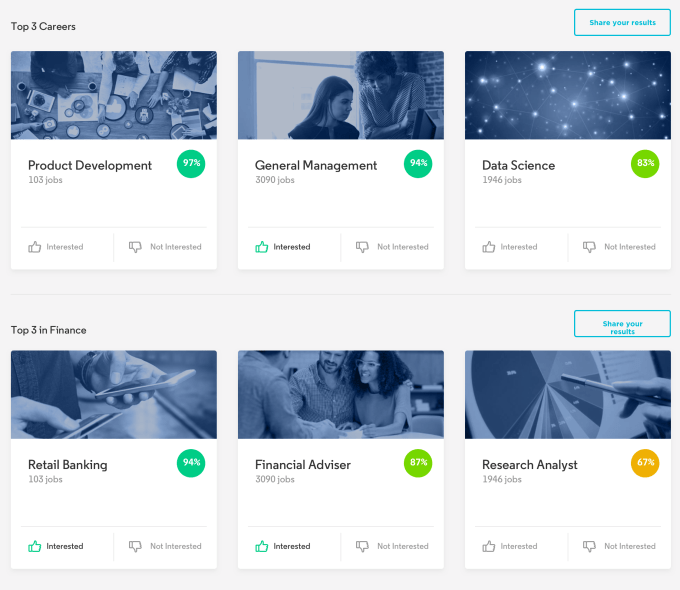 But Polli stresses that the goal isn’t to replace recruiters with AI, or make companies more efficient so they can lay off employees. Instead, its goal is to let employers reassign their recruiters from haphazard resume-scanning to outreach so they improve their candidate pool. Similarly, instead of eliminating jobs with fewer more-skilled employees, Pymetrics believes employers can get staff working on harder problems to boost the business’ top line.

The challenge will be getting recruiters to adopt this bold new model of hiring, and overcoming their fears of being made obsolete.

I tried Pymetrics’ battery of games and not only were they fun, but they made me assess what traits I could improve in myself. It’s time we moved past using Ivy League degrees, past lucky breaks, and discriminatory pattern-matching to sort people into careers. We have the technology to understand people’s underlying skills. With AI that doesn’t see race or sex or expensive suits, merit can shine through.