The buzziest buzz in certain corners of the entrepreneurial ecosystem these days, ICOs were the talk of the town at TechCrunch Disrupt SF 2017.

Comparing the ICO market to the recent dot-com bubble, Dan Morehead of Pantera Capital compared the froth in the market these days to the days of the dot-com bubble in the late 1990s.

“Everyone always uses the dot-com analogue. I think it’s a good one, but in this case, back then you actually had the sock puppet and you could tell if the sock puppet could do pet food delivery online,” Morehead told moderator and TechCrunch reporter Jon Russell.

“Here it’s just a whitepaper and a few developers. It’s so far from what the IPO boom was in the ’90s. It does take a lot of in-depth thinking and reading. Back then they talked about valuations based on eyeballs.”

Morehead said that it takes more thinking and reading, but in a sense, there’s even less of a methodology to determining success.

“The first project to go live would be Augur, and it’s not live yet,” Morehead said. “All the rest are just evaluating the likelihood of success.”

For Morehead, that’s a sign of the value a venture (or investment) firm like his can bring to the market.

“There’s a Cambrian explosion happening. There were 65 ICOs in one week. There is an argument that a fund like ours could do some diligence and read all the whitepapers and add some value,” he said.

“In 20 years that’s probably not true, it’ll be really transparent, and a fund like ours probably won’t need to exist.”

That transparency may come from a shakeout in the market. Morehead said that there are probably a single-digit number of cryptocurrencies that will be successful. On top of those currencies, however, will be any number of companies that use the tokens to build their own products and services.

In the interim, funds like Morehead’s sound more like a monastery or a library than a venture capital firm. “Five of us are reading whitepapers all day and meeting developers,” he said. “There’s just so much happening right now.”

For his part, one of the chief architects of the current blockchain boom — Ethereum creator Vitalik Buterin — is much less interested in the cryptocurrencies his token has wrought.

I'm actually sad that the main "blockchain panel" at #tcdisrupt is about ICOs. They are legitimate but currently quite overemphasized

For Buterin, the value is less in the coin offering and the value they create than in the improving the value and decreasing the transaction fees on Ethereum itself.

That said, howling at wind is useless. I think if we can improve scalability and cut txfees 10-500x the non-financial apps will shine more.

Morehead agrees that not all tokens are ultimately necessary. “I think there are a lot of projects where they are saying ‘Hey. It’s kind of hard to raise money in the venture world, why don’t I just do an ICO?’ ” he said.

“Maybe there the token isn’t ultimately necessary, and someone will just fork it and replace it with a cheaper product,” Morehead added. 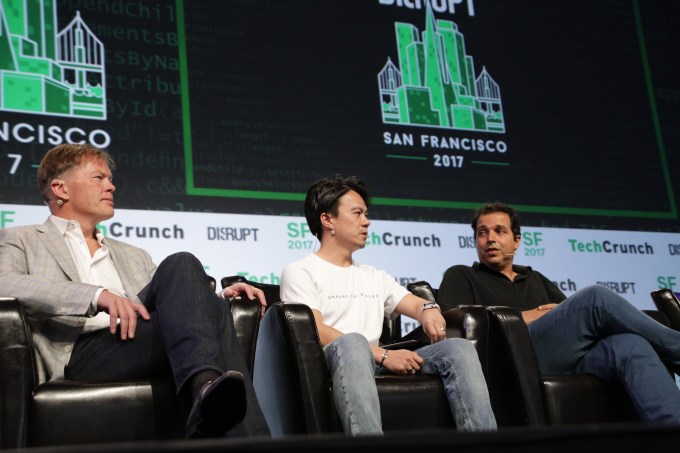