Spotify has quietly launched its own iMessage application that let you text songs to friends with just a few taps. The new app hasn’t been officially announced, but appears to be similar in functionality to Spotify’s Messenger app, which went live earlier this spring as one of Messenger’s new chat extensions.

As with the Messenger bot, the new iMessage app also lets you quickly search across Spotify’s full catalog for a track you want to share, then tap a button to paste a preview of that song into your chat session. This preview includes an album image, song title, and artist information.

But in the iMessage app’s case, the image is much larger than on Messenger, and there’s no “play” button. Instead, a small Spotify logo at the top left is what indicates that what you’ve sent is a song. 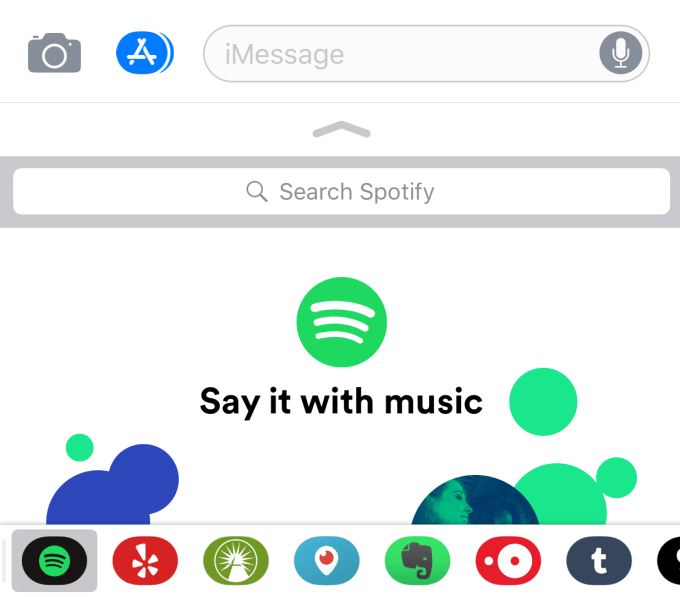 The recipient then taps the image which launches a new window, overlaid on top of the chat session. From here they can play the provided 30-second clip, or tap the “Play on Spotify” button below to hear the full track, if you’re a subscriber. (We also noticed that once it knows you’re a paying Spotify user, the option to stream a clip goes away and you’re just directed to the Spotify app to stream.) 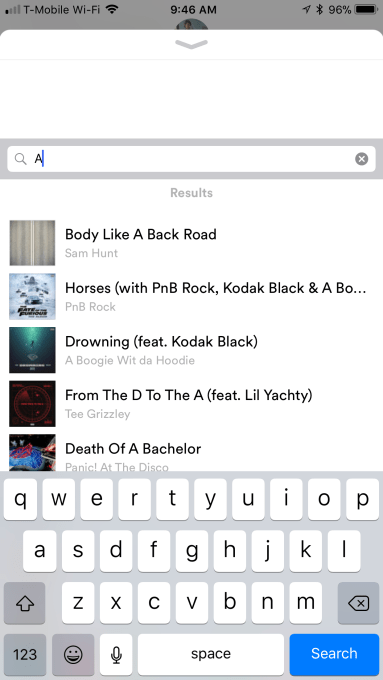 Above: Spotify’s iMessage app begins suggesting songs as you type

The iMessage extension itself rolled out in Spotify’s latest iOS app update this week, and was then spotted by iGeneration, MacRumors, and others.

As reports have noted, a key difference between Spotify’s iMessage app and Apple Music’s is that the latter allows you to listen to the full track right in iMessage. However, Apple’s is more limited because it only pulls up tracks that are in your ‘recently listened’ list. 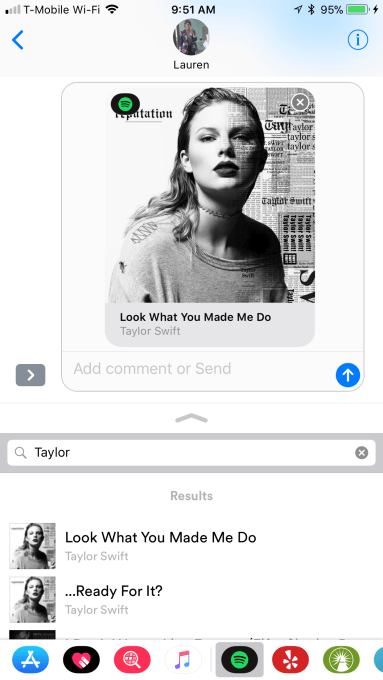 If you have Spotify’s iOS app already installed, you can switch on the new Spotify iMessage app from the iMessage App Store (unless you have your Settings configured to automatically enable all new iMessage apps by default, in which case you can just start using the app).

On iOS 11, that means heading to the end of the horizontal row of iMessage apps that appear when you tap the App Store button next to the text entry box in iMessage, then tapping the “More” button. This launches a window where you can manage which apps are switched on. (Just tap the “Edit” button to display their toggle switches).

Though the functionality on iMessage is limited to just sharing tracks – not finding hot or trending music or building group playlists, for example – that may actually be a smart design choice on Spotify’s part.

One thing some iMessage apps have done wrong is require too many steps to use. When you’re in the middle of a back-and-forth conversation, you don’t want to disappear from the chat for too long while you fiddle with apps. By simplifying the process to just three steps – search, tap, and share – it’s a lot quicker to send a Spotify clip now, rather than hunting down the URL of the track instead.

Spotify’s Messenger app has also seemingly pared down since launch, we should note. Originally it also highlighted popular tracks and made various recommendations, but now it just lets you search, pull from recent songs, or create playlists.

Spotify confirmed the launch of the new iMessage app to TechCrunch in a statement.