Hopper, the intelligent travel app that has made finding affordable flights a lot easier, is today rolling out a new feature called Flex Watch, which will send you recommendations about flight deals in a highly personalized manner.

Today, most travel booking services only let you adjust your arrival or departure dates by a few days – for example, Kayak lets you search up to three days before or after the travel dates you had in mind, and can recommend savings by allowing you to compare nearby airport prices.

Hopper Flex Watch, on the other hand, goes much further.

The feature lets you specify a month or range of months you’d like to travel, as well as enter in other factors like the ideal length of your trip.

What’s more, you don’t even have to have a specific city in mind that you want to fly to. While you can enter a city as your destination, you can also set a Flex Watch for states, countries, geographic regions, or continents.

You can even set a Flex Watch for “anywhere” – the idea being that you’re available to travel, but are open to being inspired when a destination has a great deal. 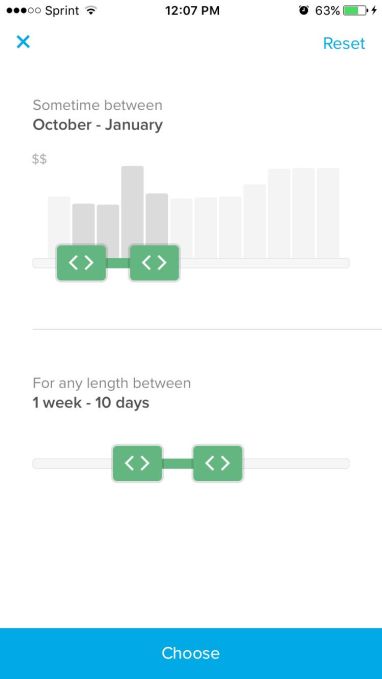 Keep in mind though that when you’re looking for rock bottom cheap deals, there’s going to be a reason prices are slashed. Perhaps the destinations themselves may not be as popular, or it’s not a great time of the year to visit, among other reasons. Flex Watch may work better when you have at least a vague idea of where or when you want to go.

The feature largely aims to help travelers who are price-sensitive, but get overwhelmed by the offers that arrive in email newsletters, like Scott’s Cheap Flights,  or those found on other deal-finding sites. In many of those cases, snagging a low-priced flight means keeping up with the incoming deals as they arrive, and then being ready to pounce as soon as one’s available. For example, some of Scott’s deals are “mistake fares,” or those that arise from other cracks in the airline booking systems.

Flex Watch, meanwhile, can be a more passive experience.

After you’ve configured your preferences – as general or specific as they may be – you can then swipe up on the destination to see the current deals and information about which months are cheapest to fly. You can also swipe left or right to see suggestions and other data-driven advice about which destinations are cheapest, and which Hopper thinks will drop in price in the future, the company explains.

This is all laid out in a clear interface that’s easy to understand. (I’ve personally always appreciated Hopper’s clean design for making something like booking airfare seem more straightforward, and Flex Watch continues that trend.) 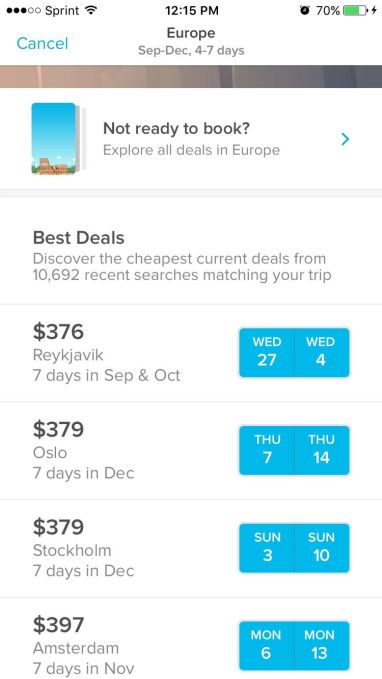 But you don’t have to immediately dive in, if the trip is something you’re thinking about for the future. Instead, you can just wait for Hopper to ping you when it spots a deep discount on a fare to your destination.

The feature, like others that Hopper has developed, relies on data it collects by continually analyzing ever-changing flight prices across airlines, then translating that into actionable data. The company says it’s now monitoring 10 to 15 billion flight prices per day.

To make Flex Watch work, it also has to compare its travel data to a user’s own personal preferences. This is then compared with what other similar Hopper users are watching and discovering. The algorithm will also get smarter on its own as it learns your likes and dislikes, the company says. You can thumbs-down a recommendation you don’t like to better train it, for instance.

The development of Flex Watch follows Hopper’s late last year raise of a sizable $61 million round of additional funding, which came at a time when Hopper said it was selling $1 million in flights per day, and users had tracked some 18 million trips using its app.

Today, Hopper says it’s selling $1.5 million in flights per day in its app, users are watching 3 million trips per month, and it has seen 29 million trips watched to date. (The company declined to speak in more detail about revenue or profitability).

Hopper’s app has also grown to over 17 million installs, per App Annie data, compared with the 10 million-plus announced in December.

That growth is due to Hopper’s continual release of features like this – all the things you wish a travel app would do for you, like explaining those confusing airline fees associated with the new class of “basic” fares, for example, or telling you how to tweak your dates or airports to save more money.

Flex Watch is rolling out now to iOS now and will come to Android in the near future, the company says. You may not see the feature yourself right away, we’re told, because the rollout is staged while the backend is being scaled up. But it should arrive soon.