The tech industry is about to get its largest clue as to just how mainstream ICOs can become.

Most of the estimated $1.7 billion that has been raised this year from ICOs (initial coin offering), also known as token sales, has been from companies or projects built around the blockchain technology that powers crypto coins like Ethereum and bitcoin. Most of those token sales have centered around ambitious products that are not yet assembled but will be developed using the proceeds. The companies behind the ICOs themselves are, for the most part, fairly new, and certainly far less mature than the average IPO candidate.

In short, ICOs have barely touched mainstream tech companies yet.

But that all changes this week as Kik begins selling its Kin token in an ICO targeted at raising $125 million that runs from Tuesday until Wednesday. The sale bucks those ICO trends, and it could prove to be a seminal event for the tech industry at large.

Beyond the maturity of the company and popularity of its product, Kik’s ICO is a huge test of whether crypto coins and blockchain technology can be implemented within an existing, mainstream consumer internet business.

While much attention is given to the capital-raising side of ICOs, the implementation component of a token sale is critical and typically under-reported. That’s perhaps to be expected, given that the flow of capital has taken center stage as the industry has mused on the potential to raise vast sums of capital without the need for venture capitalists.

But there’s a lot more beyond the money; namely, how an ICO company plans to utilize their token within its business. That’s the crucial part to selling a token. Tokens are not equity. They are more like the oil that greases the machine, or a key that unlocks and powers a decentralized network on the blockchain.

For example, Omise Go (OMG token) plans to create a decentralized payment system in which its tokens validate transactions. Qtum (QTUM token) is creating a platform for developers to utilize blockchain tech. And FileCoin, which recently held a record $257 million ICO, is developing a decentralized storage network using the blockchain.

Kik’s approach is evolutionary. It will use its token to create a developer ecosystem for its messaging app. Essentially, it is bolting onto its service a currency float for developments to give those who develop apps and bots for Kik a way to generate money without advertising or relying on users to buy things.

The company tested virtual points within its platform in 2014, and, happy with what it saw, it is now going to the next level with an ecosystem which, if all goes well, becomes self-sustaining. That’s to say that developers could earn Kin tokens based on metrics that reward user engagement — such as time-spent within their app or service — to help focus on building things people actually like and use.

Further down the line, Kik hopes other social platforms and apps may adopt Kin to monetize in a way that is more user-friendly.

It’s an ambitious vision, but one that could easily be modified for use by other companies that sit outside of the crypto space and are not typical ICO material.

“I got a lot of requests, people are very interested in what we’re doing,” Kik CEO Ted Livingston told TechCrunch in a recent interview.

“In consumer tech, we’re at a point where there are just a few big companies. The world needs a new way to compete with these monopolies [and] you’ll see lots of people going down this [ICO] route,” he added.

Livingston admitted that watching Snapchat struggle to show its value to Wall Street while Facebook — the monopoly whose name he didn’t mention — was cloning its product in its social network and Facebook-owned Instagram and WhatsApp services, helped push Kik toward an ICO option. As did the opportunity to make Kik an independent running business that would never need to be sold, or face the rigors of going public.

“When we looked at raising another round [of VC funding], we asked ourselves how do we answer the question about how we will become a profitable business and how we will compete with these monopolies,” Livingston said. “We didn’t have an answer we really believed.”

“Anything you do will be copied by these monopolies… everything we have come up with and launched first has been copied. Even Snapchat [which has raised billions of dollars and has sizable R&D resources] can’t compete.

“We went back to our board and said we could keep going down this losing route but we won’t win — these companies are bullying people around.”

Now Livingston hopes that Kik can find the financial stability it needs to build a platform that can thrive.

“The token sale is perfectly aligned with our users and developers. We can make a lot of money because we can hold 30 percent, and use a big chunk of the token pool to help developers help us compete,” he explained. 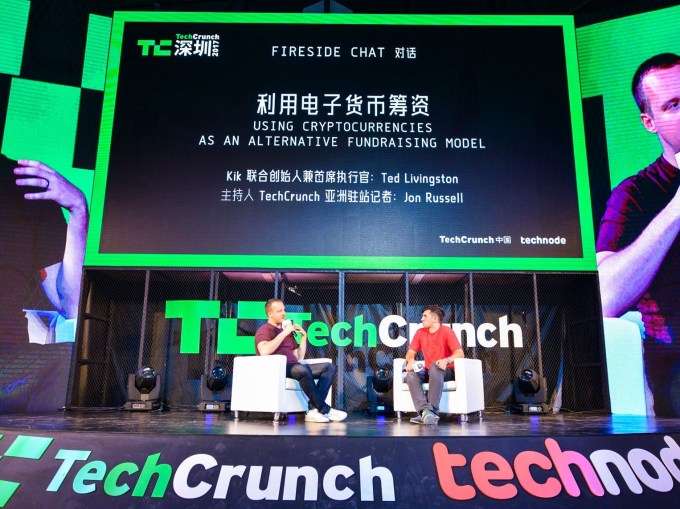 Kik’s token sale isn’t just unique for the application of the token, or the status of the company, though. The startup has also invested considerable resources on the legal side, particularly in light of the SEC’s concerns around whether certain tokens represent securities.

The sale is generally open to the U.S., unlike other ICOs, although those living in Washington and New York have been excluded due to local regulation concerns. China, where ICOs are currently banned, is also off the list, as is Canada, the country from which Kik hails.

“Despite setting up Kin to have one of the most fair TDEs [token sale] to date, and despite our best efforts to work with the OSC [Ontario Securities Commission], they have failed to give us clear direction on when Canadian securities law will or, more importantly, will not apply. Our Kin project needs to move forward, so to avoid risks arising from this uncertainty, we, a Canadian company, have decided to move forward without Canada,” Livingston wrote in a blog post published just a week before the token sale.

The OSC published in August a warning of links between ICOs and securities and, in a statement in Bloomberg, it claimed it had advised Kik that the Kin token sale would constitute an offering of securities.

Finer points aside, the omission deeply bothers the Kik CEO, who has been a champion of startups in Canada through donations to his alma mater: the University of Waterloo.

“It is the most upsetting thing we have encountered on our crypto journey so far,” he told TechCrunch following the decision. “We will see what it ends up costing Canadians.”

Despite those restrictions, Kik registered more than 17,000 prospective token sale buyers from 139 countries. They submitted basic identification to qualify for the white list that allows them to buy a portion of the $75 million Kin tokens available for public sale. These people have 24 hours to purchase a maximum of 15.20 ETH ($4,393) of Kin, a limit generated by dividing the total sale cap by the number of registered users.

Any unclaimed tokens from that day-long window will be sold to the white list in another round. The $75 million public sale is combined with an earlier $50 million token sale that was held for accredited investors, and included ICO-focused firm Pantera Capital.

You can be sure that the Kin token sale has drawn interest beyond those buyers and investor. Regardless of the outcome, it is sure to be a case study referenced by other tech companies in the future to analyze their own potential to embrace tokens and the blockchain. What we don’t know is what happens next.

Livingston is sure that, despite the increased noise around ICOs and the potential for scams, it will be transformative.

“Ninety-eight percent of these things will come to nothing,” he told TechCrunch. “But a few huge entities like Google and Amazon will come out of this era of technology.”