Facebook doesn’t want you to burn through your mobile data plan just to keep watching its videos. That’s why it’s testing a new feature called Instant Videos that downloads and caches Facebook videos to your phone while you’re on Wi-Fi so you can watch them later on the go for free. Users will see lightning bolt icons on pre-loaded videos.

The Instant Video feature is reminiscent of Instant Articles, Facebook’s hosted content format that loads much faster than mobile websites so users don’t drop off waiting for a publisher’s articles to appear. Because videos load even slower than web pages, publishers might be keen to get involved to ensure maximum viewability for their clips. 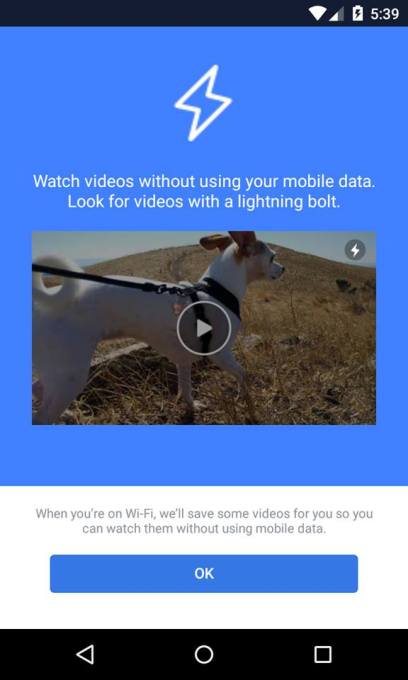 The feature could also benefit Facebook’s new Watch tab of original video content, allowing it to cache episodes so people could watch them on a train or elsewhere that they might not have a strong connection or want to use up their data plan watching longer-form videos.

Facebook confirms to TechCrunch that the Instant Video test is available to a small percentage of Android users. A screenshot of Instant Videos was first shared by “Devesh Logendran” using a pseudonym to TNW’s director of social media Matt Navarra. Now we’ve confirmed with Facebook that the goal is to remove data costs as a barrier to watching its videos.

Previously, Facebook has tried to adapt its service for differing bandwidth and data prices by re-ranking News Feed to prioritize low file-size content while downranking videos if you’re on a slow connection, or replaying stories you’d already seen.

While Instant Articles has mostly focused on the speed and convenience of reading news on Facebook, Instant Video focuses on the cost and accessibility. That could make the feature a major boon to Facebook’s efforts in the developing world. There, mobile data prices can be quite high compared to average incomes, and spotty network connections can make watching video frustrating.

But if Facebook wants to be the social network of tomorrow, not just today, it knows it must whole-heartedly embrace video, which can deliver more vivid entertainment and interpersonal connection than text or photos. Interaction with mobile video is skyrocketing, according to a NewsWhip study shared by eMarketer showing a massive 53 percent year-over-year increase in engagement with news outlet videos on Instagram.

Video also carries lucrative advertisements that are closer to the television commercials that brands are accustomed to making. Getting people accustomed to watching organic videos can make them more receptive to watching video ads. Plus, Facebook is starting to allow video creators and publishers to insert video ad breaks into the middle of their clips, and splits the revenue, with 55 percent going to the creator. Instant Videos could potentially include these ad breaks.

By testing Instant Videos on Android, Facebook is laying the groundwork for both serving the developing world where iPhones are more rare, and more budget-conscious teens in the developed world. Combining forward-thinking accessibility initiatives with its engineering prowess and ubiquity could help Facebook excel beyond YouTube, Snapchat, Twitter and other competitors that also see video as the future.