In the bitter cold of a martian winter, 30 remote-controlled robots walk out of a holding bay across the icy terrain to begin their day in the mines. They pile in to the latest autonomous, hydrogen-powered Waymo rover, power down and charge up at docking ports… It’s going to be a long day.

Millions of miles away (roughly 33.9 million), in the Texas offices of Bechtel, 30 men and women are milling around the office, waiting to enter their cubicles and link up with their robot avatars. They’re chatting, drinking coffee, talking about the latest misadventures of Ivy Blue and North West.

A push notification alerts them that the rover has reached the mine. They file in to their offices, put on their gloves and VR headsets (maybe at this point they actually jack in to a feed) and start guiding their robots through the treacherous paces of mining ice on Mars.

Back in 2017 it’s hard to imagine that scenario could have its origins in the somewhat janky, certainly gimmicky stunts that SpaceVR is currently undertaking in sites around San Francisco, but the company, whose vision is bringing people to space through the power of VR and robotics, has to start somewhere.

So they’re starting… there.

The demonstrations of workers remotely operating robots that scoop ice cream or make tacos is little more than a publicity stunt. But it’s also an effective way to get at the singular vision of company founder and chief executive Ryan Holmes. 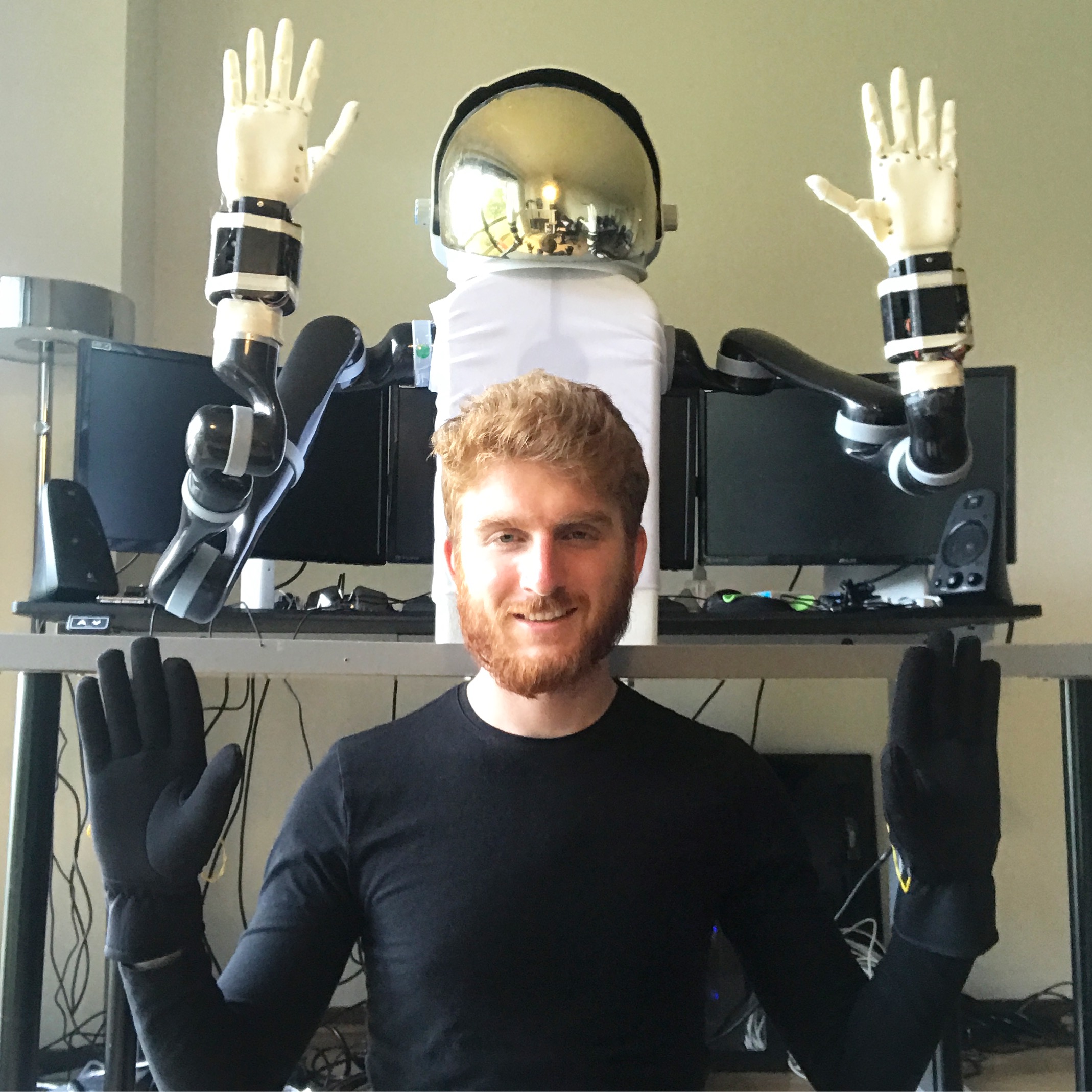 Holmes believes that a stereoscopic experience with immersive visuals and remote operators is the best way to get at the promise offered by space. And the exploration of other planets is far closer than anyone thinks.

Elon Musk, for instance, has a definitive goal of launching a mission to Mars by 2020. “We were focused on 2018, but we felt like we needed to put more resources and focus more heavily on our crew program and our Falcon Heavy program. So we’re looking more for the 2020 timeframe for that,” SpaceX president Gwynne Shotwell said at a launch conference earlier this year.

The question remains what to do in space once you get there. Holmes sees robotics as the easiest answer. Robots are cheaper and easier to send to space than people by several orders of magnitude. And, if sensing technology improves in the decade til the company’s robots make it out to space, then it’s even easier to see the value.

Companies like Syntouch, in Los Angeles, are already working on making sensors that can transmit the sensation of touch across distances, and to add that to robots would just be extending work the company is already doing around prosthetics.

Holmes has a set a target of deploying 10 million robots by the end of the decade. It’s an ambitious goal for someone with a crazy idea. But it’s a crazy idea that’s far closer to reality than the science fiction many may assume it is.

“We are automating all human tasks. Taking a different approach than all major companies. Our general purpose avatar, Human, was just demoed last week doing tasks in SF, controlled by me from Mexico City,” Holmes wrote to me in an email.

“First we’re going to undercut all labor prices by powering Human with low cost labor. Skipping all the major hurdles of perfect AI that all AI companies are facing. As these jobs are performed, we will introduce automation blocks one task at a time using the data gathered from the tasks being performed until all human tasks are automated.”
He envisions that this will free up humans to do higher-value tasks.

His company, which has been running demonstrations of its prototype remote-controlled robots around San Francisco, has high hopes for the interstellar market.

While the remote-controlled robot, operated by a Vive headset and sensor-enabled gloves, is little more than a gimmick now, SpaceVR’s founder and chief executive has high hopes for the lowly machines.

Holmes sees the robots as the second step in the company’s development. A means to get people comfortable with the stereoscopic manipulation and visualization capabilities that operating a robot from a VR headset can provide.

Ultimately, Holmes’ vision is to send millions of robots into space, operated by human controllers on earth to conduct tests and perform the manual labor on Mars that would be too expensive for a human to do.

It’s a wild vision, but one that may not be as far-fetched as it sounds. Startups like Planetary Resources are already looking at the potential to mine asteroids for minerals, and others are exploring the opportunities for specialty manufacturing opportunities afforded by zero gravity.