Pebble’s founder and former CEO Eric Migicovsky is back with his first new product since the smartwatch maker got rolled up into Fitbit last year. The PodCase doesn’t have the same sort of grand ambitions as his last project, but the new case is the kind of clever one-off product Kickstarter was designed to deliver.

Up top, a pair of AirPod slots sit just to the right of the case’s camera cut out, so users can charge Apple’s Bluetooth earbuds using the same 2,500 mAh battery that keeps the phone powered. The industrial design certainly looks solid, courtesy of Pebble lead designer Steve Johns — though the Mophie comparisons are pretty much unavoidable right out of the gate.

And, of course, between the two Pebble alum and Allen Evans, a co-founder of Glyph video headset makers Avegant, the PodCase has a pretty solid foundation. After all, during its half-decade existence, Pebble claimed three of the top five Kickstarter campaigns of all time — though, admittedly, the latest didn’t ultimately end up well for anyone, save, of course, for Fitbit.

In a conversation with TechCrunch, Migicovsky is quick to point out the team’s somewhat unorthodox approach to this release. It’s a cautious take on a product launch from a team of folks who have witnessed the ups and downs of launching a hardware startup firsthand. The trio has provided the initial funding to help bring the product to Kickstarter, and then it will play things by ear from there. In fact, the group refuses to refer to itself as a proper company, instead calling Nova Technologies, “a small group of technologists” on its new Kickstarter page. 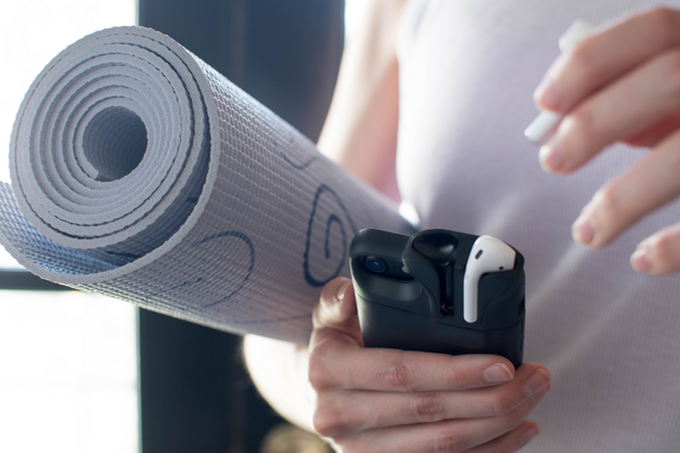 “There are some products that don’t need an entire company around them,” says  Migicovsky. “We probably won’t need to scale up to meet demand, but if we do, we can scale up to meet that demand. We’re not building a company that’s selling more and more of these cases every year or having to have a hit in order to meet our revenue numbers. If it sells, great. If it doesn’t, it’s not the end of the world. We have a lot of other projects behind this, waiting in the backlog.”

It’s a fairly zen approach from founders who have been through the wringer, but PodCase is a pretty clever first step that alleviates having to carry around an additional AirPod charging case. And the fact that it keeps the headphones with the user’s iPhone when not in use should lessen the likelihood of leaving them behind.

The PodCase Kickstarter page is live, offering up the accessory in both iPhone 7 and iPhone 7 Plus sizes, with the option to switch an order to the iPhone 8 after the phone is announced next week. If the group hits its $300,000 goal, it expects to start shipping in February.