Facebook wants to show you more of what you have in common with potential new friends and make sure you don’t forget about your old ones either.

The company is rolling out a feature that allows you to get a closer look at your friend’s buddies. It’s not only showcasing connections you’ve yet to make but a lot of current friends as well, which seems a bit odd, but I suppose it helps you orient yourself with friends you haven’t interacted with in a bit. 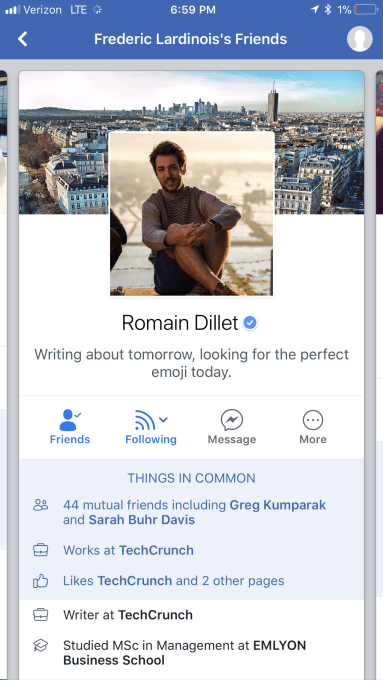 Don’t worry, I charged my phone

Once you tap on a button urging you to “get to know [name’s] friends” you’re cast into a carousel of the connections. Previously, the most prominent way Facebook orients you with potential new friends was by showing you your mutual friends. This option digs deeper, showing you events that you both attended, pages you both like, places you’ve both worked or lived.

In February, Facebook began rolling out “Discover People,” a feature designed to help you find new connections largely through groups and events. The friend cards are the same here, but this roll out throws them into a more wide feature release.

Facebook is also looking to get you closer to some of the friends you already have in the app. Motherboard reports that a new feature is bringing some Tinder-like functionality to Messenger, allowing users to connect if they both indicate that they’re interested in hanging out. It’s also a little reminiscent of some of Snapchat’s efforts to get you to interact with friends you haven’t traded messages with in a while. Having this functionality inside Messenger is, again, a bit of an odd choice given that you’d have to switch to the main app to view a person’s profiles.

There doesn’t seem to be any clear “dating app” language present instead it’s more focused on friendly encounters, i.e. “Would you like to meet up with [name] this week?” The changes that would need to be taken to transform this feature into a Tinder or Bumble-like applet don’t take any major mental leaps though and dating could be a huge move for the company in the future.

Ultimately, Facebook is better with friends and even if the connection suggestions that Facebook comes up with are already stellar, it’s good to see some of the thinking that’s being done behind the scenes in terms of common interests.