In today’s edition of unfettered corporate greed, we bring you the Equifax managers who apparently sold almost $1.8 million in stock after the company became aware that it had a big problem on its hands.

As Bloomberg reports, three of the company’s senior executives sold nearly $1.8 million in shares after the company learned internally that it had exposed the private data, including social security and driver’s license numbers, of as many as 143 million people in the U.S.

The transactions in question were initiated by Chief Financial Officer and Corporate VP John Gamble, who sold $946,374 worth of shares; President of U.S. Information Solutions Joseph Loughran, who dumped $584,099; and President of Workforce Solutions Rodolfo Ploder, who sold $250,458 in shares. As Bloomberg notes, these transactions were not pre-scheduled trades and they took place on August 2, three days after the company learned of the hack. 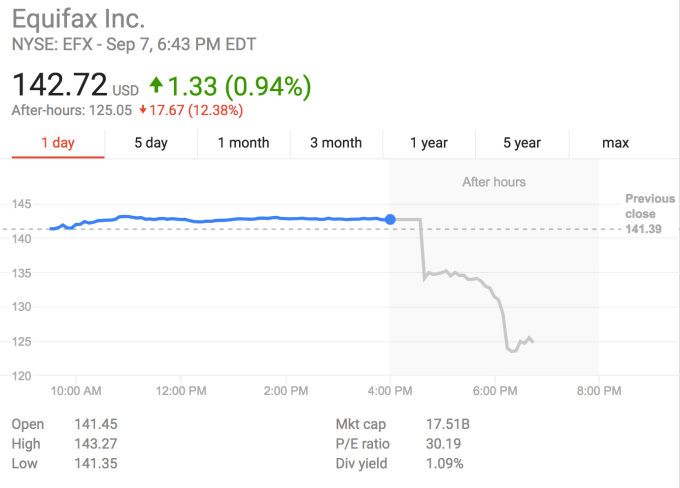 While news of the massive privacy failure just blew up, the hack took place from mid-May to July. The company described the hack in a statement on Thursday:

Equifax has set up a dedicated website for anyone potentially affected by the hack, but on top of asking freshly screwed customers to give Equifax their social security numbers, it doesn’t provide any actual functionality at the time of writing.

Update: Equifax responded to TechCrunch’s questions about the timing of the transactions, particularly those of CFO John Gamble, with the following statement claiming that the executives in question were not aware of the hack which the company was made aware of on July 29:

“As announced in the press release, Equifax discovered the cybersecurity incident on Saturday, July 29. The company acted immediately to stop the intrusion.

The three executives who sold a small percentage of their Equifax shares on Tuesday, August 1, and Wednesday, August 2, had no knowledge that an intrusion had occurred at the time they sold their shares.”

At first glance it might appear odd that these execs would sell such seemingly small amounts of stock. But it’s important to remember that Equifax is over 100 years old. We’re not dealing with a startup where a founder owns 20+ percent of a company’s stock.

Gamble, for example, only owns 42,078 shares of Equifax stock. As of close of market today, prior to the massive after-hours drop, this stock would have been worth about $6 million. So in this case, while $946,374 might not seem like a lot for a CFO, it’s actually over 15 percent of his holdings.

Of course none of this really means anything. All of this is just to say the transaction is sketchy. But the reality is that we’re in no position to call this a securities violation. That determination could only be made after an actual investigation.