Lightricks, the company behind the popular selfie-correcting app called Facetune, is adding to its line of mobile photography and editing tools with the recent launch of a new app called Quickshot. Like its other efforts in this space, Quickshot aims to make photo editing more accessible to amateurs. However, in this case, the app’s focus is to assist with taking photos, not just correcting them after the fact.

The app’s name references one tool in particular – a “quickshot” mode which will automatically align your photos, fix the lighting and preview filters before you even snap the picture. The idea is that you’ll be able to take better photos if you can see what they’ll look like before you press the capture button.

Other modes include the “strobe” mode that lets you capture action and movement by mimicking strobe lights and long exposures, and an “HDR” mode that helps with tricky lighting situations. 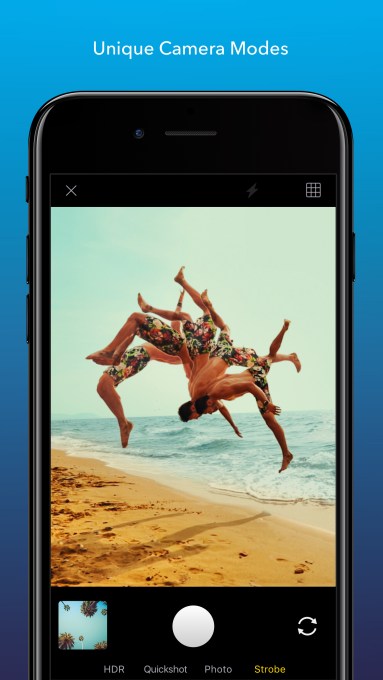 Beyond these different camera modes, the app also ships with a range of adjustable presets for various scenes, like portraits, nature, urban, and more. That way, novice photographers don’t have to fiddle with various settings to take the best photo, while more advanced users can load a preset then tweak it further to their liking. 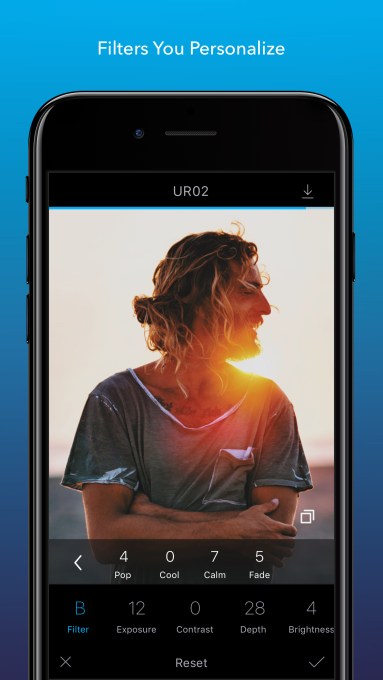 The ability to customize your filter in order to give your photos a unique, personalized look is something that draws people to other top photo apps, like Instagram, Snapseed, and VSCO, for example. But with Quickshot, the larger idea is to combine favorite tools like photo filters with Lightricks’ understanding of making photo edits easier through tricks like instant fixes and other tools that can speed up the process.

For example, Quickshot’s batch editor that lets you adjust a single style – like the filter, brightness, depth and more – and then apply it multiple images all at once. 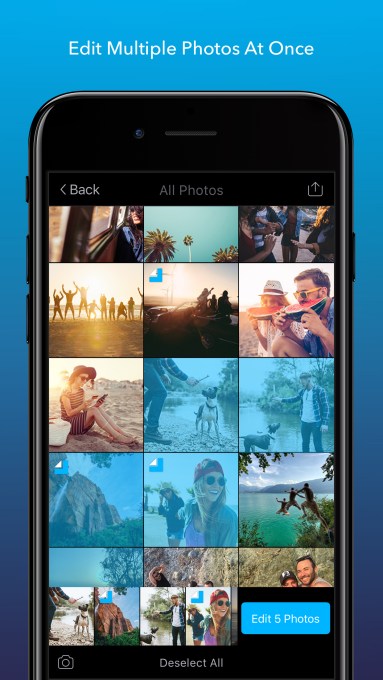 Quickshot is the latest app in a growing lineup of apps from Lightricks, which has been aiming to capitalize on its success with Facetune to launch a subscription business for its creativity tools. Earlier this summer, it debuted a new photo editor called Enlight Photofox, which is basically the upgraded version of the existing Enlight app.

It’s still somewhat rare to see this strategy play out on today’s App Store. Developers are often expected to roll out new features as upgrades to existing apps, not as new ones. Tweetbot, a Twitter client, has been one exception to this rule, which applies more so to apps than games. It’s far more common for sequels to arrive as their own standalone games, as with Monument 2, for instance.

Like Enlight Photofox and Facetune 2, Quickshot is also a subscription offering. While the app itself is free, an “unlimited access subscription” offers all the app’s features and content, for either $1.99 per month, $0.83 per month if you pay for a year upfront, or $19.99 for life.

Because of this model, Quickshot is getting slammed in the App Store reviews from those who feel like it doesn’t offer enough features to justify this pricing. The app currently has a 2.3-star rating (out of 5). This, unfortunately, speaks to a larger problem with the App Store’s business model – developers who believe their work is worth paying for are penalized because there are so many free alternatives available they have to compete against, and because the App Store has propagated the belief that because apps are small, they should cost less than desktop software.

Lightricks, before the shift to subscriptions, sold a healthy 11 million paid downloads of its apps. But despite the pushback from users about subscriptions, the company claims they’ve enabled it to increase revenues.

“Regarding the pivot to subscription model we can definitely confirm that there has a been a significant uptick in revenue run rates,” says Itai Tsiddon, Lightricks co-founder. “However, at this time, we are not yet disclosing specific numbers,” he says, adding that the company will release more details around the end of year.