GetAccept co-founder Mathias Thulin is very familiar with a common problem sales representatives have: they have a great meeting with a potential customer, fire off an email to follow up on that deal and send a thank you note, and then hear nothing back.

With all these leads going dark, Thulin and his co-founder Samir Smajic wanted to dig into the data to figure out what was happening. To do that, they decided to start GetAccept, an e-signature service that helps representatives track their documents and help close those deals. The start-up today said that it has raised $1.6 million in a seed funding round from Amino Capital and Y Combinator, as well as other angel investors. GetAccept came out of Y Combinator in 2016.

“Too many times you had a great meeting that you just said, ah I love this, send me a proposal and I will talk with my manager and get back to you next week,” Thulin said. “Then, they just go dark. There are much more decision-makers involved that they tell you about, and also that it’s so hard to understand how engaged they actually are. You don’t know what’s happening after you sent the proposal. It’s so easy to ignore your inbox and phone when you try to follow-up with a sales rep.”

Internally, GetAccept analyses a sales representative’s behavior to see why they are closing on more deals, or vice versa. It looks for cues, like a sales representative including a product demo or the company connecting directly through a chat bot that then connects them directly to another representative. These sales representatives can also lean on retargeting, chasing their leads across platforms in order to build that awareness. Thulin argues that it’s all these light touches that can help companies close that deal, but often times they just go overlooked. 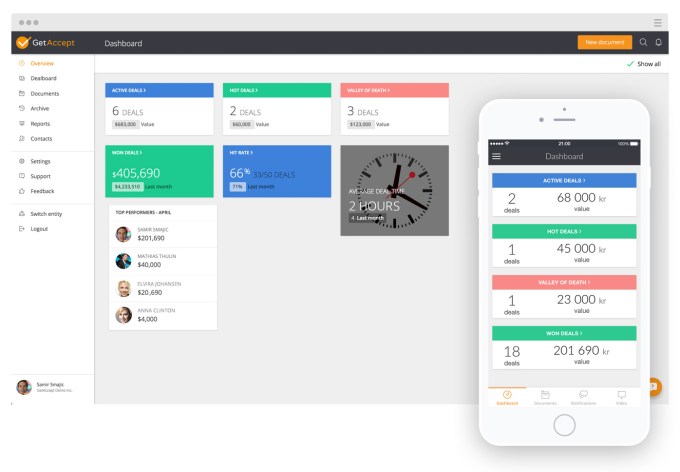 He also likes to say that his startup is based on artificial intelligence — though you won’t find it at the deep, complex level of a convolutional neural network. But there is certainly some learning happening in the background, with algorithms studying the behavior of the best sales people and the trick and quirks they have that are helping them close better sales leads. It’s not some kind of hardcore AI that would come out of a lab at Stanford, but this kind of self-reflecting software is a hallmark of many emerging enterprise sales startups that look to help businesses streamline their processes.

“If we could find the triggers that could help push the deal forward, we would do it,” Smajic said. “We see that it’s really for different reasons why sales reps can push the lead forward. If [potential customers] don’t open the document in 24 hours, then we definitely need to address it. We also see another case that if they forward it to other people [in the organization] that the deal will be postponed because there are people involved. We figured out we couldn’t use generic tools, and that was the reason.”

GetAccept, with this seed funding, still faces an uphill battle against e-signature companies like DocuSign and lead tracking from existing lead-tracking CRM start-ups like Gong or Attach. Those are two very significant markets, though Smajic says that by targeting a product that does both of them will help them outmaneuver the companies that look to eventually dig into each others’ territories. Getting there first will help, though it remains to be seen if they will be able to get the kind of widespread adoption that these companies have already built up.