Twitter lost streaming rights NFL Thursday Night Football games to Amazon this season, in a deal valued at around $50 million – up from the $10 million Twitter had paid previously. However, the social network is still working with the NFL to bring exclusive streaming sports content to its site. Starting tonight at 7 PM ET, the NFL will debut its new, 30-minute live show, called #NFLBlitz, on Twitter.

In addition, Twitter will simulcast live coverage of NFL Media’s Fantasy Gameday airing at 11 AM ET on Sundays during the regular season on NFL.com, the company says.

News of Twitter’s renewed partnership with the NFL was previously announced at the Digital Newfronts this May. The two organizations said then they had signed a multi-year agreement that would bring live sports programming to Twitter’s service. This would include things like breaking news, highlights, fantasy projections, pre-game updates, key storylines, team power rankings, and more, Twitter said. 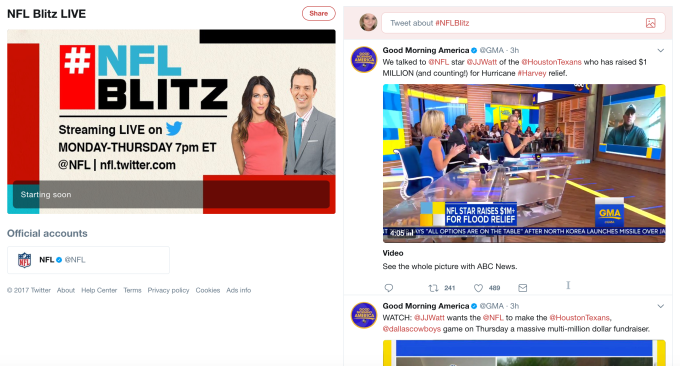 The new #NFLBlitz program will be hosted by Marc Istook (@MarcIstook) and Erin Coscarelli (@erincoscarelli), and is produced by NFL Network from its L.A.-based studios. It will air on Twitter via NFL.twitter.coma and via the @NFL Twitter account.

The show’s format will leverage Twitter’s social and conversational medium to drive its programming, as well.

For example, hosts Istook and Coscarelli will talk about the top NFL trends based on social metrics, data and buzz, and they’ll incorporate fan reaction and opinion as voiced through Twitter.

The program will also include guest appearances by other NFL Network talent and current NFL stars.

Twitter’s live streaming property Periscope will be integrated, too, bringing live, pre-game access and other interviews to the social network.

Twitter may not have been the best place for the NFL to live stream its games in the first place, especially when the NFL had the option to reach more fans via a site like Amazon, where games are a perk for Amazon Prime members.

Twitter’s audience is still small, compared with TV. The NFL had said last season that over 2 million watched the debut game on Twitter, but 48 million watched on TV. (Twitter today has 328 million users, but is losing U.S. users.) Some fans also felt that having tweets display alongside the game was distracting.

Amazon Prime, on the other hand, has somewhere between 65 million to 80+ million Prime members, depending on which source you go by. (Amazon doesn’t confirm its numbers.)

An NFL-themed show where fan conversations is encouraged, however, may make more sense.

While Twitter didn’t win the deal for the games, it aims to make at least some money from the NFL’s programming – the show will be ad-supported, with Twitter and the NFL splitting the revenue. (The companies did not detail the split).

The NFL’s show was one of several new programs announced at May’s Newfronts, alongside those from the WNBA, BuzzFeed, Viacom, Bloomberg and others.