Uber’s search for a replacement for its former co-founder CEO Travis Kalanick looks to have reached its conclusion.

Dara Khosrowshahi, the current CEO of Expedia, has been officially offered the job, multiple sources close to the company confirmed to TechCrunch.

Unlike higher-profile Uber CEO candidates Meg Whitman of HP and Jeff Immelt of GE, Khosrowshahi is fairly under the radar. That’s likely because Expedia isn’t based in Silicon Valley, it’s in Bellevue, Washington, and it has led to some surprise over the decision to select Khosrowshahi as Uber’s next leader. That’s assuming that he accepts the role, of course.

From immigrant to publicly traded CEO

So who is Dara Khosrowshahi?

Khosrowshahi was born in Iran in 1969, but he emigrated to the U.S. as a child in 1978 following the Iranian Revolution. His father was detained by Iranian authorities for six years after he returned to the country to look after his father when Khosrowshahi was aged 13. Khosrowshahi grew up in the New York State area with his mother and two brothers.

After graduating with an electrical engineering degree from Brown University, Khosrowshahi joined Allen and Co as an analyst in 1991. His move into travel came when he joined USA Networks (now IAC) in 1998 and the company went on to acquire a majority stake in Expedia, then a subsidiary of Microsoft, in 2001 at a valuation of around $2 billion.

Khosrowshahi took the reigns of Expedia in 2005, when it was spun out from IAC, where he had previously led its travel business unit. Under his leadership Expedia has grown to a $23 billion giant with a presence across the world. Revenue has jumped from $2.1 billion in 2005 to $8.7 billion in 2016.

That development led to a bumper pay packet for the Expedia boss, who was the highest paid CEO in the S&P 500 two years ago when his salary came in at nearly $95 million thanks to stock incentives. His compensation returned to a more modest $2.5 million last year.

Deal-making has been a critical component to Expedia’s growth, with the company expanding its presence into new verticals and geographies through over 20 acquisitions and investments. Besides its Expedia.com business it owns a bunch of highly trafficked travel and rental sites that include Hotels.com, HomeAway, Travelocity, Orbitz and Trivago.

Some of the major M&A that Khosrowshahi has presided over includes the acquisitions of HomeAway ($3.9 billion), Travelocity ($280 million) and Orbitz ($1.6 billion) in the past two years.

Interestingly, like Uber, Expedia has exited the Chinese market due to aggressive local competitors, too. It sold its stake in long-time partner eLong in 2015.

Speaking in 2016, Khosrowshahi acknowledged that Expedia had done ok in China in terms of business and revenue, but it opted to exit the market after the competition “became price destructive.” Expedia is still active today since it targets outbound Chinese travelers, but Khosrowshahi said it not longer focuses on the domestic market because its rivals know that area far better.

That’s not at all unlike the reason Uber sold its China business to local rival Didi last year. 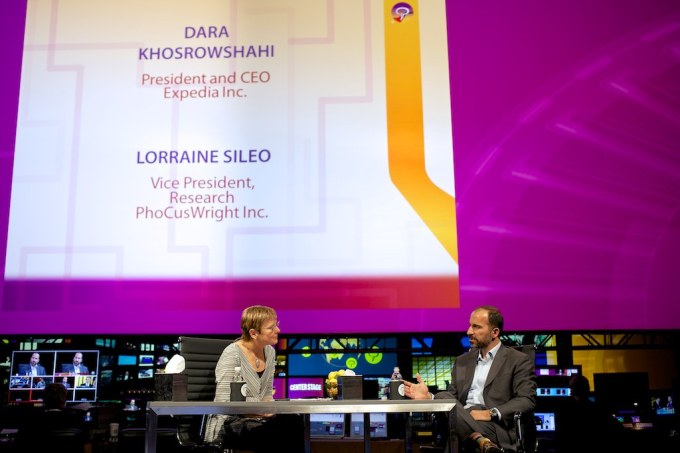 Khosrowshahi interviewed at an event in 2012 [Credit: George Grinsted/Flickr]

When it comes to politics — a topic getting increased play within the tech industry — Khosrowshahi is notable for his vocal opposition to U.S. President Trump’s initiatives.

Expedia — alongside Microsoft and Amazon — was among the first tech companies to support efforts to declare Trump’s Executive Order on immigration unconstitutional. Khosrowshahi himself criticized the travel ban implemented on several Muslim-majority countries, including Iran, which is not surprising given his background.

“I believe that with this Executive Order, our President has reverted to the short game. The U.S. may be ever so slightly less dangerous as a place to live, but it will certainly be seen as a smaller nation, one that is inward-looking versus forward thinking, reactionary versus visionary,” he wrote to employees in an email.

Back in February, after the travel ban was announced, he ended an earnings call with analysts saying: “Hopefully we will all be alive to see the end of next year.”

Khosrowshahi is pretty active on Twitter for a public company CEO, and he’s put out some barbs aimed at the Trump administration.

This one came after Trump’s election victory last year:

As tech leaders we have to admit that we are hugely disconnected with our nation. I don't like it but have to recognize this issue.

He encouraged people to travel and learn more about others following Trump’s first day in office:

Peek over your neighbor’s fence to see the other side. The difference is YOU. https://t.co/6K679FVVAM #LifeatExpedia #TraveltheWorldBetter

And more recently he criticized the president following his reaction to the Charlottesville violence:

I keep waiting for the moment when our Prez will rise to the expectations of his office and he fails, repeatedly. https://t.co/WlxTkRfC71

His public position marks a very different one to that of Uber, which was tarnished through its early association with the President.

Kalanick quit the President’s business advisory council — which has since been scrapped altogether — in February following intense public scrutiny. The then-Uber CEO had planned to discuss Trump’s travel ban with the President in a bid to reverse it, but blowback from the decision to work directly with Trump and not to resign from the council began to impact Uber’s business.

Kalanick’s association with the administration was at least in part responsible for the #DeleteUber campaign on social media which resulted in rival Lyft surpassing Uber’s app in popularity for the first time.

The #DeleteUber and negative sentiment around the company returned when former engineer Susan Fowler revealed repeated sexual harassment issues during her tenure at the company. While Uber has often been known for a ‘tech bro’ culture, Fowler’s claims resulted in a wider report which ultimately ended with the removal of a number of top executives, including SVP Emil Michaels, and the implementation of reforms aimed at improving Uber’s culture.

Expedia, meanwhile, has a far better reputation for gender balance. Last summer, it revealed that just over half of its staff are female and average pay is equal between men and women employed employed at the company.

Despite a progressive position, Khosrowshahi chose to focus on the fact that just one-third of his company’s senior management is female.

“While we compare well with many of our technology peers, we have a long way to go in bringing more female representation into leadership roles. We need to attract, hire, engage and promote talent of all kinds all around the world, and we believe that by enriching the diversity of our work force across all dimensions, including gender, we achieve the most enriched outcomes,” he said in a statement at the time.

Outside of Presidential politics and diversity matters, Uber and Khosrowshahi have a common enemy: Google.

Uber is currently locked in a war with Google over the theft of self-driving car technology from the search giant. The case is set to go court in October

Khosrowshahi’s has long had issues with Google — through Expedia — around the way it allegedly uses its search engine to benefit its business units at the expense of competitors.

Expedia is one of the companies that made a formal complaint which led to the European Commission hitting Google with a $2.7 billion fine, one of the most significant antitrust rulings in Europe since the 2004 Microsoft decision.

Google has long been a threat to Expedia, which explains the awkward relationship. The travel firm has lost search visibility and traffic to Google algorithms, while Google’s own travel business has grown to be twice the size of Expedia, according to some reports.

For more on Khosrowshahi’s general style, here’s an interview with analyst firm Phocuswright from early 2016.

You may well see a lot more of this name and face going forward.