Stadium, the live streaming sports network that just this week partnered with Facebook for exclusive broadcasts of college football games, is today bringing live streamed sports to Twitter. The network will run 24 hours a day on Twitter, broadcasting live and on-demand games and events, highlights, classic games, as well as original and daily live studio programming. These streams will be available via the @WatchStadium Twitter account, as well as Stadium’s own website and the streaming service Pluto TV.

The deal to include sports streams from Stadium was previously announced at Twitter’s NewFronts back in May, where the social network detailed an upcoming slate of programming which also included both new and expanded deals with Bloomberg, the NFL, MLB, PGA Tour, the WNBA, BuzzFeed, Cheddar, Viacom and others.

On Twitter, Stadium’s programming will only be available to U.S. users.

By streaming video to Twitter, Stadium hopes to drive traffic back to its linear network WatchStadium.com, where sports fans are able to watch an additional 2,500+ college games. This lineup includes football, men’s and women’s basketball, lacrosse, and volleyball events from conferences such as the Mountain West, West Coast Conference, Patriot League, Conference USA and Southern Conference, the company says. 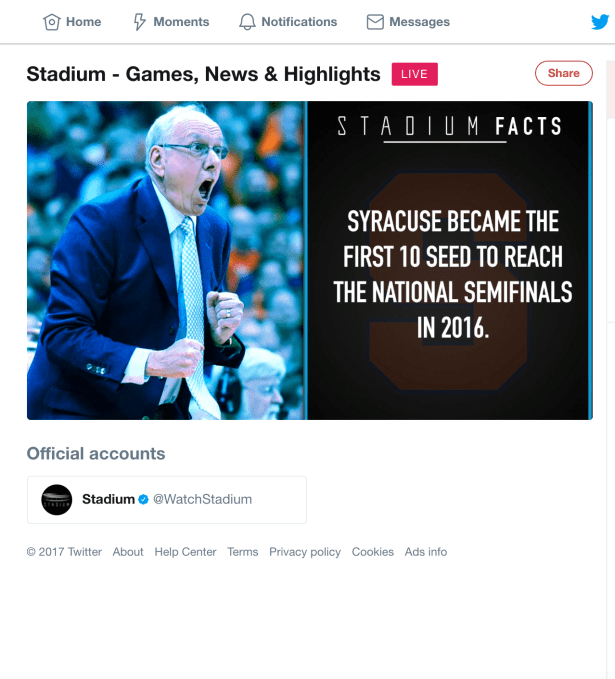 The company will soon begin selling subscription access to its broadcasts, through a package called Stadium Plus. This will offer paying customers the ability to watch over 500 exclusive games, classic events and commercial free “Stadium TV” re-airs as well as video-on-demand content. This will cost $4.99 per month.

“We stand alone in our ability and enthusiasm for taking the concept of a television style 24/7 network into a new digital marketplace and aligning our distribution with current fan behaviors and next generation platforms,” said Stadium CEO Jason Coyle, in a statement about the launch.

Stadium says it’s preparing for its over-the-air launch of its 24/7 sports network, which is scheduled for next month.