Adding real-world diversity to emoji is a work in progress, but with platforms spanning the entire globe, it’s clearly important to big companies like Facebook. The social network just rolled out a set of new “family” emoji that, while they don’t yet capture the full spectrum, at least let your partner and kids have something other than yellow skin.

It’s live right now in the desktop and mobile site — but not Messenger, which for some reason uses different emoji, or the mobile app. All you have to do is pull down the emoji menu, then do a long click on the family emoji — your options should appear above the default yellow-skinned emoji. 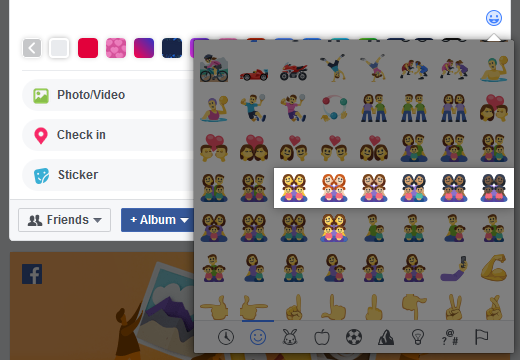 So why did this take so long? Well, standards take a while to set, and the UTF standard for modifying the skin color of emoji had to be developed and agreed upon. And once that happens, it’s up to platforms how they want to implement that standard.

In this case, it was Microsoft that jumped on the possibility of diverse family emoji first — more than a year ago. But see if you can spot the difference between the ones above and Microsoft’s:

Yeah — diversity is complicated! Families frequently aren’t all black, all brown, or all yellow. Reflecting real diversity in families is different from doing so with individuals. And the encoding process is different, too.

Normally you have the emoji (👩‍🚀) and a skin tone (🏽) joined by a special character that tells the system to combine them, producing an emoji with that skin tone (👩🏽‍🚀). But families aren’t so easily encoded, so to speak. What if you have an hispanic man who has married a black woman, and they have a son with lighter skin and a daughter who favors her mother? Turns out there are 52,000 options for combining the different genders and colors.

There’s an existing code grammar for this, but it isn’t well supported — if you saw one of their complex families on other platforms, it wouldn’t render properly. Instead it shows as a sequence of each person in the family — actually a rather graceful failure.

Anyway, back to Facebook. They’re all about ease of use, and having 52,000 options pop up in the emoji menu isn’t a good user experience. So for now the social network opted to keep things monochrome in a fashion, though less monochrome than they were before. Yellow faces may be a decent alternative for people whose skin tone actually resembles it, but people with darker skin will surely appreciate this option, even if it isn’t comprehensive yet.

I’ve asked Facebook if it plans to add multi-tone families any time soon, and I’ll update this if I hear back.