It’s not really clear just what “humanoid” robots are actually for. I’ve seen them do all kinds of things, but almost none of them well; at our recent Robotics event in Boston, several leading experts in the field questioned their necessity. But we grew up with Data and Robby and Cylons, and so now we have Pepper. Pepper, performing funeral rites for cash-strapped people in Japan. Really?

This week is ENDEX, the Tokyo International Funeral and Cemetery Show and Life Ending Industry Expo — which, sure, isn’t for everyone, but honestly is a very important industry and one in which technology plays an increasing role.

But while I can get behind the idea of robotic grave cleaners, epitaph etchers, urn retrievers and things along those lines, this seems like a step in the wrong direction. 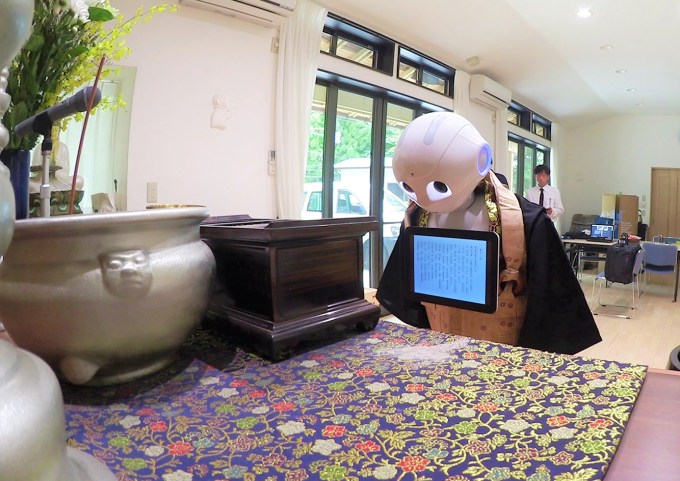 Pepper can bend its body, but it can’t bow, because bowing is an expression of respect and Pepper can neither express itself or feel respect.

According to the Japan Times, “Kanagawa-based Nissei Eco Co. will offer Pepper — billed as the world’s first robot that can read emotions — to chant Buddhist sutras at funerals, providing a cheaper alternative to human priests.”

(Just as a quick aside, I don’t buy that Pepper actually reads emotions — no robot or computer vision system can do that. Hell, neither can I most of the time.)

It’s meant to help bring down the costs of funerary services in Japan, where (as elsewhere) they can run into the tens of thousands of dollars. And a real monk would be doing the main part, while Pepper would just be doing the backup sutras. But this is just a bad, dumb idea.

It’s a bad idea to introduce autonomy, or any machine really, into a situation that fundamentally calls for respect and sympathy, because machines have neither.

And it’s a dumb idea because Pepper specifically isn’t good at this job! Humanoid robots are created with the idea of existing and interacting with human spaces. There’s nothing about a human-shaped machine that makes it better at praying. If anything, it’s a mockery of the devotion and care that prayer is meant to embody. Not to mention the whole no-souls thing.

Mechanically it’s no better than playing an MP3 of the sutras on repeat, though it’s a great deal more expensive.

We have to consider with care how we integrate robots, AI, the internet and other technological advances into our lives and cultures. Dull, dirty, and dangerous work (the “three Ds”) are a perfect fit. Shoehorning them in where people are vulnerable like this and need a human touch is distasteful and bizarre.