Smart access startup Latch, which targets the enterprise market in the U.S., selling smart lock hardware and access control services to building owners and operators, has added a third product to its portfolio.

The ‘Latch C’ is notable as its first smart lock to be certified to work with HomeKit — Apple’s hardware certification program for makers of connected devices wanting to integrate with the iOS ecosystem.

Latch says it’s also the first “enterprise-certified smart lock” to work with HomeKit — enabling tenants living in apartments equipped with the device to connect it with other HomeKit devices inside their apartments to, for example, have their smart bulbs come on automatically when they return.

The Latch C also integrates into the iOS Home app and includes support for Siri — so a user could also ask the iOS voice assistant to open their door, say if they have their hands full of shopping. (Latch argues having an “intent signal”, such as voice or a tap, is more secure than ‘passive unlock’ approaches, just based on proximity detection.)

The smart lock includes Bluetooth, Wi-fi and NFC, as well as a wide-angle camera, a touchscreen and additional sensor tech to support its various capabilities — including unlocking doors with smartphones, keycards and doorcodes (supporting shared and temporary access, such as with delivery providers); and enabling the monitoring and managing of guest access (through camera and digital log). Also still present: a traditional key slot should a user prefer to continue packing metal.

The Latch C is designed to be installed on individual apartment doors that are equipped with a deadbolt, whereas Latch’s first product, the Latch M, works with mortise locks. This March the company also announced the Latch R: a reader-style electronic access product for building entrances, including lobby turnstiles and elevators.

With all three products co-founder Luke Schoenfelder says Latch is able to address a full spectrum of multi-unit and residential buildings across the U.S. — noting, for example, that “in some geographies, particularly in the American south and in some places in California, they use deadbolts in apartment buildings more than they use mortise locks”.

The Latch C could also be installed by building operators that lease standalone individual houses — with Schoenfelder pointing to the likes of Invitation Homes, which leases 50,000 homes across the U.S., as another type of potential customer for its sales pitch. (It’s worth noting Latch counts a number of funds from the real estate sector among its investors as strategic backers.)

“The mortise product [Latch M] is required by law in most major urban markets… and now, with the C, we’re able to work on any apartment door in the U.S. — so this really just completes the suite,” says Schoenfelder. 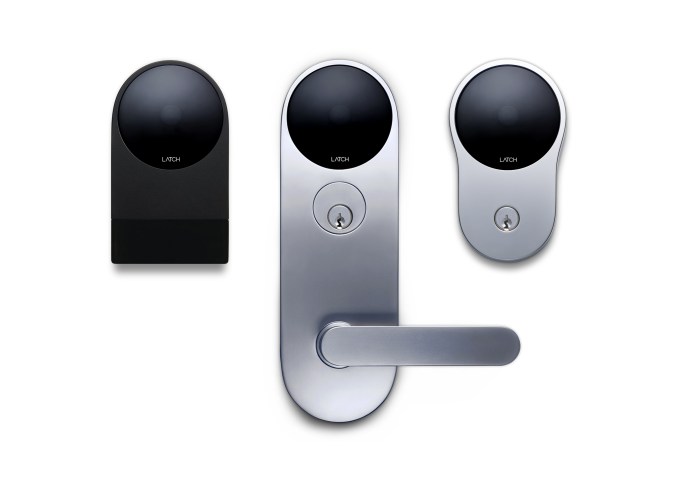 In an interesting development last month, Latch inked a deal with online retailer Jet to split the cost of installing its R smart locks on 1,000 urban residential buildings (with a total of 100,000 occupants) — revealing a strategy for growth that’s focused on selling smart access as an enabler of other, already in-demand digital services.

Latch presumably won Jet’s financial (and marketing) buy-in by pitching its smart access product as an enabler of Jet’s ecommerce — making it easier for the e-tailer to deliver to more customers (e.g. people in multi-apartment buildings without a receptionist or doorman to take parcels).

Though it’s also notable that Latch is part-funding some installations itself — to try to prime the pump for enterprise smart access in the residential buildings sector.

Its overarching thesis for targeting buildings owners/operators vs trying to convince consumers there’s value in the faff (and risk) of installing and maintaining a smart lock themselves, is that b2b offers the ability to accelerate uptake and buy-in of the technology and its benefits as deployments happen in large-scale chunks.

So while individual consumers may well remain sceptical about handling the cost of a smart lock themselves, building owners and operators can offer reassuringly certified smart access as a value-add service to their tenants, incentivized by the prospect of happier tenants who value the ability to receive Jet deliveries or Amazon parcels, or share temporary access to their home with their babysitter, and so on.

Albeit, if Latch’s product ends up making it easier for tenants to sublet apartments via home-sharing platforms such as Airbnb the startup may face something of a balancing act to manage competing interests. After all, putting a smart lock on a door is really an invitation to a whole range of new behaviors — and while landlords may be happy to indulge some of them, others may prove a sticking point.

“The next generation of consumers, many of them are not going to own their own homes. And are not going to own their own homes for quite a bit of time. And so the desire to bring the HomeKit experience to them is one of the really exciting things about this partnership,” says Schoenfelder. “We’re able to bring this HomeKit experience to products and spaces that otherwise you wouldn’t be able to have because if you don’t own your own place you’re not able to install a smart lock.”

He goes so far as to couch it as Latch giving Apple “a unique opportunity to bring HomeKit to an enterprise context”.

“Whereas, before, HomeKit has been really about a small group of users interacting with a product in a single family home, this allows us to have these really rich, many, many users to a single device [scenario]. So you can have one common area door that now 250 people are using, so you’re getting that exposure to this ecosystem and to the possibilities in a really magnified way.

“We’re really excited to align with [Apple’s] vision for — and to help further — what the vision of the modern building looks,” he adds.

The Latch C is priced at $299 per lock, plus the cost of a Latch subscription software plan service. Latch is taking pre-orders for the C now, with the first buildings due to receive the device this fall, according to Schoenfelder. (He won’t break out overall sales metrics across all the Latch locks as yet — claiming only that “they’re good”.)

The startup, which includes two ex-Apple employees among its three co-founders (Schoenfelder; and chief design officer Thomas Meyerhoffer), has raised a total of $26M since being founded in 2014 — most recently topping up its Series A with a further $10M this May.