London-based startup Acasa has come a long way since we covered its seed round in late 2015. The company, then called Splittable, offered a way to manage and share household expenses with multiple house members. However, the bigger vision was to build a platform for ‘Generation Rent’ that makes moving from one houseshare to another as easy as logging in and out of the Acasa app. A spew of recent updates (including the name change itself) are seeing that vision begin to come into focus.

Within the Acasa web and mobile apps, household members in the U.K. can set up, manage and split costs for their energy, broadband, water and TV license provision, whilst I’m told Council Tax will be added soon. To achieve this, the startup has partnered with a number of ‘challenger services,’ including broadband company Origin, and green energy provider Octopus Energy. It’s also penned a partnership with Virgin Media to offer the telco’s broadband services directly in the Acasa app.

“Running a home sucks, it’s still analogue, archaic, and arduous,” Acasa co-founder and CEO Nicholas Katz tells me. “One person always gets screwed over by having to be the one in charge of bills/finances (which also means they take on all the credit risk which most renters don’t realise!). Eight days of every year of your life are wasted dealing with home finances, setting up bills, talking to providers, chasing people you live with for money”.

That pain-point was one Katz says he’s experienced directly as a bonafide member of Generation Rent. He claims to have rented 17 homes and lived with over 50 housemates in 4 different countries (U.S., U.K., Israel, Germany). “I’m an “expert” at dealing with housemate and shared housing issues,” he jokes. 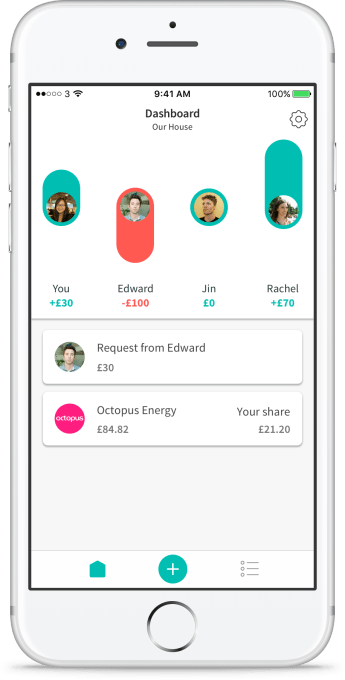 To get started with the Acasa app you register a user profile and then choose from the types of services you want to set up. Currently this includes energy, Internet, TV license, water, with more coming soon. After adding some basic information about your home (ie how many people you live with, number of rooms, etc.), Acasa will provide a quote for all of these services.

After a home is set up, a digital “magnet” for each supplier appears on the Acasa dashboard, which you click on to adjust how the cost is split between the people in your home or to learn more about the supplier.

Then when the bill is due, the magnet on the home will adjust automatically to represent how much each of you owe to the service provider, and each person is automatically charged the agreed portion of the bill and the money is collected by Acasa and sent to the supplier in one lump sum.

“The magnet sets back to zero and it’s happy living until the next month’s bill is due,” explains Katz.

The ultimate goal, however, is to make setting up a new home a one-click affair, with all of your required services automatically signed up to and trackable. A “technology layer for the home,” is how Katz describes it, something akin to the way co-working space provider WeWork has built what it calls a co-working Operating System. A convenience layer might also be an apt description.

The other aspect to Acasa as a platform is that you only need to make a user profile once, meaning that your Acasa credentials move house with you, either so you can be added to an existing Acasa-powered houseshare or create a new household of your own. That not only helps to make the app sticky but is a potential viral loop, too.

Meanwhile, since launching in 2015, the company has grown to a team of 9, with over 150,000 app downloads and on average tracks £5 million in home costs every month. In addition, I’m told that Acasa’s peer-to-peer money transfer service, which is only available to users in the U.K., despite the app being global, now averages £50,000 a month.

The startup is publicly backed to the tune of $1.2 million from VCs Seedcamp, Playfair Capital, the London Co-Investment Fund and a number of angel investors, but I understand has since closed a further follow-on investment round for an undisclosed amount. I’m also hearing that Acasa is currently raising additional funding, most likely a fully-fledged Series A.

“I love the idea of leveraging technology to help people live better at home. It’s amazing to feel and hear how we are genuinely helping people improve their relationships with the people they live with as well as the suppliers they usually have an absolutely fucking miserable time with — think back to the last joyful moment you had talking to one of your utility companies,” adds the Acasa CEO.