The pursuit of finding the best electric skateboard continues, with a startup based out of Orange County, California called Huger Tech. The board in question, named the Racer, is supposed to be the most bang for your buck, but with better performance than the two current leading electric skateboards — the Boosted Board and Inboard.

However, on the streets of Manhattan, the gap between the Racer and the other boards is huge.

Specs only tell part of the experience for a product like this, but they are entirely worth mentioning. The Racer board weighs 15.7 pounds, has a top range of 20 miles, a top speed of 25 mph, front and back LED lights for night riding, IPX6 waterproofing, an incline grade of 25 percent and finally, a recharge time of two to three hours. Overall it’s not a bad spec sheet.

The model I’ve been testing is pre-production, with only a few differences from the final production models: better grip tape on the board’s standing surface and bolted down wires on the undercarriage. 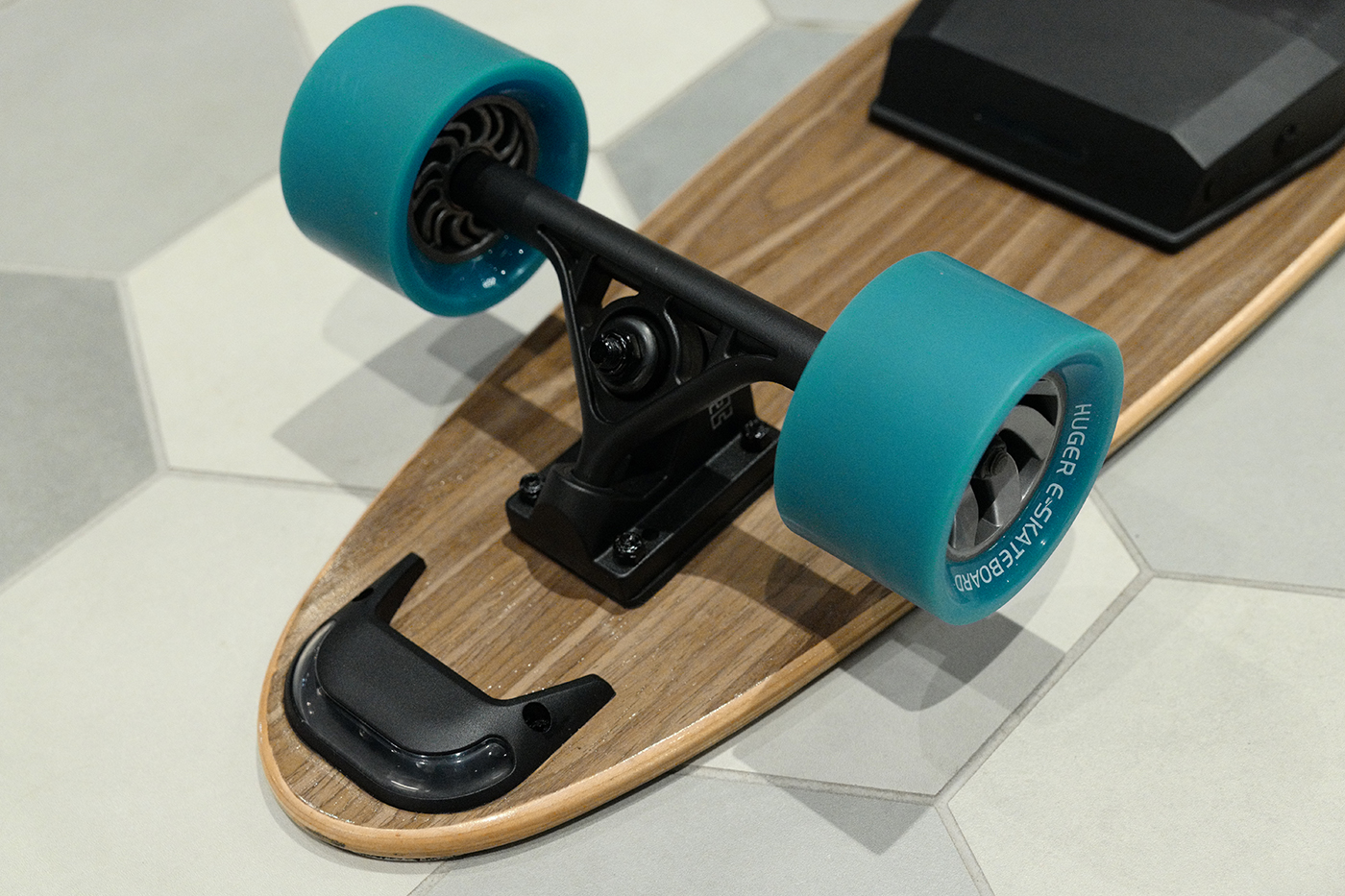 Huger Tech casts aside the long charging times by promoting the fact that you can quick-swap batteries ($199 each), but I can’t imagine myself carrying multiple packs in a backpack. By comparison, the Inboard and Boosted Board can both reach 85 percent charge in less than 45 minutes.

It’s tricky out here in the streets… 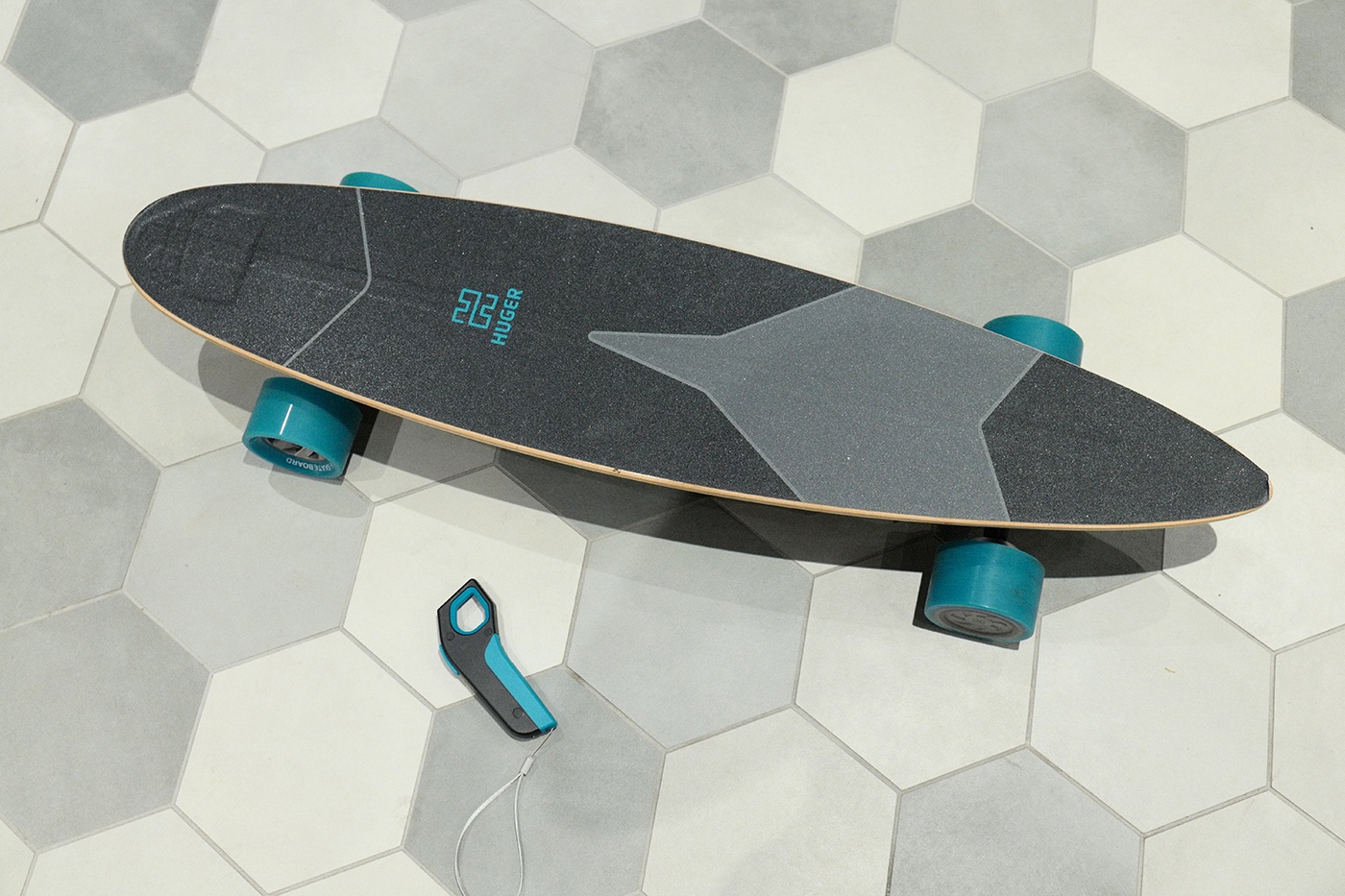 A great electric skateboard has three ingredients: smooth acceleration/breaking, a remote that fulfills the sensation of rider feedback and a reliable, secured wireless connection. The other bells and whistles are bonuses.

The Racer board only has one of those ingredients: a reliable connection.

From a standstill, it’s difficult to coast the Racer board up to its speed. It just takes off, even if you tame the torque down to 5 or 10 percent using the Huger Tech app. Meanwhile, you have to do a little dance to stay stable on the board.

Once you’re flying, it’s pretty awesome to go a full 3 mph faster than the best Boosted Board… until you need to come to a full stop.

At first, the braking experience is reminiscent of a hiccup: the board jolts back slightly, then steadily increases the breaking — all the while you get closer to hitting an obstacle. 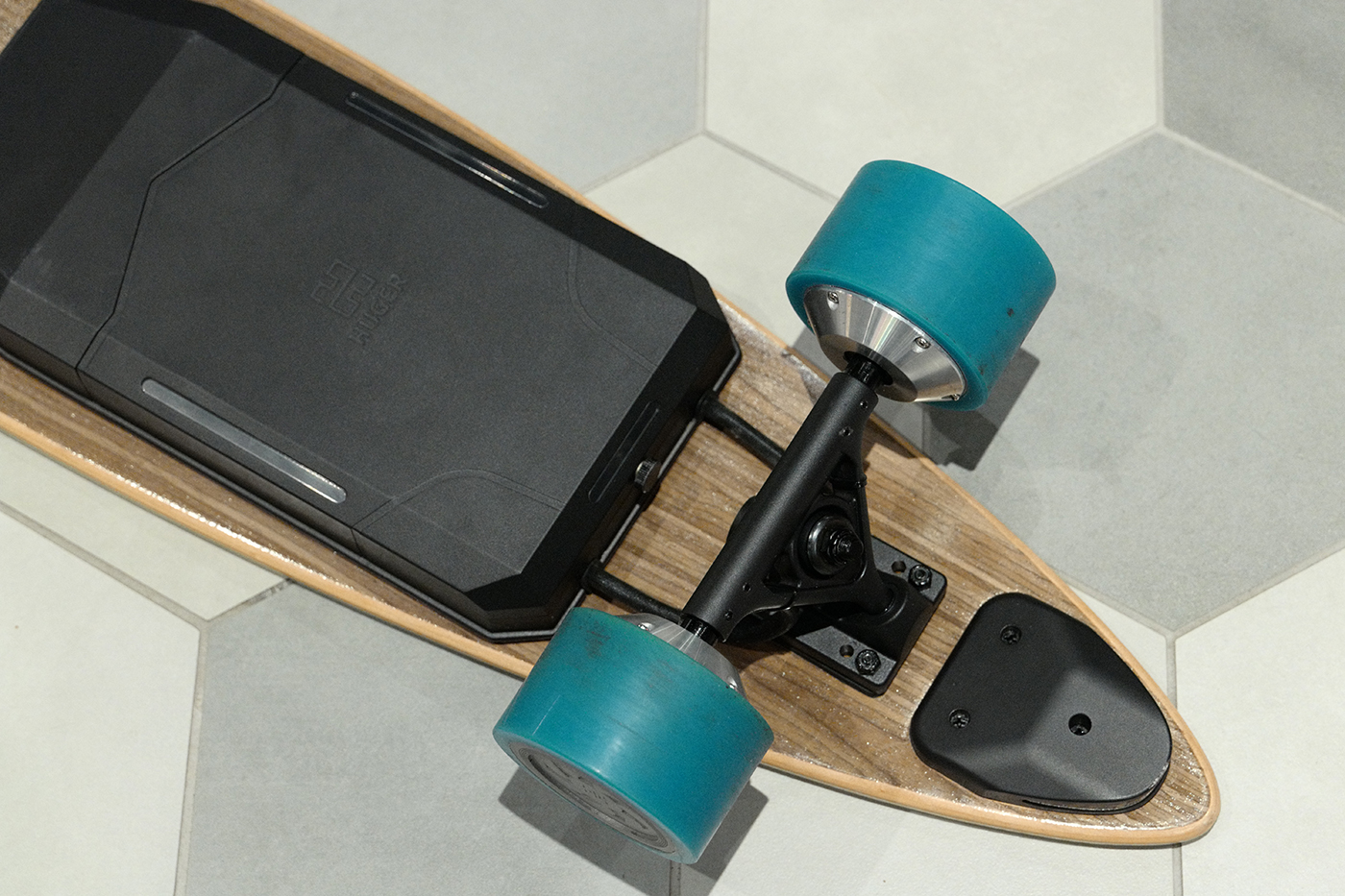 Another shortcoming of note is the construction material of the deck: Canadian maple. On a regular longboard, a solid and flat piece of wood is fine, but on a contraption that rolls through city streets at 25 mph, you’re only asking for a bumpy, hair-raising ride. That sums up most of my riding experience with it in SoHo. 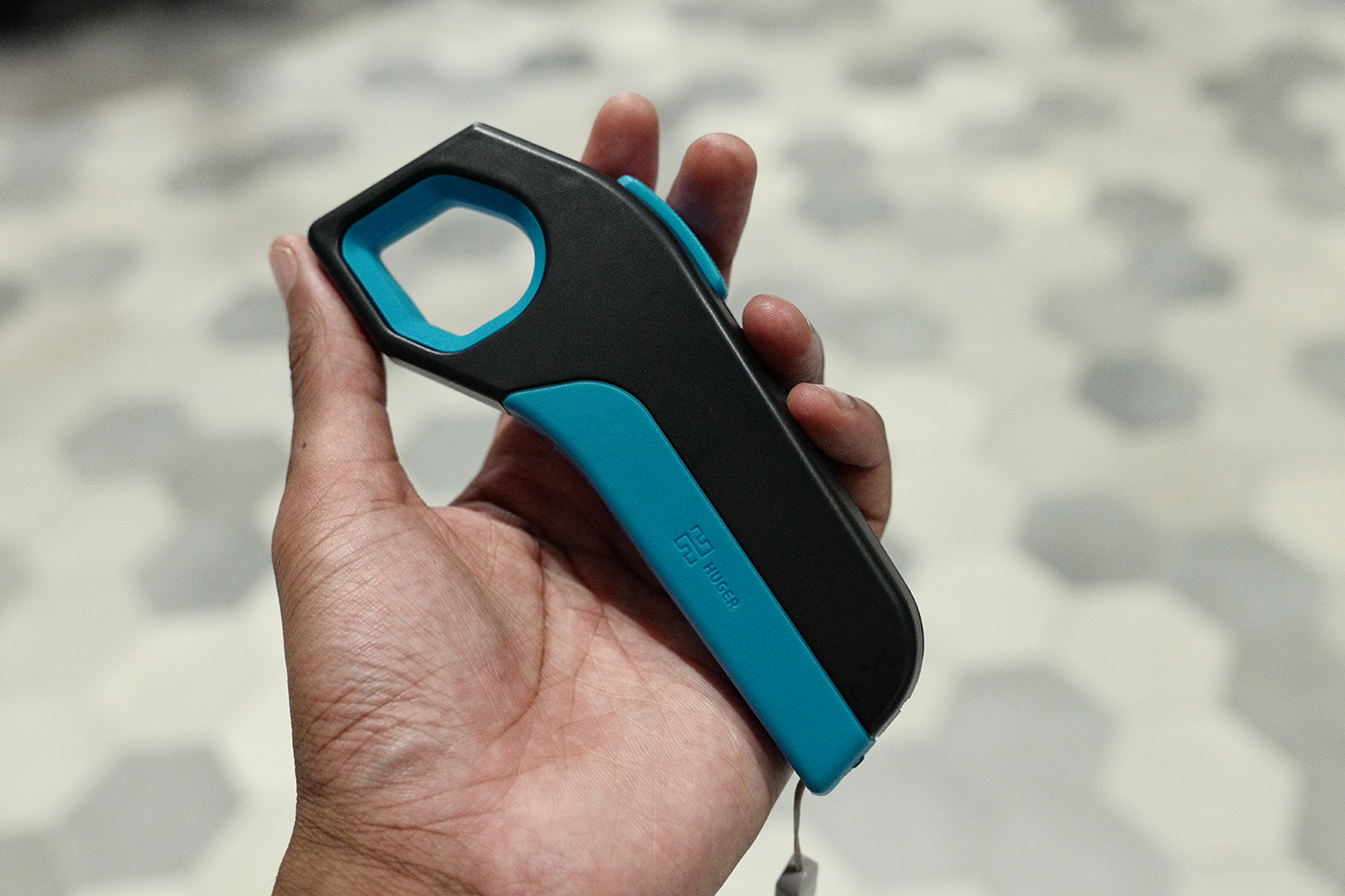 One of the things that stood out to me about the Racer board was the remote. It looks nice! It’s large but fits comfortably in the hand. Unlike the Boosted Board remote (the de facto standard), it has no safety switch to engage before you touch the acceleration slider. 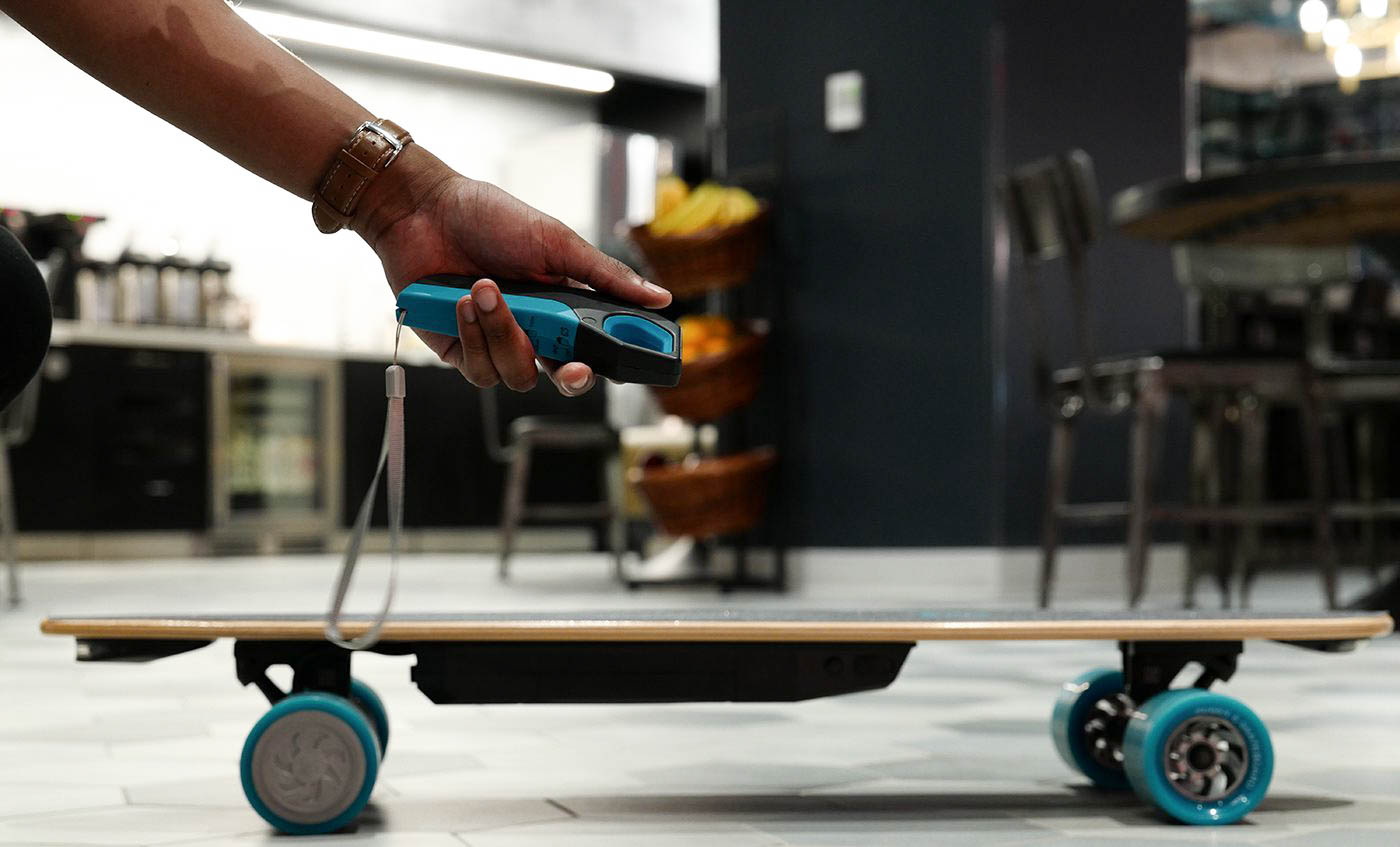 Speaking of which, there is no rider feedback (tension in the slider, a vibration motor or visual indicator), so unless you’re holding your phone in the other hand (which I don’t recommend), you have no idea what the remote is telling the board. 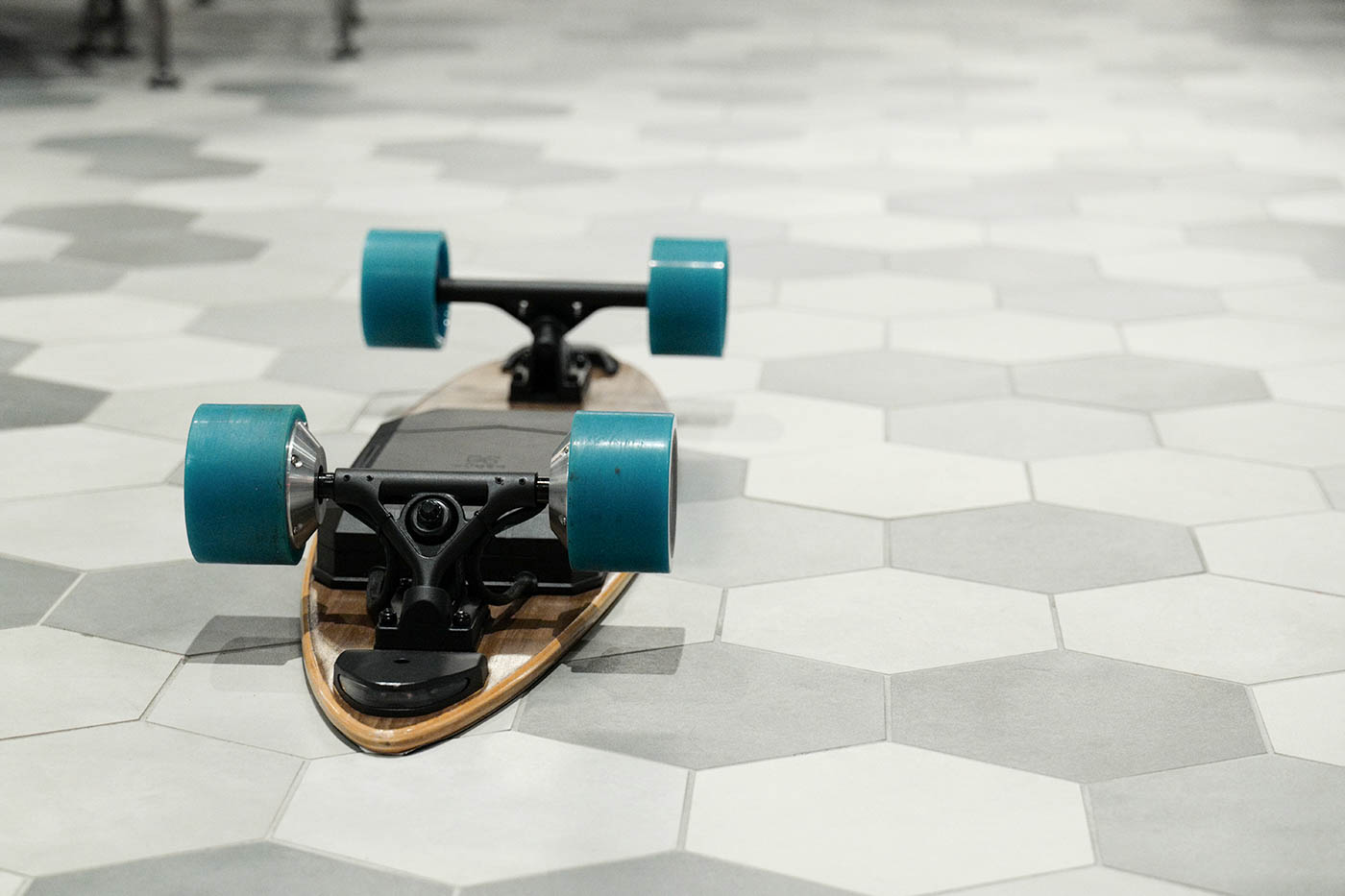 Once again, I’m unsatisfied with the riding experience. While the Racer board may be the most bang for you buck, none of that buys the rider confidence you find while on Inboard or Boosted’s models, which cost $1,400 and $1,500, respectively. Meanwhile, the Racer board will retail for $899 when it starts shipping worldwide in October.

Is a few hundred dollars off really worth the lack of refinement you want in a last-mile vehicle? Personally, I don’t think so, but electric skateboards as a whole are getting better.

The Racer is the most refined “budget board” I’ve tested thus far. With the right firmware/software tweaks it may turn out to be as rider-friendly as the Inboard, closing in on its spot for a fraction of the cost.

After all, slow and steady wins the race.

Price as reviewed: $899 at Huger Tech