Long the gold standard for bragging rights about your blazing broadband speeds, Speedtest.net has plenty of data to work with. Now, it wants to open up a new segment of that data to everyone, allowing users to compare aggregate speed reports from countries around the globe. The data will be compiled into a monthly report called the Speedtest Global Index, and the first one is available now.

The tool will offer 12 months of broadband and mobile speeds (both download and upload) for each individual country in the index. Ookla suggests that the stats could be used to “uncover trends and detect potential storylines” — given that the ride toward high speed global connectivity has plenty of bumps along the way, we’re inclined to agree. 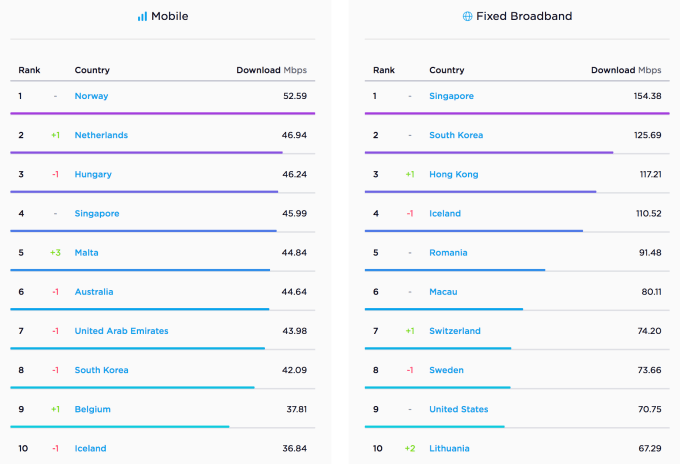 Perhaps more interesting than the static rankings themselves, the index includes stats on how countries are moving up or down the charts. For example, in July 2017, Japan dropped three points in broadband ranking to No. 13 while, the United States sat not-so-pretty at No. 9. Singapore continues to dominate global broadband speeds, while Norway offers the fastest mobile connections (the U.S. comes in at a pitiful No. 46 and dropping).

“We hope you’ll come to see Speedtest Global Index as a go-to resource for global internet performance data. Take this data and use it to tell stories that help make the internet faster in your home country and around the world,” Ookla’s blog post states.

“We’ll update Speedtest Global Index with data based on the previous month at the beginning of every month so you’ll have fresh statistics and an early eye on new developments.”