Fantasy sports, and probably to an even greater extent daily fantasy sports, can be intimidating. You’re usually playing for real money, and potentially going up against people who spend countless hours researching statistics to craft the perfect lineup.

Gameday, a startup part of Y Combinator’s Summer ’17 batch, wants to change this by making a few tweaks to daily fantasy sports so it can be accessible to everyone.

First, they’re building it into Messenger. This means you don’t have to visit a dedicated site each day and navigate a complicated UI – you just open Messenger and start chatting with their bot, which walks you through entering games and creating lineups.

It’s also totally free to play, which also cuts down on the intimidation factor and makes it fan (and family) friendly. Users can select real prizes like apparel and gift cards that can be bought with in-app currency awarded to contest winners.

And the last difference is that the games offered are simpler and designed to be more fun to play than traditional daily fantasy sports. For example, Gameday’s NFL contest has you pick just four players, one WR, TE, RB and QB from a pool of 10 players the startup selected that week. Picking four players from a pool of ten is infinitely less stressful than picking a lineup of 9 or 10 from a pool of hundreds.

Because if you’re just a casual sports fan, sometimes these complicated lineups and salary caps can be a little too daunting. And the big sites actually agree too, as FanDuel recently introduced a “lite” versions of a daily fantasy sports product designed for casual users.

You can play in random leagues or ones you create with your friends, and soon you’ll be able to play inside group Messenger chats, as soon as Facebook adds support for apps inside group chats.

Gameday also offers NBA, MLB, NHL and Premier League games – all with slightly different gameplay structures. Before the NHL season ended the startup had 25,000 people playing each day, with their 75% of those users never playing daily fantasy sports before…proving the concept that if you make a simpler game for casual fans they will come.

If you have Messenger installed, you can click here to start chatting with Gameday’s bot and playing. 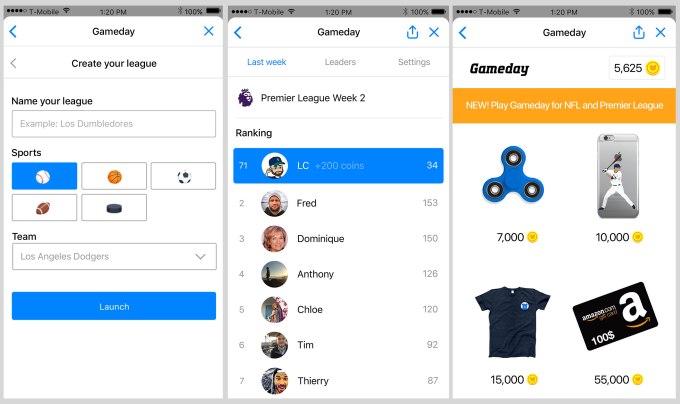