GoPro is flying high and mighty after releasing its 2017 second-quarter earnings. The camera company took in $297 million in revenue equaling a non-GAAP loss of 9 cents per share. This was way above Wall Street’s expectations, as the general consensus was that GoPro would report revenue of $269 million with a loss of 25 cents per share.

That’s growth any way you slice it, and equals a 34 percent year-over-year growth in revenue.

GoPro’s stock is now up nearly 15 percent on the news, trading after hours around $9.30. This is the highest the stock has traded since February, which is when it tanked 10 percent after missing Q4 2016 earning expectations. 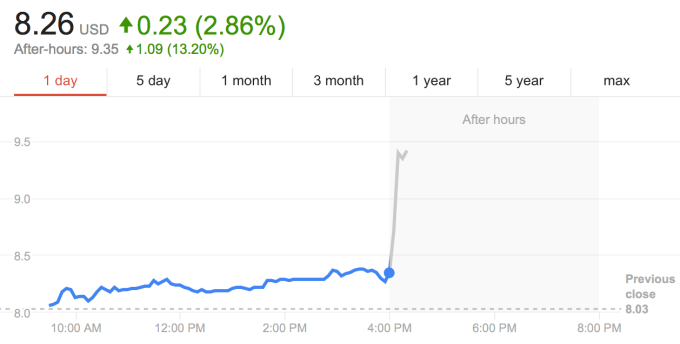 Of course, there’s still a long way for the company to go if it wants to make investors happy again. GoPro once traded at almost $87 a share back in 2014, but a string of performance and supply chain issues, in addition to generally poor software quality, has dragged the company, and its market cap, down significantly.

But the company seems committed to fixing these issues. Specifically, GoPro said that this quarter saw a 39 percent reduction in inventory from last quarter, and forward weeks of supply in their channel is down 25 percent. The fact that the company is getting a better grip on supply chain management sets them up well to release products in the future without wasting extra cash on old inventory.

In terms of sales, GoPro gave some stats about how its cameras sold during Amazon Prime Day. The company said the HERO5 Black was offered with no discount, but saw a typical week’s worth of sales in just that one day.

It also said that its mobile video editing app, which the company sees as a major key to the future, was installed 5.6 million times in the second quarter, and that monthly active uses were up 112 percent year-over-year.

And the once-cursed Karma Drone? GoPro says it was the No. 2 selling drone brand in the U.S. in the second quarter, according to NPD Group’s Retail Tracking Service. Of course, this isn’t a huge shock, since after DJI there really is no other major player in the drone space. And the fact that GoPro didn’t disclose any specific sales numbers for the Karma means the drone may still be selling fewer units than the company wants. But it’s definitely at least a start, and investors should be pleased to see the company is still trying to make the drone business work.

GoPro seems to have survived again this go around, but investors are going to be looking for long-term direction going forward. We will be listening in to the company’s earnings call and will add more details when we obtain them.