Facebook will become the suggester of perspective to avoid being the “arbiter of truth”. It’s rolling out “Related Articles” that appear below news links to stories lots of people are posting about on Facebook, or that are suspected to be false news and have been externally fact checked by Facebook’s partners. Appearing before someone reads, Related Articles will surface links to additional reporting on the same topic to provide different view points, and to truthiness reports from the fact checkers.

If users see drastically different angles when they compare a story to its Related Articles, they might deem it suspicious and skip it, be less likely to believe or share it, or could click through the Related Articles and make up their own mind. That could reduce the spread and impact of false news without Facebook itself having to be the honesty police. Related Articles could also balance out some of the radical invective that can subtly polarize the populace.

Pre-click Related Articles are rolling out in the US, Germany, France, and Nederlands today. These countries were chosen to get the roll out first because Facebook has established fact checking partnerships there. “We don’t want to be and are not the arbiters of the truth. The fact checkers can give the signal of whether a story is true or false” says Facebook News Feed integrity product manager Tessa Lyons.

Meanwhile, Facebook’s machine learning algorithm has improved its accuracy and speed, so the social network  will now have it send more potential hoaxes to fact checkers. Lyons explains that the speed is important because “The sooner we can get potential false new stories to fact checkers, the sooner that they can review them, and the more we reduce the number of people who are actually exposed to them.”

Facebook has shown Related Articles after people click links since at least 2014. Even then it was getting flack for dispensing fake news. In April of this year Facebook tested the new pre-click version as part of its multi-prong attack on fake news following criticism that misinformation influenced the 2016 U.S. presidential election. That includes downranking hoaxes and click bait, reducing referral traffic to ad-filled spam sites to cut off their funding, and promoting local journalism and news literacy. Most directly, it partnered with Snopes, AP, PolitiFact and others external agencies so it can add warning labels to stories externally vetted as false.

“People told us that Related Articles gave them more context about topics and that having more context helps them make more informed decisions and about what they read and what they decide to share” Lyons tells me. “Seeing Fact Checker’s articles in Related Articles actually helps people identify whether what they’re reading is misleading or false.” 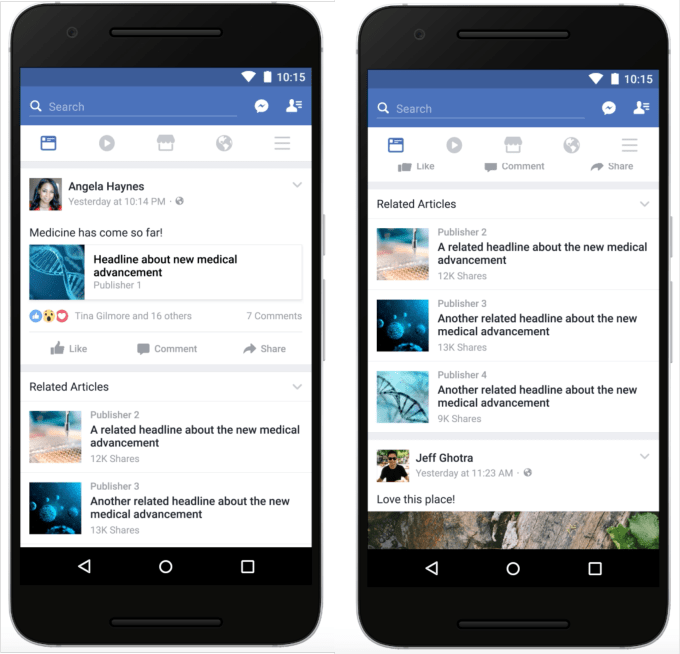 Facebook won’t be personalizing the Related Articles that show a column of thumbnail images and headlines below a link story. However, it does utilize other quality signals from News Feed ranking to show the optimal alternative takes. Thankfully, Lyons says Facebook doesn’t plan to put any ads in the Related Articles box.

So how does Facebook avoid accidentally showing more fake news in Related Articles? Facebook tells me it uses the same signals as its Trending section, and disqualifies posts that lots of people are commenting on or reporting as false. No humans are involved in the process, which at least removes the potential for direct bias, though humans tend to code their subconscious biases into their algorithms.

If Facebook can’t convince the world it’s got a real handle on the fake news problem, it may see people tune into the News Feed or click its links less. That interferes with Facebook’s ad-driven business model and its mission. Plus, it’s liable to get blamed for future election results.

While objectively fake news gets the majority of the attention, it’s exaggeration and warped opinion that are much more prevalent and therefore potentially polarizing. If extreme right and left publishers’ articles get paired with centrist Related Articles, it could dissuade people from blindly swallowing the rants and raves that tear society apart.