Game developer Chip Sineni of TRIXI studios created a clever AR experiment based on A-Ha’s seminal video for Take On Me. It is pretty fun. It’s also garnering a lot of attention from some very specific folks. I have been talking to a lot of people about AR over the past few months and there is a definable excitement around it.

I’m bullish as hell about AR, which I’ve covered before. I even wrote in 2013 about when and why this was coming to phones (get ready for that new iPhone btw). Now, the space is what you could refer to as ‘frothy’ if you were living in 2009.

The immediacy and visual nature of AR, plus the 300+ million (could be a billion depending on how you count it) actionable endpoints that are coming online when Apple launches ARKit officially in September, has investors engaging the Thirst Machine. They are racking up the daily active thirsts. Etc. 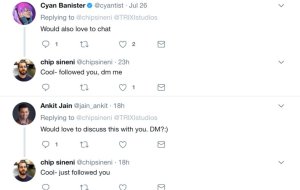 Nowhere is this more visible than Twitter, where every AR experiment post from a developer in the community features a rapid fire response trail of interested parties. Check out the follow list of accounts like @madewitharkit for more evidence. There is a very nebulous feeling in the air about just how Big or Important AR is going to be and people are out fact finding.

Including me. Hit me up, I’m thirsty.

Credit to Mannes for the screenshot