In VR, we’re all robots, but some experiences make that a bit more apparent than others.

Today, Oculus is releasing a VR comedy called “Miyubi.” The experience, produced by Funny or Die and Felix & Paul Studios, is the longest VR narrative to be funded by Oculus to date, clocking in at around 40 minutes.

“We looked at this like we were making half of a low-budget indie film,” said Ryan Horrigan, chief content officer at Felix & Paul Studios.

Throughout the film, you are looking through the eyes of Miyubi, a Japanese toy robot (that seems to have about as much AI intelligence as Siri), which is brought into a middle-America family home circa-1982 by a father who picks it up as a birthday present for his son.

Miyubi becomes part of the family. He’s at the little sister’s tea parties, he’s with the older brother smoking joints, he’s being kidnapped by grandpa who spends much of the film suspecting that Miyubi is a Japanese super weapon. The storyline evolves through a series of episodic memories that generally end with Miyubi’s batteries running out or his software crashing.

In keeping with the comedy style present in a lot of Funny or Die’s stuff, “Miyubi” is a lot more about nostalgia than gut-busting laughs, but it still comes across as a very thoughtful adoption of VR as a medium, even if the 80s-drenched storyline relies a bit too heavily on John Hughes-era tropes, given how long it is.

There are some interesting narrative techniques present in the film, the most curious of which involves an instance where you can see yourself as Miyubi on the TV with the mirror image giving live movement feedback, further sucking you into the moment. Also interesting is an in-film discovery game where you are tasked with discovering secret objects that will eventually lead you to a memory sunk deep in your robo-subconscious, where you can listen to your creator, played by none other than Jeff Goldblum. 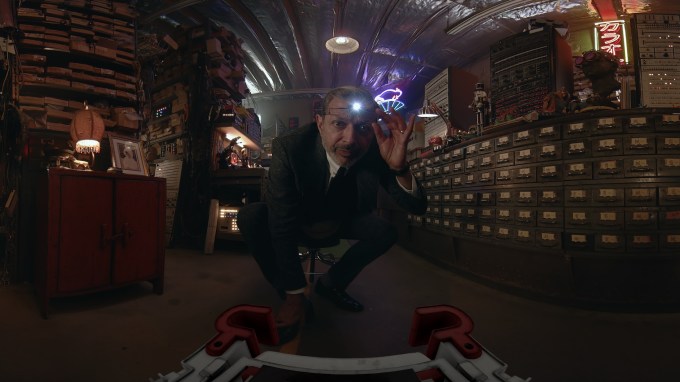 As VR studios like Felix & Paul continue to experiment with storytelling techniques, the products are slowly earning their stripes as content that stand out on their own, outside of a reliance on the VR gimmick.

In May, Oculus shuttered its in-house VR-creation house Oculus Story Studio, with the stated goal of shifting the resources toward investment in outside content. As part of that move, Oculus’s content head announced they’d be shifting $50 million of Facebook’s $250 million VR content funding budget specifically toward funding non-gaming experiences.

“In the post-Story Studio world we have more bandwidth and funding,” Colum Slevin, head of experiences at Oculus, told me. Slevin estimates his group has about 30-40 projects ongoing through 2017, about half of which are narrative-based.

Miyubi is available for free download now on the Oculus Store for Gear VR and Rift.