Ebay this morning announced its plans to introduce new image search capabilities that will allow the company to better compete with the likes of Pinterest, Google and Amazon, all of which already support the use of photos in order to connect online shoppers with products of interest. There are two parts to eBay’s implementation of visual search: Image Search and Find It on eBay.

With Image Search, eBay users can snap a photo with their phone or upload one from their camera roll to find listings on the site that match the item in the photo. The other, Find It on eBay, is a feature in the eBay app and on the mobile website which allows you to share images you find on the web, including on social media, and then “share” that image into eBay to find related listings.

The company says the two new offerings were developed using artificial intelligence and machine learning technologies that eBay already has embedded in its site. For shoppers, what this means is that the more people turn to image search to discover products across eBay’s catalog of over 1.1 billion items, the more the results will improve. 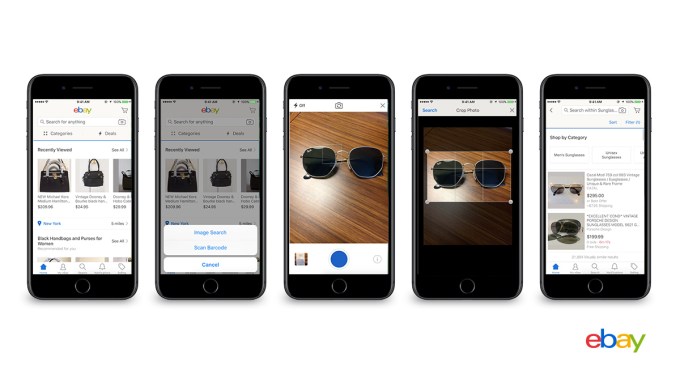 Ebay also notes that the size of its catalog and age of its service could give it an advantage in this space.

“…eBay is at a technological advantage due to the rich set of user-generated images and item data we’ve accumulated through the years,” noted Mohan Patt, VP of eBay’s Buyer Experience, in a statement about the launch. “By applying machine learning technology, eBay can deliver a fast and reliable shopping experience backed by one of the world’s largest commerce data sets.”

The company is not without its competition, however. Amazon’s existing mobile app lets users shop using photos they snap with their phone’s camera, or via barcodes they scan, while Google more recently took on Pinterest’s visual search feature with its April introduction of a fashion image search feature that could surface apparel, in addition to the handbags, sunglasses, and shoes, it already handled. And of course, Google has had a search-by-image feature for years that goes beyond finding products.

Meanwhile, Pinterest touted in February how its visual discovery engine connects 150 million users worldwide with the 100 billion “ideas” they’ve saved to its site.

Of course, not all of Pinterest’s saved images are those for products, unlike on eBay. 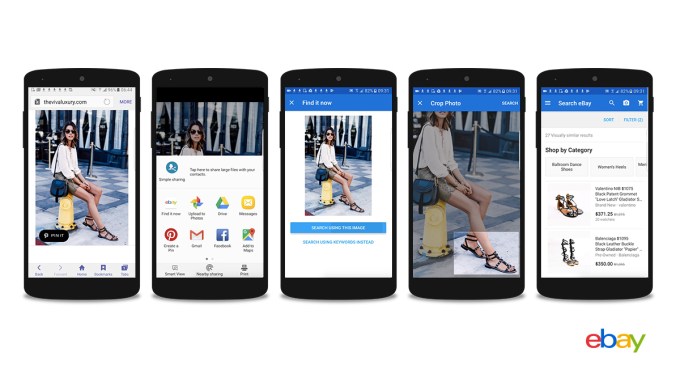 Above: Find It on eBay

Other e-commerce businesses are rolling out visual search functionality of their own, developed for their particular vertical. For example, home furnishings site Wayfair introduced a visual search engine this May, which can help users find sofas, chairs, tables and other furniture they like.

Ebay is a bit late to the game in terms of putting a fully featured visual search tool directly into consumers’ hands through its flagship mobile app and mobile website. However, it’s not the first time it has leveraged image recognition technology in some capacity. Last fall, for example, eBay introduced a high-end furniture shop on its site called eBay Collective, which used a visual search engine that leveraged technology from its acquisition of visual search company Corrigon.

The company also experimented with a very similar search-by-photo technology with the launch of its Messenger app, ShopBot last year. While the bot overall wasn’t all that useful, you could see where eBay was going with the visual search feature – users could simply upload a photo of something they like, then ShopBot would return related results from eBay’s listings.

Neither of the two newly announced visual search features are available today, so they can’t be tested and reviewed at this point.