Building blocks are a fascination that most people eventually outgrow. Not Noel Maxam, an Emmy-award-winning producer, director and writer who more recently leapt into the world of modular construction with Emagispace, a company that’s looking to give stick-frame construction the brush.

Because the LA outfit just raised $4.2 million in Series A funding led by Alpha Edison — with participation from Circle Ventures, United Talent Agency CEO Jeremy Zimmer, 54 Madison and others — we thought we should talk with Maxam about his interesting career arc, and what he’s planning to build with Emagispace. Our conversation has been edited for length.

TC: You’d gone to film school and were producing daytime soap operas when the idea of Emagispace came to you. What happened?

NM: One of the things I was doing in my job was looking at line items: how much it takes to build and install and store sets, which is an incredibly difficult process. You’re moving around irregular sizes and weights. At some point, I decided to apply for a patent. After that, things just snowballed. I partnered with an MIT engineer to create this building product with a life cycle. I wanted it to be sustainable and regular-sized. I wanted to be able to configure a wall that could be taken down by one person and that would never need to be “broken” or thrown out entirely. I wanted to be able to apply a different “skin” or wall covering that was separate from the blocks themselves.

Basically, I wanted something that was sustainable, reusable, could be repurposed and that could be recycled, once someone is done with it.

TC: What are these modules made of?

NM: The product is medium-density fiberboard panels that are made of sawdust, wood chips and recycled newspaper, and we use lightweight ABS plastic interlocking blocks to connect them.

TC: I understand that Sony and Maker Studios are using them for their movie and show sets. What are some of the other ways that customers are using them?

NM: They’re being used in office build-outs, commercial retail, trade shows, rock concerts, college theaters, convention halls, in living spaces, for disaster relief by NGOs that are using them for shelter. There’s really no difference between our product and a standard wall, and because you can build it up and take it down and re-use it, the cost savings multiply over time. Some Emagiblocks have already been in use for more than two years. 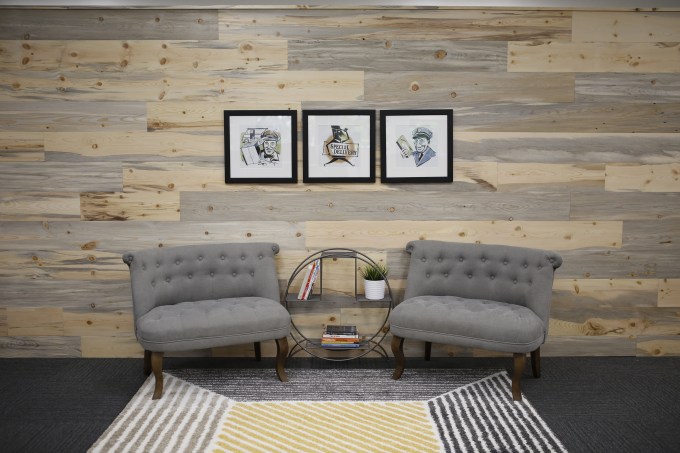 TC: How much do the blocks cost?

NM: The list price is $15.50 per square foot, though we make deals based on volume.

TC: How many employees do you have, and what’s the sales process? Do people need to see and feel these blocks typically?

NM: We have 12 full-time employees — including sales reps in New York, LA, Seattle, Atlanta, Denver, Dallas and Calgary — though I just interviewed four more people. It does make a difference when you’re able to touch and see it. We have two offerings, too: the raw Emagiblock, for people who want to do their own build-out and use their own decorations; we also have customers who want the blocks to come together easily to create maybe an accent wall or a phone booth that people can use as private meeting rooms.

TC: Where are the blocks manufactured?

NM: In Minneapolis and Denver. With a lot of business models, you have to build the manufacturing capability yourself, but we rely on virtual manufacturing, meaning I can turn to someone with a [computer controlled cutting machine] and buy his or her machine time, so I don’t have to buy my own; that means I can expand and contract my manufacturing very quickly.

TC: That seems fitting, given your product. Who do you consider your most direct competitors?

TC: There are other modular wall companies.

NM: No one can touch our price point.