One-third of all link clicks on Facebook already go to its self-hosted Instant Articles. Facebook claims they drive more referral traffic click-for-click because people don’t abandon them mid-click as they do with slow-loading mobile websites. Now Facebook is teaming up with Nielsen to prove that individual publishers benefit when they post with the Instant Articles format. 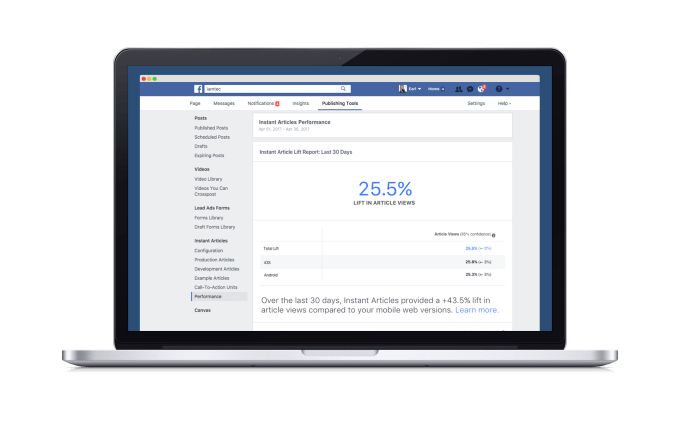 Facebook says that, on average, here’s how much more people click and read Instant Articles over mobile web in different parts of the world:

That leaves out of whether these Instant Articles monetize better. That’s something that publishers are increasingly worried about — and with good reason.

Facebook launched Instant Articles in 2015 with a sterilized style, tons of restrictions on how many ads they could show and no way to include subscription purchase, newsletter sign-up or recirculation units that drive revenue. That year, I warned publishers they risked becoming ghostwriters feeding dumb content into Facebook’s smart pipe, with no differentiation between publishers or opportunities to build long-term relationships with loyal readers. You can watch my rant about the problem below.

Recently, Facebook has been working to fix some of those problems. It let publishers start showing more ads, introduced Page Like and email sign-up buttons and is now testing recirculation units so news outlets can drive readers from one article to another. Facebook plans to start testing a paid subscription paywall feature in the fall.

Still, the News Media Alliance representing 2,000 newspapers, including The New York Times and The Wall Street Journal, recently asked Congress for anti-trust exemption so they could collectively bargain with Facebook and Google over who gets ad revenue. Money that used to go to buy ads on publishers’ sites is rolling up to the content aggregators through which people find their news. That threatens to defund newsrooms in favor of social and search platforms.

With the new tool, publishers should be able to compare the referral traffic and their monetization of Instant Articles versus mobile web, and see which ends up making them more money overall. That could inform them about whether Instant Articles are a deal with the devil or a match made in heaven.