Venture investment in U.S. startups rose sequentially in the second quarter of 2017, boosted by large, late-stage financings and a few outsized early-stage rounds in tech and healthcare.

Overall, Crunchbase projects that U.S. startups raised $22.7 billion across all stages, from seed through technology growth rounds. That’s up from $20.6 billion in Q1, which is typically a slightly slower quarter, and about flat with year-ago levels.

So far, several of those recently public companies have failed to match their private market valuations. However, that did not seem to put a damper on late-stage deals and unicorn financings. 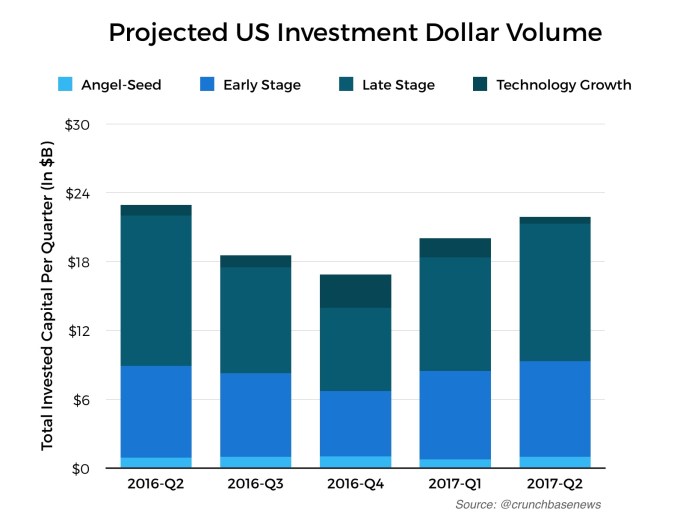 Round counts give an idea of whether investors are consolidating around fewer companies or spreading their bets across more startups. For Q2, we’re projecting that 2,329 startups raised investments. Overall, projected round counts are about flat with Q1 and down some from year-ago levels.

The trends diverged a bit when looking at each stage. Late-stage round counts were up year-over-year, while seed and early-stage declined. Projected seed round counts are down 16 percent from year-ago levels. That’s significant, as seed accounts for more than half of all rounds. Moreover, a reduction in seed-stage deals could indicate higher odds for an investment slowdown ahead, as VCs rely on a robust pipeline of seed-backed companies for Series A and late-stage rounds.

In the chart below, we look at round counts for the quarter: 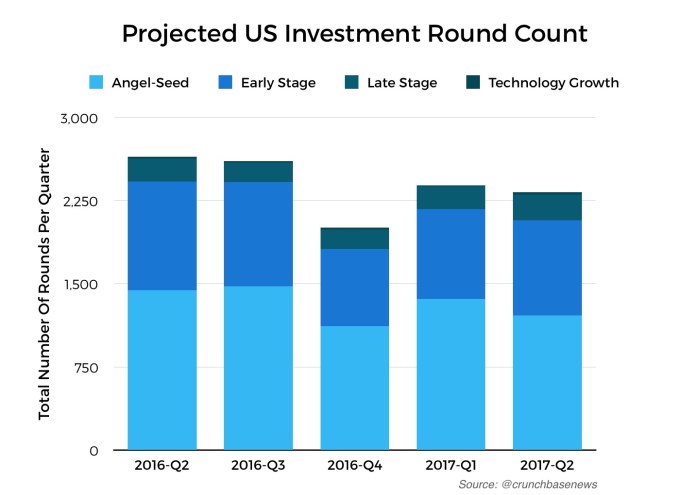 Crunchbase projects that investors put $8.3 billion in Series A and B rounds during Q2, up from $7.7 billion in Q1. The Q2 results were buoyed by a handful of large healthcare-focused rounds, with Outcome Health, a provider of digital medical content, closing the largest investment, a $500 million Series A at a $5 billion valuation. (Outcome, however, is not a typical early-stage deal. The company was founded in 2006.)

Of the five largest early-stage rounds, just one, mobile phone and home device developer Essential, is not related to healthcare.

In the chart below, we look at the largest Series A and B funding rounds for the quarter:

Late-stage and technology-growth financing held up at high levels in Q2. Overall, Crunchbase projects total Q2 funding of $12.6 billion late-stage and growth, up from $11.6 billion in Q1 and down a bit from $14 billion in the year-ago period.

Familiar names topped the list of biggest funding recipients, including Uber rival Lyft, which raised $600 million, and home décor site Houzz, which closed on $400 million. In the chart below, we look at five of the largest late-stage financings:

The quarter ended on a less optimistic note, however, with companies slashing offering sizes and making debuts to tepid market demand. Meal kit delivery service Blue Apron and cloud storage provider Tintri cut their expected share price before going public and have seen no bump in aftermarket trading. Both companies are now valued far lower on public markets than they were in private funding rounds. Cloudera, which provides data management technology, is also trading far below its private market valuation.

In the chart below, we look at U.S. venture-backed companies that went public in Q2: 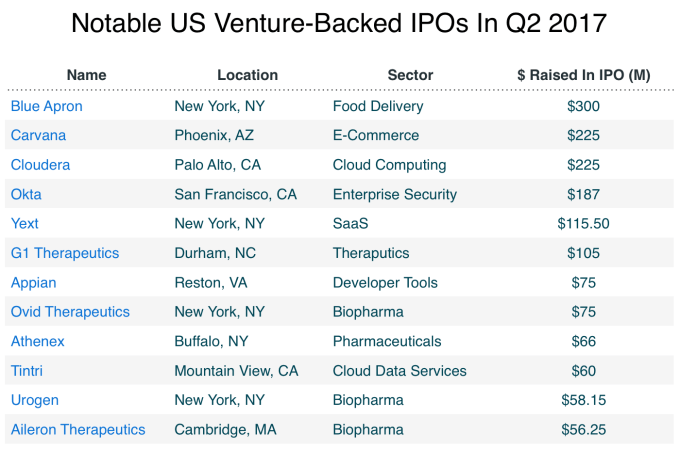 The just-ended quarter wasn’t a particularly busy period for large acquisitions, but a few big deals did get announced. Quarter-over-quarter, the value of disclosed, venture-backed acquisitions fell in Q2 of 2017 from Q1 levels. The drop is largely due to the absence of multi-billion-dollar deals.

The largest Q2 M&A deal was likely Oracle’s purchase of Moat, a provider of digital media measurement analytics, for a reported $850 million. (Oracle has not confirmed the purchase price.)

Other significant deals include Cisco’s $610 million acquisition of virtualization technology provider Viptela and Walmart’s $310 million purchase of online clothing retailer Bonobos. But while those deals are sizeable, none approaches the magnitude of Q1’s largest deal: Cisco’s $3.7 billion purchase of AppDynamics.

A single slow quarter for tech M&A does not necessarily signal a shift in market conditions. Multi-billion-dollar acquisitions of private, venture-backed companies are infrequent, so we don’t see them every quarter. Even so, it’s clear Q2 of 2017 wasn’t a great quarter for generating venture returns from acquisitions.

In the chart below, we look at the largest deals of the second quarter:

Overall, we can say venture investment levels have not fallen off a cliff in Q2.

However, many of the headwinds we are seeing could bring storm clouds. A declining number of seed-stage deals could point to a slowdown in early- and late-stage funding activity in subsequent quarters. The disappointing IPOs of venture-backed unicorns like Blue Apron, Cloudera and Tintri could also stifle enthusiasm at the very later stages. Investors may grow wary of assigning high valuations in private rounds that may not be sustained on public markets.

We haven’t seen a big unicorn pullback yet, with capital continuing to pour into mega-rounds for Lyft, Houzz and others in Q2. However, as the number of richly valued startups swells, a growing concern on backers’ minds has been whether these companies will be able to sustain public valuations near or above private-round levels. Lately, the answer from public investors has been “sometimes.”