Microsoft today unveiled a redesigned version of its popular Outlook mobile app for iOS and Android, which most notably includes a more intelligent search feature, powered by Microsoft Graph, along with other changes to navigation and conversations.

Microsoft Graph, the company’s technology used to make productivity applications smarter, is being used to turn Outlook’s search feature into a tool that can surface more than just emails – it will be augmented to include things like contacts, attachments, flight and travel itineraries, package deliveries and more.

Search is also becoming a more central part of the experience in the new version of Outlook, Microsoft notes. In fact, when you tap into search it won’t be a blank screen, but will include proactive suggestions of your top contacts and recent files, as well as showcase things happening ‘today,’ like your travel plans – all before you even kick off your search. 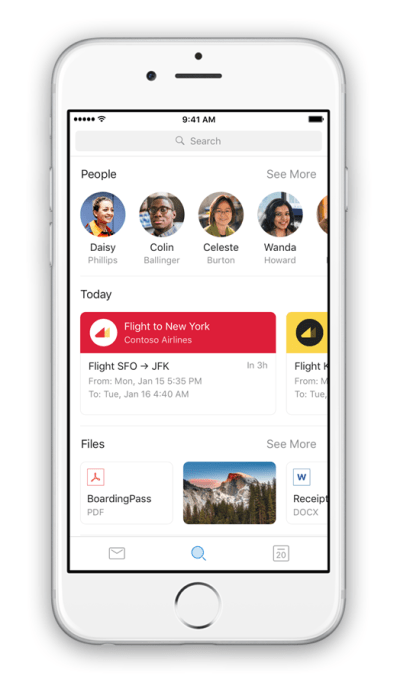 Plus, when you start typing, the auto-complete suggestions will display names from your most frequently contacted recipients first.

Unfortunately, this intelligent search upgrade – while a part of the larger Outlook makeover – isn’t immediately available. Instead, the update will roll out “soon” to mobile users, says Microsoft, though it did not give an exact launch date.

However, there are a few more changes that are beginning to roll out today.

For starters, the conversation experience has been redesigned. There’s now a clear separation between individual emails, which is a plus, as it makes it easier to visually parse your group conversations and get caught up. Also, Outlook will now automatically open conversations to the first unread message, to save you on scrolling down. 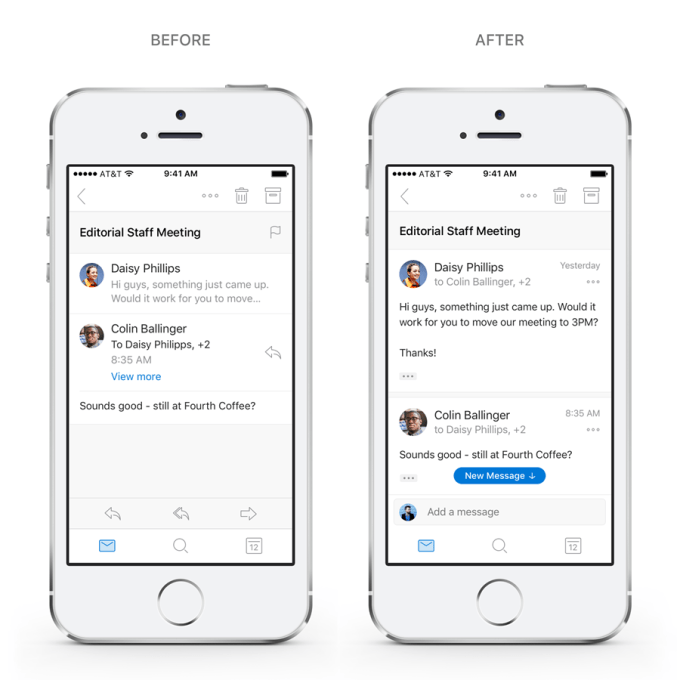 And instead of having to tap an arrow to reply to the group, there’s a Quick Reply box at the bottom into which you can type your message, then hit Send when done. This makes it easier to view the previous emails on screen while you’re typing your response, which is handy, too.

You can still do other things like forward emails or edit the recipients list, but these functions are tucked away in the updated interface.

Outlook’s navigation has been improved, as well, with a focus on making it simpler to switch between multiple email accounts and browse their associated folders. This has been accomplished by moving the account list further off to the left side, and using round icons for the various services to represent your different email accounts. 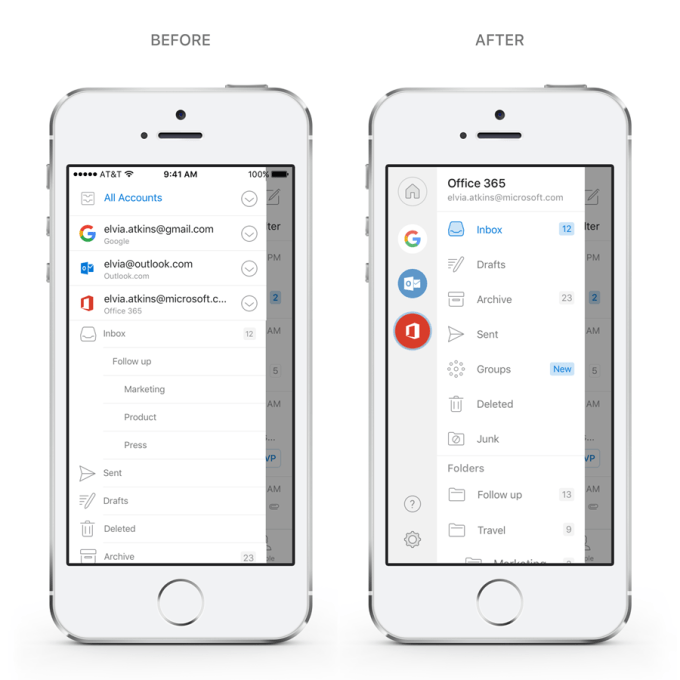 This could get tricky, though, for those with multiple accounts from the same email provider. But the advantage is that as soon as you tap on the account you want, the folder structure immediately appears in the navigation, along with other key folders like Inbox, Drafts, and Groups.

The changes to conversations and the navigation are starting to roll out today to Outlook for iOS users with Outlook.com and Gmail accounts, with support for Office 365 accounts coming in the days ahead. iOS will also “soon” have access to the smart search feature, says Microsoft.

Android users, meanwhile, will have to wait a couple of months to receive the updates.