After helping to launch the Partnership on AI with Google, Facebook and others; and doubling down on AI research, today Microsoft unveiled a new initiative that points to how it plans to target specific verticals in what can potentially be a very nebulous field — while also raising the public image of AI as some grow concerned about the implications of its encroaching influence.

Today, the company announced AI for Earth, a new program that will be dedicated to AI-based projects in the areas of agriculture, water, biodiversity and climate change, where Microsoft proposes to donate up to $2 million in Microsoft tools, services and training for projects to help them get a leg up. It will be led by Microsoft Chief Environmental Scientist Lucas Joppa.

AI for Earth will not include money grants as such — although as recent investments from Microsoft Ventures show (and also its acquisitions), the company is also willing to put money where its mouth is, and to take equity in the most interesting projects, too. This program could help create a funnel to identify and follow some of the more interesting projects (and get them using Microsoft services to boot).

The news is being announced at an event in London this morning highlighting Microsoft’s progress in AI research in the UK and beyond. The event was led by Harry Shum, Microsoft’s EVP of its AI and Research Group, along with Emma Williams, GM of Bing Studio; Chris Bishop, Distinguished Scientist and Laboratory Director at Microsoft Research Cambridge; and Eric Horvitz, technical fellow and director of Microsoft Research Labs. 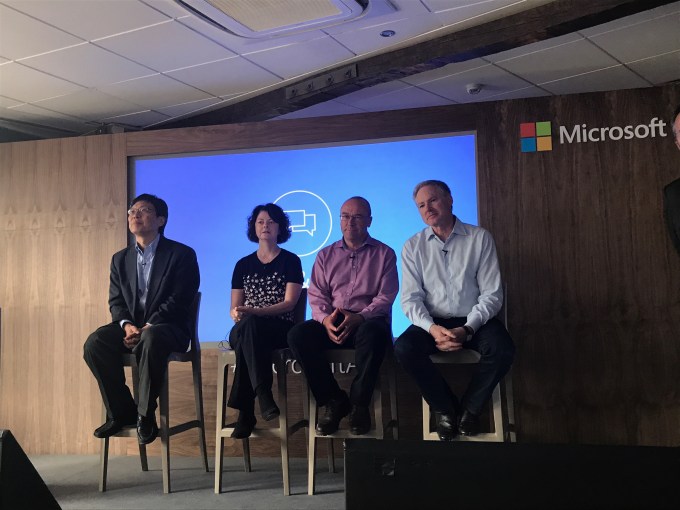 Microsoft’s R&D labs in Cambridge, UK (the first Microsoft set up outside of the US) are 20 years old this year, and Microsoft is unveiling some other new programs in the area — including a new Microsoft Research AI group; a new “Aether Advisory Panel” (an acronym for “AI and Ethics in Engineering and Research”) that will report directly to senior management; a new partnership with the Amsterdam Machine Learning Lab; and a few new experimental products that are using AI, such as a new PowerPoint Presentation Translator.

A lot of AI applications are being created to replace or improve IT services that already exist — for example, see Gong.io, an AI-based platform that helps improve sales conversions; or AI-based cybersecurity services; or robots for factories. The idea behind AI for Earth is a little different. Microsoft is looking for projects that are using AI to find solutions to problems that have yet to be solved.

This is an interesting and important twist on the AI challenge: many worry about how AI will replace humans, and/or will quietly help evade ethical and privacy oversights — “societal angst” as Microsoft’s Emma Williams, the GM of Bing Studio and its “EQ Expert”, put it (EQ: emotional quotient).

The AI for Earth program, in that regard, has a few of purposes: not just to get closer to startups that Microsoft might want to acquire or invest in the AI field and to get those startups and organizations to build on Microsoft platforms; but also to help Microsoft position itself as a responsible player in this space who wants to use AI for wider and sustainable benefits. “We are committed to a very principled approach to AI,” Williams said today.

“It comes down to a question of trust, between organisations but also with patients,” noted Bishop, in reference to one of the recent controversies in AI, where Alphabet’s DeepMind is working with the NHS, a project that was found to have violated privacy rules.

Microsoft said that the $2 million amount in AI for Earth will cover access to Azure and Microsoft’s data science “virtual machine”; and it will also help organizations get access to more direct financial help in the form of grants.

Up to now there have been three projects that have quietly received help from the AI for Earth initiative, ahead of Microsoft giving the program a stronger push.

They include a collaboration with Esri to work with five organisations focused on high-resolution land cover mapping, and building a lower-cost mapping tool to analyze, monitor and manage natural resources.

Microsoft has also been working with the University of Pittsburgh, Johns Hopkins University, University of California Riverside, and Vanderbilt University on something it describes as “Project Premonition” to detect pathogens by using mosquitos into “devices that collect data”, which is also being used for biodiversity research.

The third project is agricultural. In India the company is working with the International Crops Research Institute for the Semi-Arid Tropics (ICRISAT), which is a UN agency; and the local government in Andhra Pradesh “to enable data-driven farming for improving agricultural yield, reducing the cost of farming, and limiting the impact of agriculture on climate change.”

AI for Earth is not the first time that Microsoft has designed grant programs to boost its contacts with businesses. If you recall, an earlier incarnation of Microsoft Ventures, before it became a corporate VC arm, included BizSpark, a program it started running in 2008 aimed at giving software packages and access to Microsoft’s other services to small businesses.