Amazon’s decision to deeply discount its voice-powered Echo devices for Prime Day appears to be paying off for the online retailer. Though Prime Day is still underway this afternoon, Amazon has already sold more Echo devices than it did on Prime Day last year, it says.

Specifically, it has sold more than twice as many Echo devices here in the U.S., compared with Prime Day 2016, and more than three times as many worldwide. Insiders at the company, according to one source, say that Echo devices are selling at a rate of “thousands per minute” at the moment. Echo Dot appears likely to sell out first, the source added, although there has been unexpectedly high interest in all of the Alexa-powered products.

In other words, although the likes of Google, Microsoft, Apple and maybe more also want to flood our homes with voice-powered speakers, the first mover is still bringing in its own tsunami of buyers.

For comparison’s sake, Amazon Prime Day 2016 had led to a 3x increase in Amazon device sales, including a 2.5x increase in U.S. sales for its Echo speaker. It seems we’re on track to surpass those increases this year. 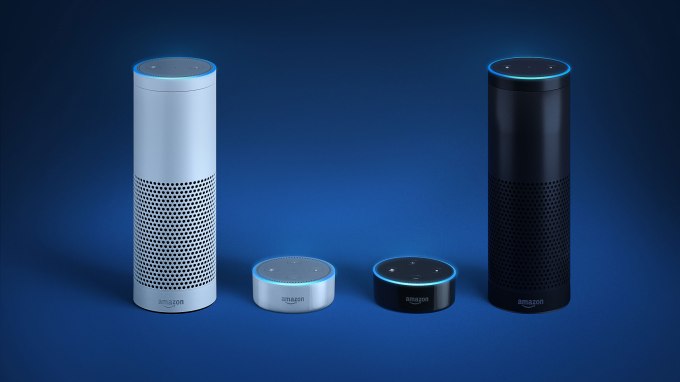 The retailer never announces the actual number of its own device sales, but at least one estimate released in the beginning of the year from Consumer Intelligence Research Partners (CIRP) suggested that more than 8 million U.S. consumers may now own an Amazon Echo device, to give you an idea of the market’s size.

The smart speaker had first gone on sale in late 2014 to Prime members, before becoming generally available in June 2015. Assuming CIRP’s figure (8.2 million) is ballpark correct, it would have represented a 60 percent increase from the 5.1 million CIRP calculated in November.

Of course, today’s bump in Echo device sales can’t all be chalked up to increased interest in Amazon’s smart speaker category.

It’s worth noting, too, that Prime Day 2017 technically started early this year — at 9 PM ET on Monday night. Plus, the sales event has expanded to 13 countries worldwide this year, up from 10 in 2016, which also translates to increased sales. While the U.K. and Germany were both in the Prime Day lineup last year, the Echo had yet to expand to those markets (it came only in September 2016): that too will have translated to a bump.

Prime Day has been a surprise even by Amazon sales standards, it seems. “Prime Day has beat all of Amazon’s expectations,” the source said. “They are shocked by the increase.”

Overall, Internet Retailer is estimating that Amazon will top $2 billion in Prime Day sales this year, or a 20 percent jump over Prime Day 2016. Our source is more bullish and said he wouldn’t be surprised if sales, powered by keen interest in Alexa-based hardware, jump 40 percent.

Internet Retailer’s estimates include marketplace merchants’ inventory. It also believes that the longer hours — a 30-hour sale compared to last year’s 24-hour sale — will be a large factor in Prime Day sales’ increase. 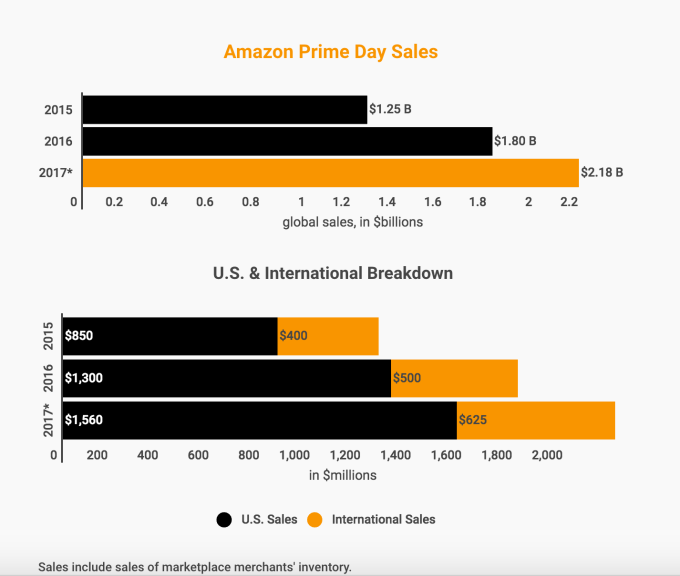 As of 4 AM ET on Tuesday, Amazon said the Echo was the best-selling item across its site in the U.S., after millions of Prime members had already shopped its sales.

It will not be surprising if the Echo family of devices does well this Prime Day. The original Echo received a 50 percent price cut to $89.99, while the Dot dropped by $15, bringing it to $34.99, with corresponding discounts in other markets where Echo devices are sold. Echo currently only supports commands and provides information in American and British English, as well as German.

Other Amazon devices were doing well in those early hours, too, the retailer noted. The remaining U.S. best sellers then included the Echo Dot and the new Fire 7 tablet with Alexa.

Currently, according to Amazon’s own best sellers section on its site, the Echo Dot in black is now the top-selling electronics device in the U.S., followed by the Echo Dot in white and then the white Echo. Various Fire tablets, the Kindle Paperwhite and the Fire TV Stick with remote round out the top 10.

To help connect consumers to those deals they were most interested in, Amazon this year organized Prime Day sales into various categories on its site.

As of this afternoon, Amazon says that its “Techies” category on the site was one of the most shopped, along with “Home Chefs” and “For the Home.” In the Techies section, Amazon is heavily promoting its own hardware — including Echo devices, Fire tablets, Kindle e-readers — as well as bundles like the Echo Dot/Philips Hue Starter Kit, for example, among others. 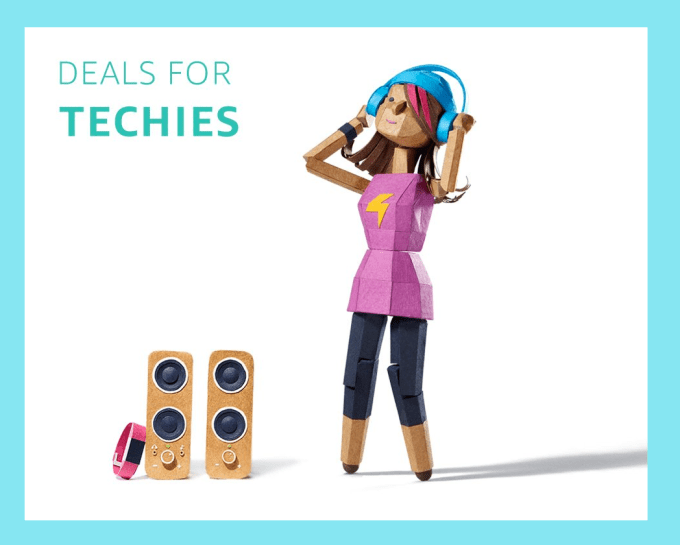 CIRP estimates there are 85 million Prime members in the U.S., up 35 percent from the 63 million in the same quarter last year. That means there are a lot more people who are eligible to shop Prime Day this year, and purchase Amazon’s devices.