You’ve done it. After weeks and weeks of bringing your Overwatch A-game to the table for randos who disappear at the end of every match, you’ve finally found a competent group that wants to stick together.

Guilded (part of Y Combinator’s Summer 2017 class) wants to be the spot your gaming guild calls home; the home base you head back to when the matches and Discord chats are over.

A good chunk of what Guilded brings to the table isn’t groundbreaking in its own right — taken at face value, Guilded is a lightweight forum. Guilds have had forums since back when connecting to the internet meant tying up your house’s landline until DAMN IT WHO PICKED UP THE PHONE?!?

But forums are, for the most part, clunky. Built to work for organizations of all shapes and sizes, they’re hefty all-purpose multi-tools that do what you need and a million other things you probably don’t.

Guilded slims things down to what most gaming guilds might need. In doing so, it’s able to focus on building out tools that can help your team recruit faster and play better — things like a customizable member application/approval flow, a search tool for finding teams/players you’ll get along with or an insight tool that tracks your team’s data and helps identify the best player for any given role in a game.

Once you create a team page, it’ll consist of eight sections:

That seventh section, Insights, is perhaps Guilded’s most intriguing aspect. Currently limited to Overwatch, Insights analyzes your team’s roster and taps machine learning to build well-balanced six-person teams and figure out the best role for each player. By chewing through data made available by Blizzard, Insights is able to analyze things like a player’s kill/death ratio in a specific role, time spent healing, accuracy and more to figure out who’s the best fit for each seat. 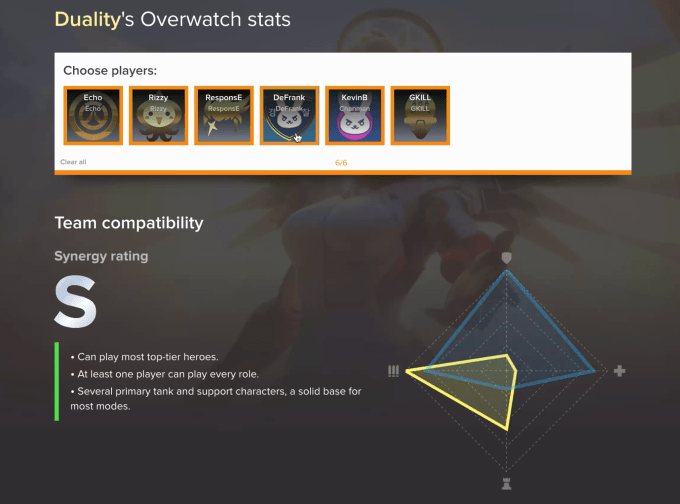 Beyond any individual guild’s page, Guilded also taps its growing base of guilds/players to provide a search engine of sorts — it can help individuals find a team that plays on their platform of choice, or help teams fill an empty slot based on things like a player’s region, self-assigned play style (casual? competitive?), rank and favorite roles. You can keep drilling down to find a player that fits the bill, then message them right through Guilded.

It’s easy to imagine Guilded tying these last two features together: Insights could identify the weak spots and gaps in your roster, and, with sufficient data, search its network at large for the best lone ranger to fill the void. 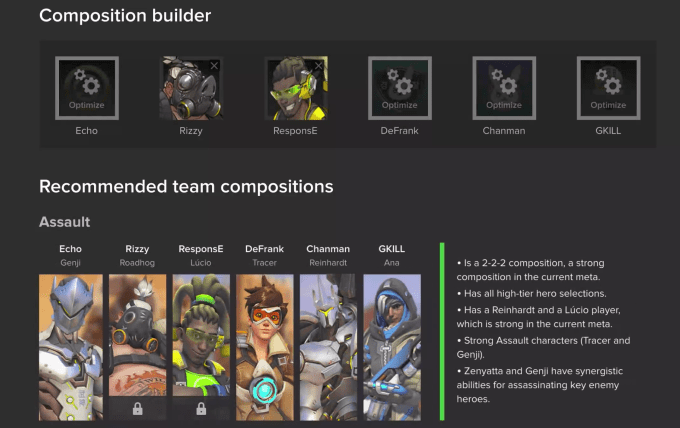 Pretty much any existing guild older than a few hours will already have communication stuff set up — at the very least, they’re probably already chatting on Discord. With that in mind, Guilded hooks right into Discord rather than trying to replace it; link it up, and Guilded can be configured to fire off Discord updates whenever there’s a new post, an upcoming event, or a new member. Discord’s roots are firmly planted and it’s quickly become a crucial part of many a gamer’s day, so it’s smart to tap into it sooner than later.

Setting up a team page on Guilded is free. So how will they make money?

There’s room for ads, of course, both from companies looking to get in front of gamers and from guilds that might be willing to pitch in some coin to get in front of particularly capable players. That calendar, meanwhile, seems like a prime spot for charging tournament organizers to get their events on the radar.

But there’s also the less in-your-face stuff — the optional premium upsells. Things like fancy skins for your guild’s page, or custom emoji.

While some of its features (like the aforementioned Insights) are limited to Overwatch right now, Guilded works just fine for a few dozen other popular games, from CS:GO to WoW. You can check it out yourself right over here